Dustforce is about cleaning in the most stylish, productive way possible. As one of four acrobatic janitors, this seemingly simple concept transforms into an exercise of patience, skill, and frustration. It demands you learn the nuance of movement, the pin-point accuracy in timing button/key presses, the idiosyncrasies of each character. It’s a long, hard road, but stick with it and you’ll find a fantastically addictive, leaderboard chasing good time.

Dustforce wastes no time in getting to the action. After a flashy intro sequence, you’re immediately placed into the Nexus — the main hub — to begin work. You’re given little direction, the only useful piece of guidance being the tutorial. It introduces you to the basics, explaining the core functions of the game in a splendidly succinct manner. Locals of each sub-hub drop hints unsolicited, but they’re typically of little use after an hour of play. The rest — such as the differences between each janitor — is on you to puzzle out.

Each of the four characters plays roughly similar. Their unique factors are subtle, easy to miss in the heat of the moment. Each janitor is designated by color (they have no names, far as I can tell): blue, the most balanced of the bunch; red, basically the same as blue (haven’t seen any noticeable differences); purple, who can triple-jump to compensate for her small stature; and green, who’s jumps are floaty compared to the rest. Also, he uses a vacuum instead of broom. Clearly, he is the most sensible of the bunch. No one character is better than the other, rather it’s simply a matter of choosing who to play as. 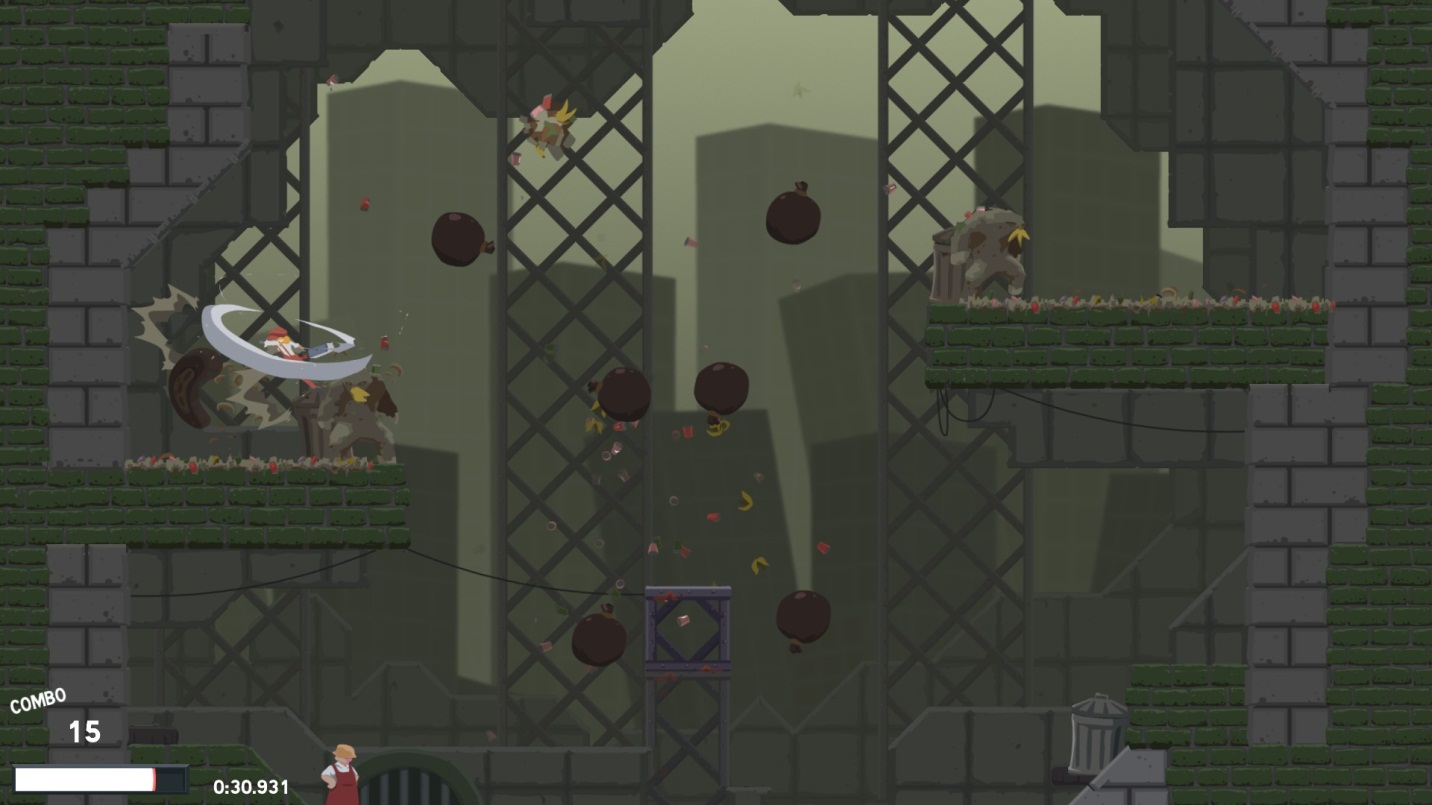 Path strategy changes slightly based on who you play, but the core tenants remain the same. The goal is to reach the end of the course, sweeping up as much dust, slime, garbage, or leaves as possible. Your janitor’s acrobatic prowess ensures that dusting remains quick and simple. You can run on walls and ceilings, slide up and down slopes to gain speed, dash over chasms and spike pits, and smash your way through flying debris with both light and strong attacks. Getting the hang of using those actions in conjunction takes time, but once you become used to it the battle for those coveted S-ranks becomes less formidable.

You’re rated on two categories upon finishing a course: completion, which refers to the amount of muck cleansed, and finesse, which drops every time you lose a combo. Ideally, you want to move through a level without missing a single line of dirt while maintaining a single string of movement. Rarely do things go right on the first, second, third, or even fourth try. All throughout — from the tutorial onward — earning that double S-rank is a hard fought battle. It takes extreme persistence to master each course, to execute every action with flawless timing. But the rewards for success are immense. It gives a sense of gratification like few other victories in gaming can.

…And then you see your woeful spot on the leaderboard.

Thankfully (or regrettably), Dustforce has a replay system in place that allows you to see the run of everyone on the leaderboard. Very handy for learning new tricks and getting a feel for the level. Also great for destroying self-esteem, as the top players mystifying skills will definitely frustrate many who try to emulate them. 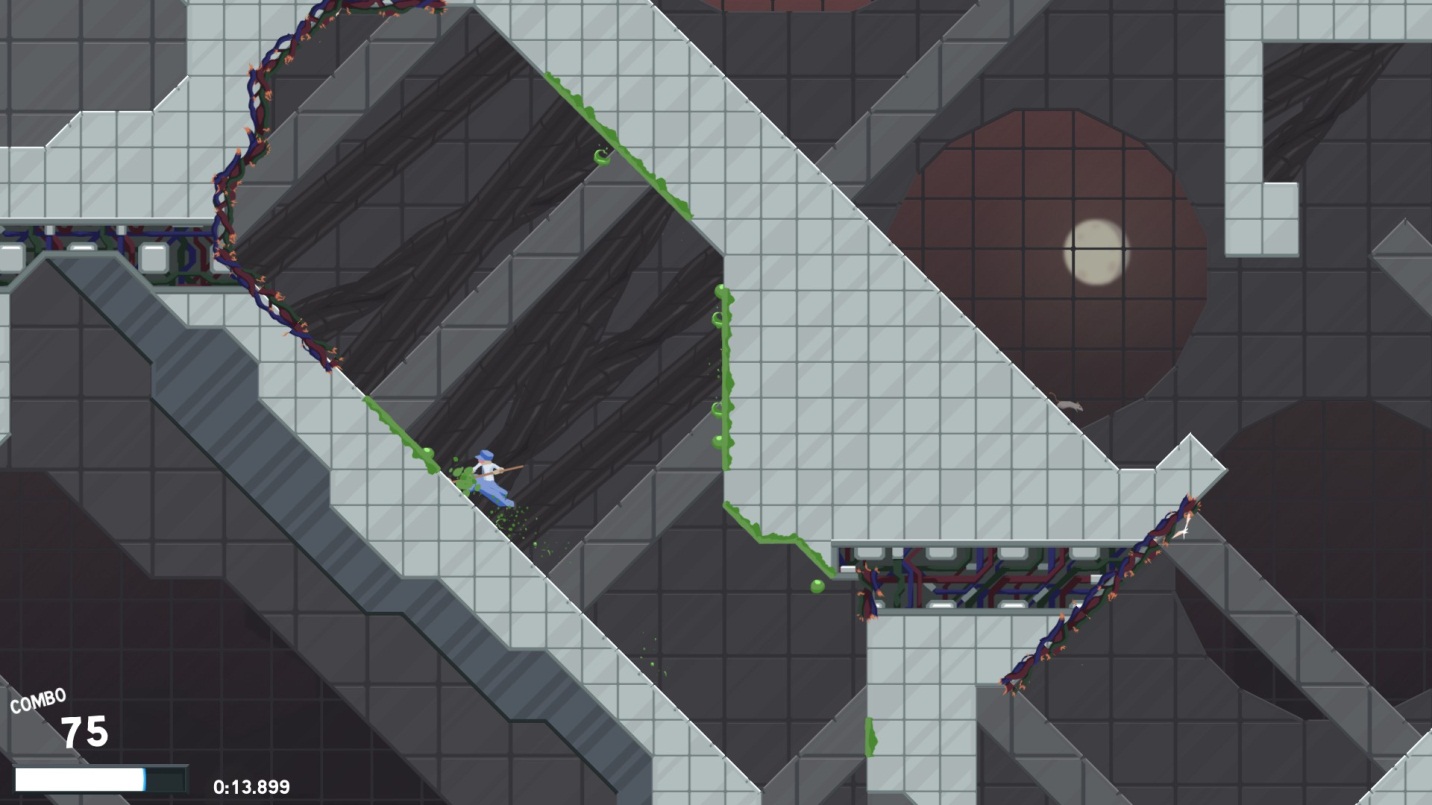 If you somehow manage to work through all the base content, there’s plenty of user-created courses to explore. The means of obtaining them are slightly complicated (players have to go to a dedicated website for the stuff and download them manually, then place in the right folder so they’ll appear in-game because the functions that are supposed to automate the process are unreliable), but the offerings have so far been excellent. And if that weren’t enough, there’s local multiplayer for up to four players.

A bright, clean visual style illustrates the world nicely, animations as smooth as you’d expect out of a game like this. The style keeps the sprites from being expressive, but their movements lend enough character to compensate. Music straddles the line between chiptune and electronica, keeping a calm but upbeat tone that accompanies the art and gameplay swimmingly.

It is this tone of music that strikes such a contrast with the realities of the game. Dustforce is a tough, sometimes frustrating game. The platforming demands a lot of deft action on your part, but the rewards and sense of accomplishment makes the trial and error gameplay worth the effort. The mountain of content and constant drive to improve those ratings ensure there’s plenty of entertainment in store, while the user-level catalog guarantees you’ll never be without something new to play. Dustforce will provide hours of enjoyment and the purchase is entirely justified at the low $10 price.