If videogames could be graded simply based on a list of features, Far Cry 5 would easily be one of the best games out there. As with its predecessors, its map is pretty big, there’s a ton of things to do and the story is as goofy as ever, but unfortunately, none of these things really makes Far Cry 5 be a fantastic first-person experience, because regardless of its lengthy laundry list of features, it manages to be a middling game.

Anyone remotely interested in what the Far Cry franchise has been dealing with since its third iteration will instantly feel familiar with the set up with 5. You’re an outsider dropped into a hostile environment and have to fend for yourself in order to make it out alive. In Far Cry 5’s case, that’s Hope County, the equivalent of the mountain part of Montana, where a radical group of religious fanatics has taken over various parts of the map and aren’t at all keen at having people meddle in. Their leader, Joseph ‘Father’ Seed, and his cronies, three lieutenants you’ll have to take out along the way, are the charismatic hooks to Far Cry 5’s story, along with a few other colorful and somewhat more amicable faces you meet during the game. 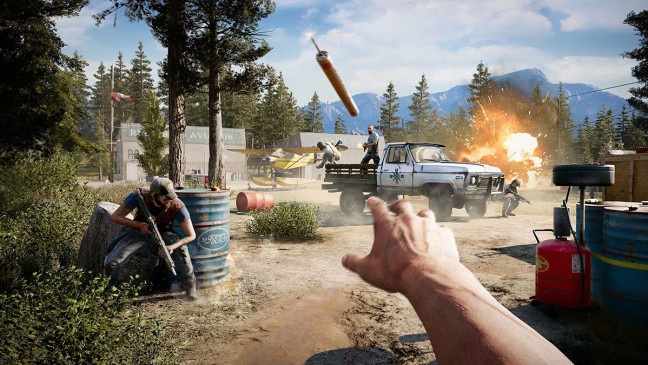 Unlike Pagan Min or Vaas, though, two striking and unnerving personas you fought against in previous Far Cry’s, none of the villains in this game are particularly intimidating, nor carry the same amount of personality as these other ones have. Probably due to having split one central bad dude into three, or just the lack of creativity in terms of writing, there’s just no feeling outside of just plain weirdness that emanates from Far Cry 5’s four main antagonists. That’s even more evident when it forces you to watch their speeches each time you’re captured — the way the gameplay progress has of escalating threat as you take out the forces in each of these leader’s territory — an unavoidable point that repeats throughout the game. Whatever the reason, be it a poisoned dart or simply getting flat out stoned, you’re taken out of the open world and locked into expository cutscenes that end in you somehow making an escape, time and time again.

Still, the progression is the same as it’s been for the last three entries — you eliminate VIP targets, take over outposts, destroy different structures, rescue hostages and to a point hunt — but unlike those games, it’s all in order to get enough points to fill an experience bar so you can actually get to tackle the big baddies. While there’s certainly a lot to do all throughout Far Cry 5, most of it just feels like busy work, and to its worst fault, just plain grindy. That’s especially so when it comes to hunting, perhaps one of the game’s few notable changes in regards to the previous games. Animal parts aren’t used to build character upgrades like bigger ammo satchels or wallets, but are parts you can sell or turn in for quest objectives. The latter seems to take forever to complete because even though areas that are supposed to have plenty of particular kinds of fauna to hunt lack these when you need them the most. 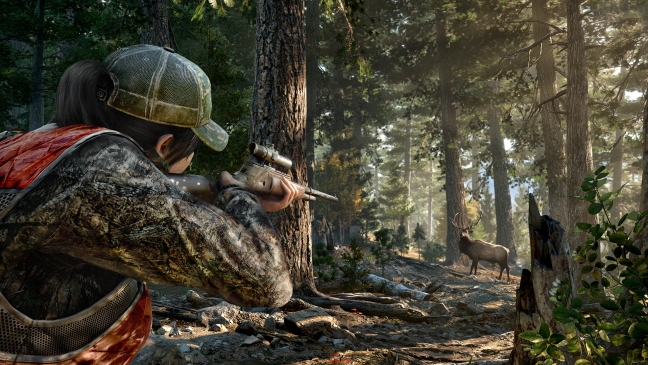 The aforementioned character upgrades and improvements are instead activated and unlocked by spending perk points earned through completing challenges throughout the game, like earning X kills with a certain weapon, killing Y enemies with Z way, the works. Divided into four categories, the perks are as expected like being able to have more than two weapon slots in your inventory to gameplay abilities that would be otherwise available from the get go in previous Far Crys, like being able to fix vehicles, the use of the glide suit and more precision with certain kinds of weapons. There’s no real feel of skill progression when it can all be bought in any order. Far Cry 5 even fails if you like games that let you fine tune your character to fit the way you like to tackle them, because you get a lot of these perk points really quickly, making it pointless to prioritize any series of upgrades.

As a shooter, Far Cry 5 is competent, but not nearly as good as its brethren. It’s just too easy to get taken down by unseen enemies, and although most of them go down in two or three shots anywhere on their bodies, there’s always the one dude with perfect aim who always manages to get a shot in you regardless of how far you are or even if you’re behind cover. That can be somewhat remedied by wearing body armor, but in my case, I decided to take things to the next level by just flying into conflict situations in a helicopter and just blowing things up. It works, but feels brainless. 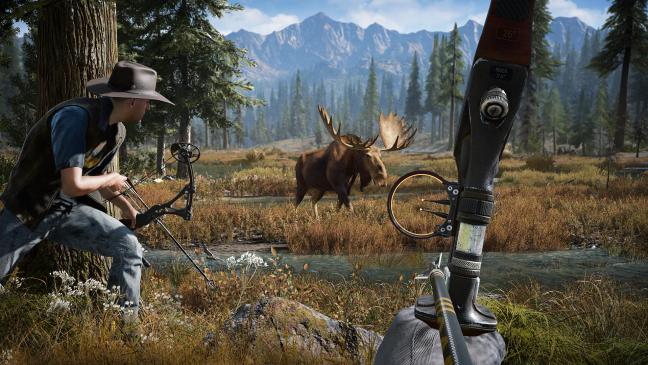 Potential and active combat encounters are somewhat made better by your ability to hire goons to help you out. Be it the human kind, who range from stealthy to guns blazing, or animal, with a dog, cougar and bear, the artificial intelligence employed to run your allies in Far Cry 5 is frustratingly limited. And it seems the game is designed to play around that fact by simply making enemies seemingly ignore your allies unless they’re in active combat with them, meaning that during stealth sections, things only turn sour if you are seen or they’re caught attacking someone. When the crap hits the fan, they tend to be overly aggressive, forcing you to run back to them in order to revive them, which gets old really quick. Thanks to the many checkpoints and procedural encounters along the way as you explore the fairly large map of Hope county, you’ll often be forced to come to their rescue, even more so if you are flying and have one of the animal companions in tow.

Although the story initially manages to touch upon some sensitive issues in regards to the current state of politics in the US, it isn’t by any way as pervasive or shocking as it could potentially be. Every situation is comically exaggerated for the sake of throwing off any sense of seriousness, which just makes it all feel toothless, with nothing really at stake at any point in the game, even more so when it repeatedly allows you to miraculously get away from situations you’d otherwise clearly be screwed. That just happens way too many times for Far Cry 5 to be taken seriously in any sense. It amounts just a dumb ride, and even at that, it’s not at all exciting or rewarding, but just busy.

Review: The hotter Black Ops Cold War gets, the more of the same Call of Duty it remains https://entertainium.co/2020/11/25/call-of-duty-black-ops-cold-war-review/

Review: It’s always a good day to be a viking in Assassin’s Creed Valhalla https://entertainium.co/2020/11/24/assassins-creed-valhalla-review/