There shouldn’t be nothing more in life that pays off more than working hard, right? Wise people often say that regardless of how much work you put into something, if you don’t do it truthfully, it won’t matter in the end. But imagine yourself finding the line of work that you truly love and have some talent in, like the protagonist in Moonlighter. In his shoes, you head your family’s traditional item shop, and at night, you have to go out and gather new inventory to sell. In Moonlighter’s case, the more and more work you put in, the better your time.

Then again, it’s quite easy to mess up in this gorgeously crafted Zelda-inspired isometric indie dungeon crawler. That’s because another monniker should go along with all of those in the previous sentence: roguelike. Meaning that each time you fall in battle, you lose everything you’ve got, including your hard-earned collectibles and even worse, whatever crafted equipment you might be carrying in your backpack. This makes every trek outside a measured experiment in just how far you’re willing to take it before you have to go back and open up shop.

The shop part of the game is one of its coolest mechanics. Any item you manage to find during your nightly excursions in Moonlighter’s randomly generated dungeons you can either save up or post for sale in one of four spots in your shop. But before really cracking into the whole profit side of running the store, you have to first figure out how much these things are worth, which you do by experimenting with prices and seeing your customers’ reactions. Supply and demand is at full effect, so even when you do settle into a groove of knowing what to sell particular things for, it’s smart to keep an eye out for swings in its market demand. 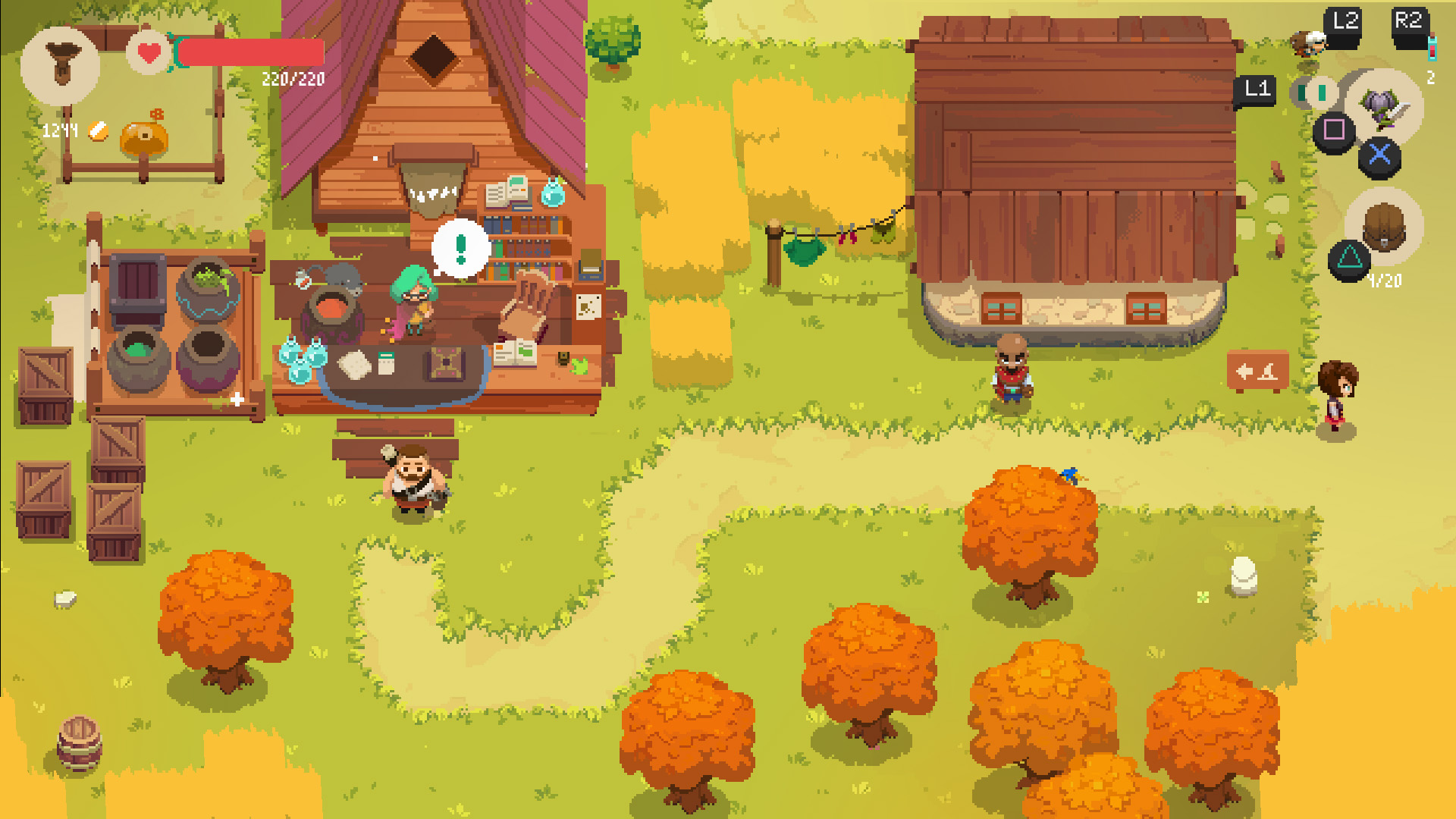 Saving up some dough, as mentioned before, is paramount to expanding your powers in Moonlighter. Not only do you use gold to improve your arsenal — along with crafting items that you should pay heed not to blindly sell! — you’re also tasked with revitalizing your shop’s surrounding town by contributing to the constructions of other shops and stands, such as the blacksmith who will help you create your gear and a friendly alchemist that sells you health and other kind of potions. It gets really expensive really quick, so that balance of whether or not to sell the apparent junk you find is really played up, and will probably be the determining factor in less than willing players’ decision to keep going.

However, if you do stick with Moonlighter, there’s indeed plenty to enjoy in the act of working hard, grinding out, and most importantly, saving up. While the idea of repetition will probably sound terrible to you, since every run in the game is different, there’s a relative sense of freshness in each run, even more so if you push yourself to press on and get farther into a dungeon, eventually reaching its boss. That’s where Moonlighter’s not at all hidden true mission lies: unlocking a legendary mother lode by clearing all of the game’s dungeons and acquiring a set of keys.

I haven’t reached that final stage myself yet, but the promise of a big payoff to Moonlighter’s slow and busy progression works as a good push to keep me going for just “one more run” as I repeatedly die during my runs. Can’t be sure if I’ll ever reach it at any point, but I’ve got more than enough incentive to keep pecking away at the game once I have more time to devote to it — it’s E3 season, after all!

Moonlighter’s whole gameplay loop is sure to play up to others like me who enjoy to look towards a reward that isn’t attainable right away. It’s the tiny goals that drive us, the sort of thing that can turn a game into a quick pick up and drop down experience that can run you mere minutes, or keep you up for hours. Aiming for a specific item’s crafting material list is one of these of-the-moment goals that works extremely well with which Moonlighter is chock full of.

And that’s all without mentioning just how charming this game is. Graphically, it’s another example of the incredible pixel art work that indie teams are so good at pulling off, so hats off Digital Sun’s work. The writing, funnily enough, can get too wordy at times, keeping you away from the action for too long, but even longer journal entries you might run into are worth checking out, not only for their clever flavor text, but also for their tips in upcoming traps or treasure locations.

Moonlighter is the type of game that will appeal to anyone looking to feed their nostalgia while at the same time having somewhat of a different experience. It feels and plays like Zelda, but instead of simply being a drooling homage, it goes beyond, and delivers a quality time, in spades.

Review: Fight alongside your clone brothers yet again in Republic Commando https://entertainium.co/2021/04/17/star-wars-republic-commando-review/

Review: Stronghold Warlords is a continuation of a series that is frustratingly stuck in the past https://entertainium.co/2021/04/16/stronghold-warlords-review/

For the good ship @Entertainium, I got trapped in a cursed mirror so that I could review magical roguelike Dandy Ace. https://entertainium.co/2021/04/15/dandy-ace-review/