You wake up to a knock at your door. You get out of bed and open the door. A well-dressed robot stands on the other side — one of the staff members of the hotel. He informs you that you requested a wake up call at this time, and tells you that breakfast is ready downstairs. He wishes you a good day and closes the door. Seems like just another average day at a hotel, but something feels… strange.

Suddenly something behind you begins to ring. It’s a pone — a rather odd looking one; circular with a screen in the center — hidden beneath the pillows. Odd. As you make your way downstairs to the restaurant, you notice something: the place is oddly empty. There’s no signs of other guests around; just you and the hotel staff. Then your phone starts receiving messages telling you to “act normal,” promising to “free you.”

The Spectrum Retreat is a puzzle game wherein you attempt to figure out what the story behind this place is and why you’re here. The game follows Alex, a guest at a virtual called The Penrose, who’s contacted by one of the engineers (who goes by Cooper) and promises to help him escape. Cooper suspects Alex is being held here against his will, for reasons unknown to both of them. Alex’s memories have been repressed, and, according to Cooper, he has to recall them himself if he wants any shot at getting out. 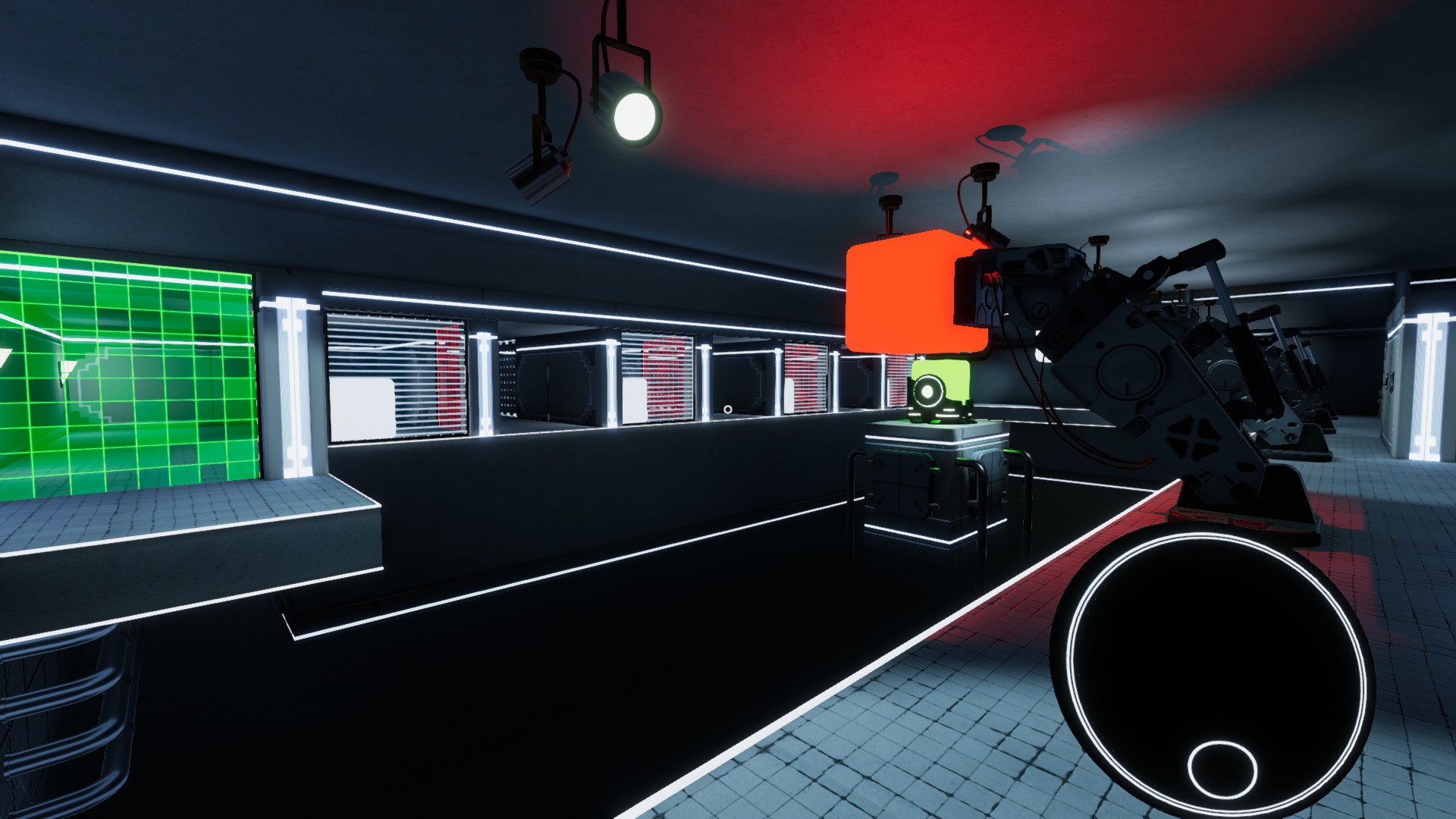 They go about doing this by way of completing “authentication challenges” that act as access ports to the back end of the simulation. But first you have to get the access codes. You do this by scouring the hotel for clues, whether it be the code printed clearly on a door knob hanger or rearranging hotel decorations until their reflection reveals the answer. Once inside, you move about absorbing colors and transferring them via large blocks to open the way forward. The color you hold (red, green, blue, white) opens the corresponding gates. The goal of each chamber is to reach the exit. At first, the puzzles are a simple matter of transporting colors to the correct blocks to open the way forward: a simple task whose only challenge is to figure out which blocks need to hold which colors. But once abilities like teleportation and gravity shifting come into play, the game wastes no time in upping the complexity of each room.

The order of operations becomes a lot more particular, which makes it easy to slip up and end up stuck. That only happened to me a few times, thankfully, and it wasn’t much of a problem when it did happen either. At most, I lost only a few minutes of progress, able to jump right back to where I screwed up in no time. The Spectrum Retreat is careful not to increase the difficulty too quickly. Each set of puzzles gives ample room for you to familiarize yourself with the mechanics of each new wrinkle before layering on more. By the end, the challenge isn’t so much in color transport, but resource management as you start being able to generate and remove colors from the play field at will.

Most of the puzzles in The Spectrum Retreat give you a set amount of colored blocks to work with. Say you start with three red blocks, two green blocks, and one white. Knowing that you only have so much to work with makes it easier to figure out where everything goes because you have everything you need. Now say you have a similar number of blocks but only a couple of them have any preset colors. In that case, your job is to generate more and figure out just how much of any one color you need and where to proceed. That combined with teleportation and gravity shifts make what otherwise look like simple puzzles into something far more complex.

As you complete these rooms, you eventually start to see the hotel’s facade begin to crack. Paintings are replaced with blurry pictures from repressed memories. Objects and furniture start to flicker and glitch out. The hotel staff begin to malfunction. The game constantly reminds you that this is a digital space — which is clear once you start exploring and realize the hotel’s layout feels almost non-Euclidean at times — and the way the game depicts it falling apart are effective. The first couple times I encountered the artificial graphical glitches, I thought the game had bugged out.

The deeper you go, the more Alex’s memories seep into the challenge rooms as well. At first it’s small and infrequent — part of a kitchen appearing in the corner of a room — but soon enough they start taking up more space, start appearing more frequently. Hospital waiting rooms materialize and letters lay scattered across tables and desks, each granting a glimpse at the events leading up to Alex’s stay at The Penrose.

If I have one gripe, it’s that The Spectrum Retreat doesn’t feel as cohesive as it could. While the puzzles and story generally gel together well, there’s a sense the game treats them as two opposing elements. Though the surrounding context for the puzzles makes sense and fits the setting (given the hotel’s but a simulation, it makes sense they’d have backdoors inside it for engineers to access), the actual puzzles themselves lack that same attention to detail. It feels like something that was designed independently of the rest of the game before being stapled on later. But I digress. The Spectrum Retreat does what it does well, and I enjoyed my time with it. If you’re in the mood for a good first-person puzzler, The Spectrum Retreat is worth visiting.