Sword Legacy Omen is the newest attempt at borrowing the tactical gameplay that made the XCOM, Jagged Alliance, Shadowrun, The Banner Saga series so much fun and applying it to another theme. This time, we’re joining up with King Arthur’s dad Uther during his younger days, as he fought to reunite with his merry band of knights and save what’s left of his dear Britannia. If you are the least acquainted with English history, you probably know his efforts will ultimately be in vain. Still, Brazilian developer Firecast Studio managed to make an entertaining an easy to pick up game out of that premise, thanks to its simplified tactical options, colorful cartoon visuals, and a story that twists history for the sake of delivering a fun experience.

Starting out with only a few units, including Uther, Merlin, and a couple of throwaway no-names of legend, you make your escape from a lost bastion in search of the kidnapped queen, who was taken after the enemy did away with the king in an attempt to take over the land. Along the way, you pick up other party members and are able to shuffle them into the four person team who you take into each of the game’s missions, which are split into chapters that make up Sword Legacy Omen’s story acts. 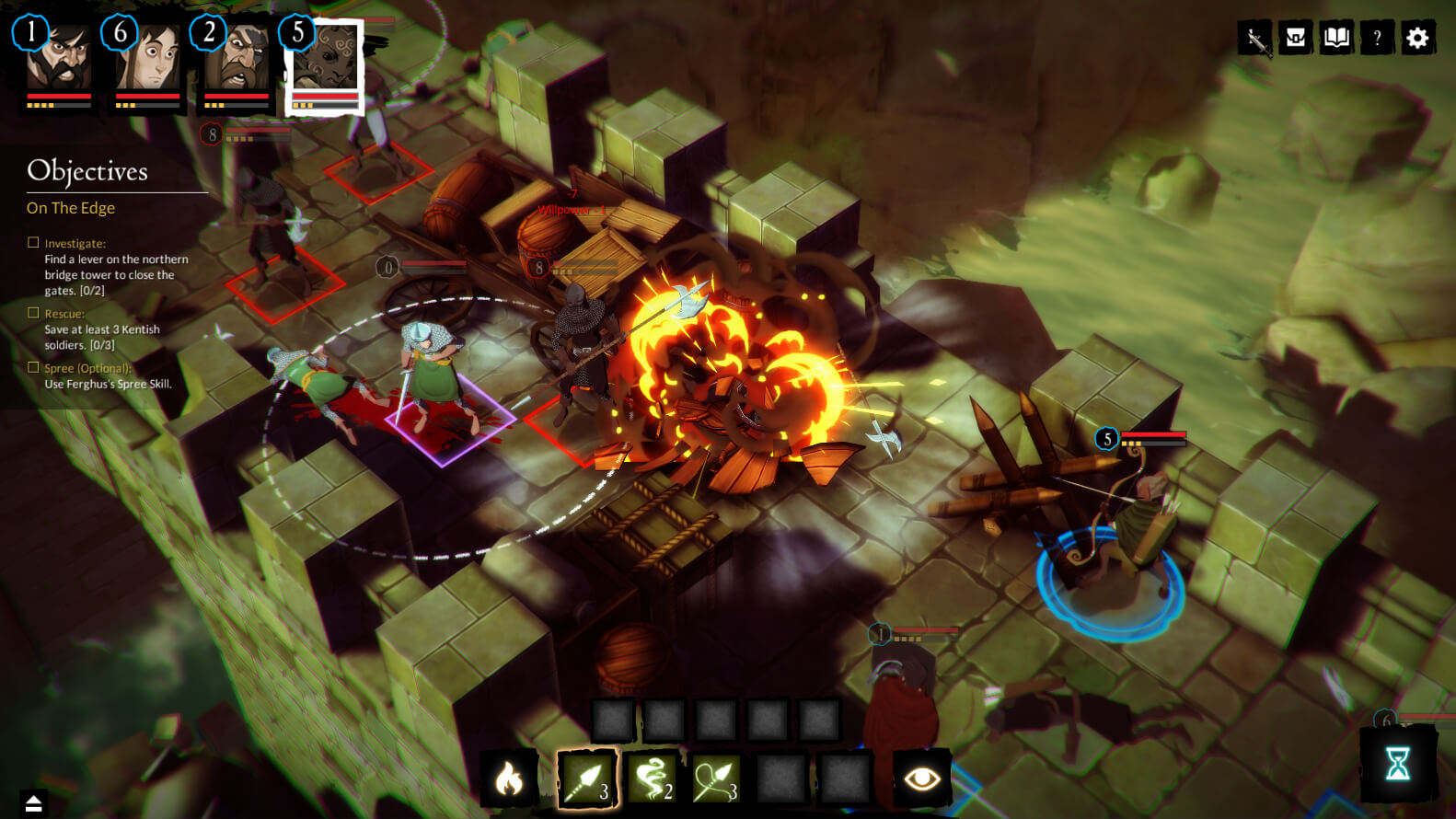 The story itself moves at a brisk pace via somewhat animated cutscenes and dialog boxes, making use of the game’s great cartoonish art style that helps give the cast a lot of personality. The writing itself is all over the place in terms of tone, and some of the characters come off as a little too modern for their own good, breaking the immersion that the game is supposed to take place during that particular time in history. Still, for what it aims for, that is, being a game set on a fantastical history world where magic and the undead are commonplace, it does enough to satisfy the needs of moving the group along from point to point.

Other elements of the story are delivered through text pickups you scoop during your exploration phases during levels, before engaging into battle. They help build the lore of the game and give context to what’s going on in at the time, but in terms of long-term gameplay benefits, there’s nothing really to be gained by collecting these, other than checking a box at the end of the mission. When it comes to combat, the stakes aren’t too high either, especially considering the inspirations behind the game.

There’s no permadeath in Sword Legacy Omen, for one. Knocked-out party members receive a penalty to their health pools and aren’t as effective if taken straight into a level without resting at a camp first, but other than that, the game is pretty lenient when it comes to keeping your crew alive. In terms of customization, you accrue a pool of points that you can use to buy new skills for your characters, and those are mandatorily required to be equipped before each mission, keeping in mind that there are only a set number of skill slots per hero.

Those skills come into play during the combat, which is entirely grid-based, influencing the range of your attacks and other abilities, such as healing, and of course, movement. Considering the time in history the game takes place in, it’s understandable that most of your fights will be among melee-based enemies, but for the few ranged guys you come across, there’s a fairly useful cover system that you can use in order to keep some form of defense before you’re able to cut the distance and punch their face in. And thanks to a class-varied crew you slowly assemble all throughout the game, there’s a certain level of strategy you can apply to your team composition, depending on the mission and how you want to tackle it. 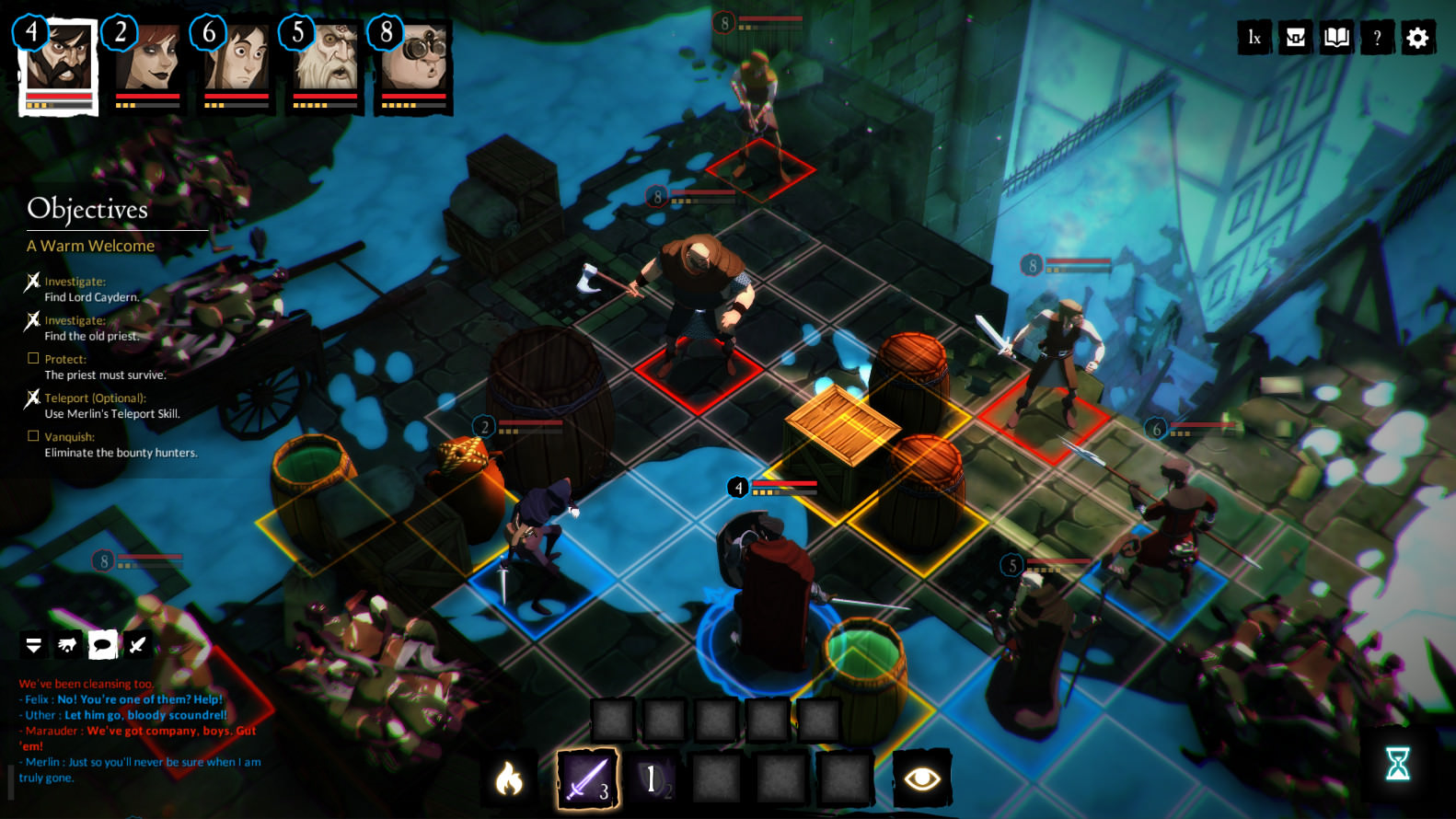 I didn’t particularly have a whole lot of trouble with combat difficulty once I got accustomed with how Sword Legacy Omen’s interface works, which is to say not as smoothly as I would’ve hoped. Cursor movement is slow and twitchy, which makes moving and selecting units sluggish, even more so when scrolling the screen can only be done with the WASD keys and not just by moving the mouse to the sides of the screen. Getting over the hump will prove to be the biggest aspect going against this game, which is otherwise pretty honest in its delivery.

Given that Sword Legacy Omen tends to lean into the more budget side of gaming, it’s impressive it follows up on its premise so well. If you’re not looking for historical accuracy, you’ll find that this is a decent entry point into the tactical combat genre, and even if you’re already into that style of game, there’s enough here to justify its small price tag.


The game code for this review was provided by Nuuvem.