My most recent run in Mana Spark was easily my best one. My build was as close to perfect as I could hope: I could fire multiple arrows per shot, the cooldown between shots almost nonexistent; my attack power was such that I could kill everything in one or two shots, thanks to my arrows inflicting poison on hit and the double damage received from bouncing them off walls; every few kills would restore a bit of my health, the surplus of food being dropped along with my health potion ensuring I could always recover from whatever wounds I suffered. Everything was going smooth as could be.

Then I died just short of finishing off the final boss.

It was inevitable, of course. A run that good could only end in spectacular failure. After struggling for the first few hours, to come so close to a near perfect run in the end feels like the perfect summarization of my time with Mana Spark. 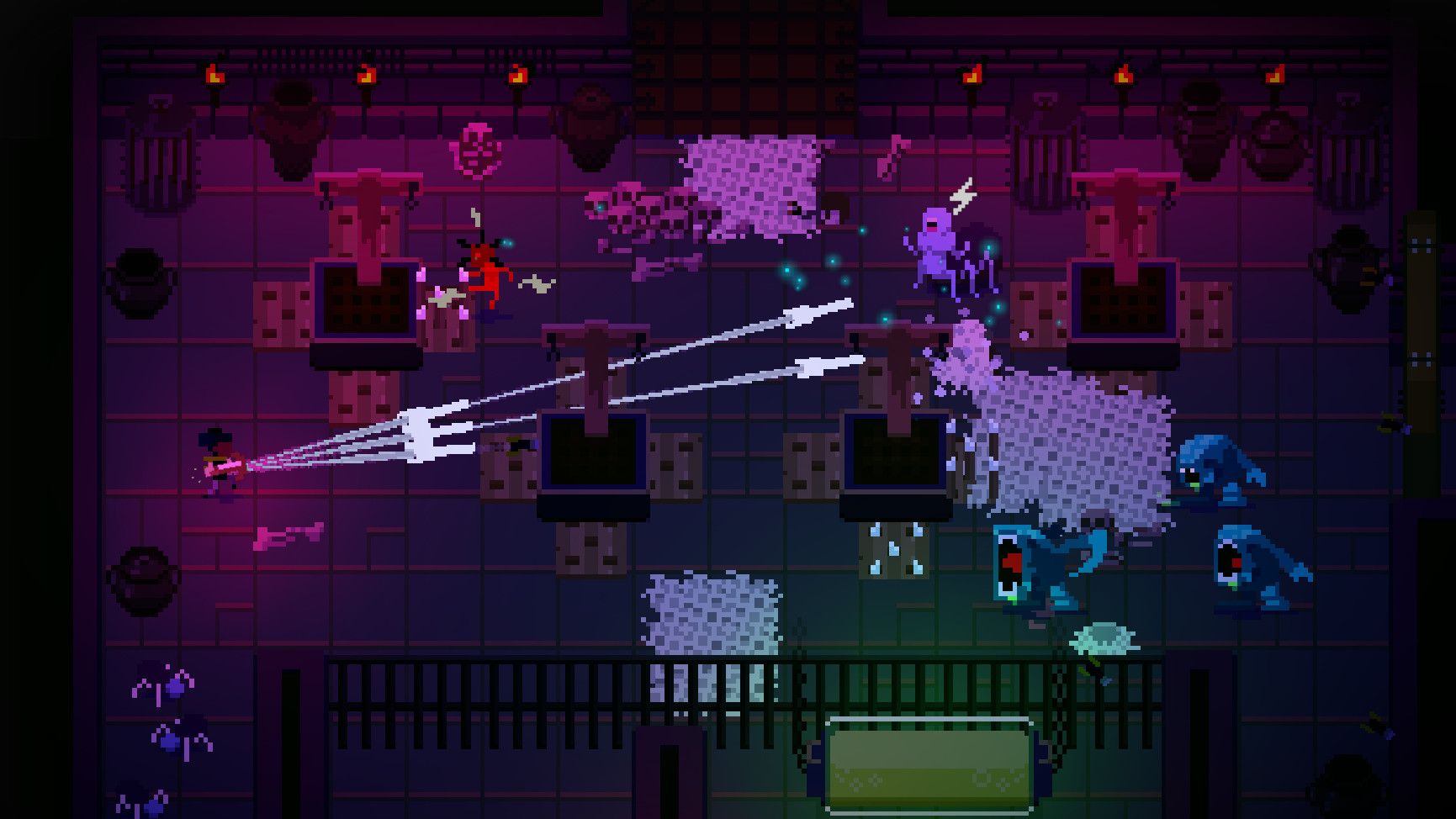 Mana Spark follows a small band of humans on a mission to free their brethren from the clutches of the monsters who’ve enslaved them. Story goes that, of all the races in the world of Mana Spark, humans are the only ones to be unable to use mana, a very powerful and sought-after source of energy. As such, they’re extremely vulnerable given how outmatched they are. The core loop revolves around making runs for mana runes that can be used back at camp to unlock new items, food that provides buffs to your stats, and the ability to weaken certain types of enemies. With each new unlock, the game becomes far easier, but the costs also soar quickly.

At first, you only start with one character: the hunter. Equipped with a bow and arrow and a dodge roll, he’s the most well-rounded of the trio. There’s also the soldier, who uses a crossbow (which allows her to move and shoot at the same time, unlike the hunter, but comes at the cost of lower attack power and health), and the knight, who uses a sword and shield, trading the ability to dodge with blocking and deflecting attacks. You unlock the other two characters as you go, able to swap between them at will back at camp.

For the first couple hours, Mana Spark wasn’t grabbing me. The base stats of each character make playing them a slog, due to slow, weak attacks that make combat a chore. Some of the upgrades you can pick up between stages alleviate those problems by granting you faster attack speeds, higher damage, and character specific abilities, but that’s assuming you’re able to progress far enough to grab a bunch of them, let alone have the coin to afford them. One or two on their own don’t make much of a difference.

The problem is how slow progress can feel sometimes. Most of the items and stat buffs you can buy at camp cost a fair amount of runes. Enough that you’re going to have to save up to afford most of it. On paper, that’s not necessarily a problem. Getting progressively stronger over the course of a run — or unlocking upgrades after each run, in this case — is a natural part of what makes a lot of roguelikes engaging. Assembling a character build specific to that run is part of what makes each playthrough different. But in Mana Spark‘s case, until you unlock enough decent stat-boosts you can apply at camp, the process of assembling a build isn’t much fun because you have to spend a large amount of time stuck playing these characters in their weakest forms. It doesn’t feel like you’re getting stronger so much as it feels like you’re raising them to a better baseline.

But as I started unlocking more buffs and applying semi-permanent upgrades to the characters, Mana Spark began to click. Where before the action felt a bit slow, now it felt fast and satisfying. No longer were enemies taking forever to slay, no longer was I trudging through each floor of the dungeon; now progress was consistent and steady. The change is pretty clear: when I was stuck with only one character whose base stats were not great, it felt like a slog. Slow attack speed, few hit points, and low damage output made fighting even the simplest adversaries a nuisance. Apply a few buffs, however, and things suddenly started to go much more smoothly.

With each of the characters now starting with better stats, any upgrades I picked up felt much more meaningful. I didn’t have to prioritize damage or survivability above all else. Higher hit points meant I could potentially sacrifice health for better damage now, for instance, since I wasn’t working with two or three hearts tops. Better base damage meant I could focus on more supportive buffs since it didn’t take forever to slay anything. The potential trade-offs become a lot more fun to consider once I no longer felt so fragile.

I enjoyed my time with Mana Spark a lot more once I turned that corner, but I wish it had come sooner. Though each individual run is short — they usually last 20-30 minutes at most — that it takes a few hours to unlock a lot of the quality of life improvements makes it a bit of a time investment. It’s a solid game on the whole; you just have to be willing to stick with it to reach that point.

Review code for Mana Spark was provided by Nuuvem.