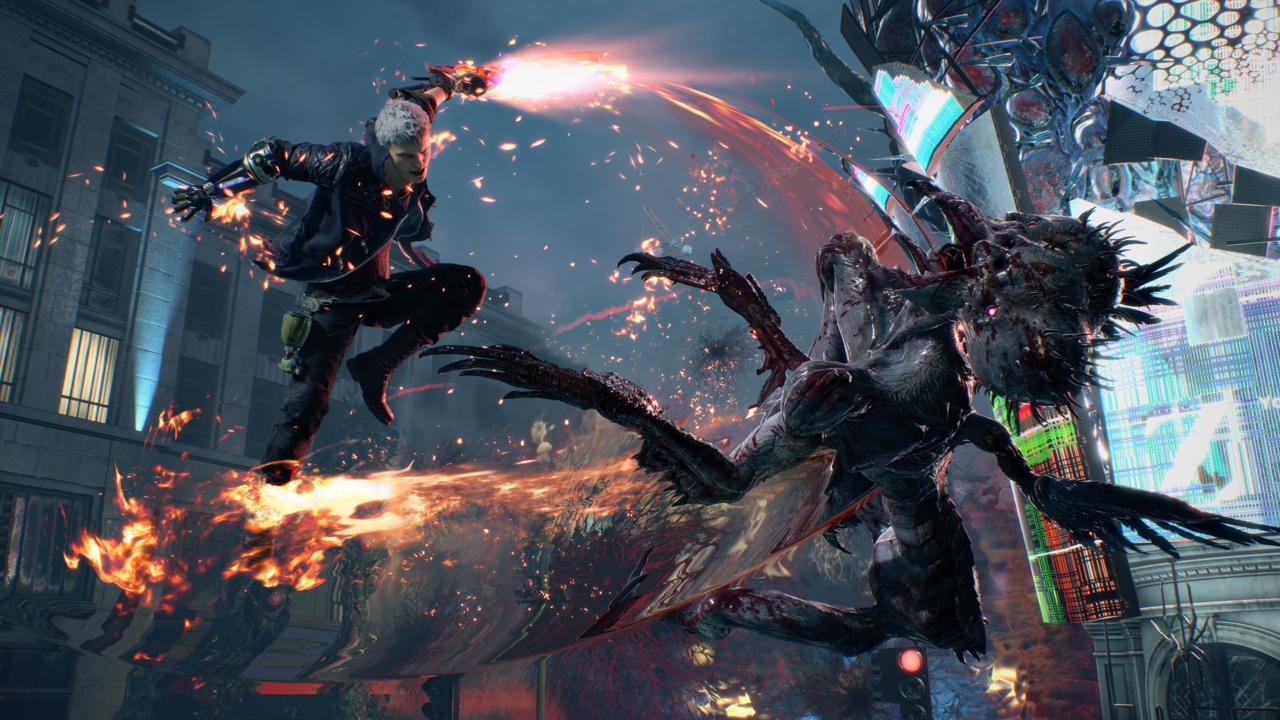 Devil May Cry V makes a great case for just how well a game can be adapted to be played by a wide range of people, providing a fun experience regardless of skill level.

Character action games have come a long way since the days of the PlayStation 2. The genre has gone through a series of transformations over the years, even so far as to take a break, only to make a fantastic comeback in recent times. Following God of War’s incredible re-imaging comes Devil May Cry V, a new, better, and incredibly gameplay-heavy faithful follow-up in the series that pretty much coined the terms character action.

Differently from last year’s God of War, at no point does the new Devil May Cry attempt to distance itself from its colorful history. It’s a web of convolution for sure, but the fifth mainline Devil May Cry (not counting 2013’s failed reboot, DmC: Devil May Cry) carries forward the tale of the two warring brothers born from the doomed meeting between devil and human. Series’ protagonist Dante is once again playable, as well as Nero, who starred Devil May Cry 4, and making his debut, V, a mysterious figure who can control demons and looks like he fell out of a Sandman graphic novel. They’re off to stop a demonic tree from taking root and sucking the world dry of human blood, killing all manner of monsters along the way.

The Devil May Cry games have never taken themselves seriously, and Devil May Cry V certainly does not stray far from the traditional silly nature of previous games. Although very violent and bloody, there’s a definite sense of humor throughout the entirety of the game, which really makes me think the developers had a blast working on it. If that aspect of DMC V isn’t enough proof, you’ll have to check out the alternative cutscene videos throughout the game — they pretty much play off the CGI action, only with actual people and incredibly silly visual effects. It’s by far one of the most fun extras in a game in quite a while, and the entire run is totally worth sitting through for laughs. You can also watch a recap of the events of the franchise so far, which honestly made me more confused about the entire thing, no joke!

As for gameplay, this is my favorite Devil May Cry yet. As faithful as it is to the style of play that made the series famous, it also goes a long way into being way more manageable and playable by a wide range of skill levels than any of its predecessors. The older games are known for their high degree of difficulty, so far as forcing Capcom to even release an easier ‘special edition’ of the third entry, which was deemed too hard by the public. It’s incredibly surprising and impressive that Capcom has gone so far in making Devil May Cry V so playable, even for fans like myself who aren’t particularly good at handling its systems. Surely enough, things get way more complicated once you toggle the difficulty settings up a notch, but at the outset, the second highest starting difficulty mode proved to be very possible for me to play through the entire game, while keeping me on my toes with just the right amount of challenge.

That’s all thanks to a friendly continue system that allows you to spend red orbs — the currency you earn while fighting that otherwise allows you to buy new moves, items or powerups — in order to give you an extra oomph when your lifebar runs out. That, or if you find yourself carrying one, you can also use a golden orb, a rare item that refills just about every bar in the game. The catch is that every time you burn red gems, the cost goes up for reviving during the same level, so this leg up isn’t infinite, unless you want to burn through your reserves and leave nothing for upgrades. And man, you’ll want to upgrade your abilities because they’re a blast to use.

Throughout the game you’ll get to use all three characters, sharing the same red orb pool in order to buy upgrades with, and these range from mere movement boosts to new moves that can be stringed into combos. It’s a good thing that red orbs are so easy to come by, because none of these moves are particularly complex to pull, which makes game quite easy and flexible to play, and linking moves should quickly become second nature to you. The protagonists share the same control layout, having melee, ranged, and special attacks mapped to the same buttons, but their use depending on which character you’re controlling is obviously quite unique.

For instance, V doesn’t directly participate in encounters, and instead lets his demons do the dirty work, only popping in when it’s time to finish off a target since none of his three creatures, a bird, a tiger, and an elemental giant, can only deal damage to enemies, not kill them. Nero, having lost his right arm in the previous game, now can use different prosthetics that offer a bunch of different effects alongside his trusty motorized sword, pulling enemies up to his reach or the opposite, closing the gap during combat. He can explode whatever arm he’s using in order to get out of sticky situations, instantly replacing it with whatever arm he has in this inventory, which shakes things up considerably during fights, adding an extra amount of strategy to the whole thing, since there’s only so many replacements he can carry at one time. Dante is by far the most complex of the three, since he’s broken up into a few different stances, and has a host of different weapons to make use of, like a set of gauntlets that do a crazy amount of burst damage (my favorite means of fighting), and even some nunchakus, a later game unlock that transforms into different weapons depending on the stance that he’s in.

For as different as each of these guys are, or even as daunting as Dante might seem at first, they quickly prove to be quite easy to get into, and it won’t take long before you find one that best suits your personal style. And even though you don’t always get to pick who you’ll use — that happens only in a couple of missions, due to story restrictions — even when playing with a particular character you might not be so fond of using, they’re still quite fun to control. Like previous Devil May Crys, there’s an immense level of depth to be found in Devil May Cry V’s combat system, and if you decide on partaking on any of the unlockable difficulty modes, you’re gonna have to learn its ins and outs for sure, because that’s where you’ll find the legendary difficulty that’s otherwise quite lacking in both of the initial set of options that the game offers during the first playthrough.

Levels (or as the game calls them, missions) aren’t that varied in terms of design per se, as most end at a boss fight after taking you through a series of combat encounter arenas, and sometimes even some light platforming along the way. Thanks to the sizeable enemy type variety that is very generous all throughout the game, introducing new foes to fight against every so often, the action never gets grating or repetitive, even more so due to the sheer amount of options at your disposal in order to defeat them.

Devil May Cry V makes use of the RE Engine, the same one that was used for Resident Evil 7, as well as this year’s Resident Evil 2 Remake, and it shows. Character models look fantastic, with the three playable characters and the side cast are especially lifelike and well animated. Nico, a crazy southern accented lady with a venom tongue who happens to be the trio’s weaponsmith steals the show every time she (quite literally) bursts through in her van whenever you call her during levels, helped by some great voice acting, and a authentically funny script. The score isn’t anything to sneeze at either, which helps ramp up the excitement during all of the over the top action, with plenty of vocal tunes that aren’t grating at all. There’s even an option to listen to the previous games’ soundtracks in the deluxe version, a nice nostalgic bonus for returning fans.

Quite frankly, Devil May Cry V makes a great case for just how well a game can be adapted to be played by a wide range of people, providing a fun experience regardless of skill level. For the easy going, ‘pick up and play’ers out there, there’s just the right amount of challenge and content to be found, and for the hardest of hardcores, they’ll have layers to crack through in this one, especially if they’re looking to earn all of its achievements/trophies. Devil May Cry V is an extremely impressive effort by Capcom who’s been burning up the charts lately with some excellent releases.