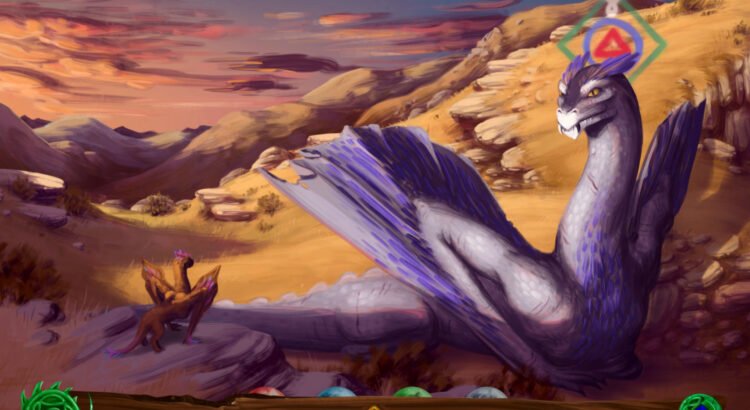 There was a moment a ways into my time with Golden Treasure: The Great Green that I think sums up my time with the game pretty well:

Down near the southern part of the forest, there was a… thing — an evil spirit, you could say. Red eyes, a threatening demeanor, a malevolent aura: all the usual signs of something bad. When I first investigated it, all I could do was run because I wasn’t strong enough to fight it head on, nor did I have any means of banishing it. It’d been a while since then, and now, being stronger and having connected with the spirit of the land itself, I figured now was the perfect time to try and do something. I had two options: try and fight it head-on and possibly succeed; or I could take a few days to prepare and safely banish it instead. I chose the latter.

The spirit didn’t take well to that. It fought the entire time — tearing away at me, leaving me utterly battered by the time all was said and done. Not as simple as I hoped it would be, but it got the job done. Better than trying to fight it head on. Was gonna need a few days to recover before doing anything else, though. So of course the next day a dragon shows up with an entourage of followers looking to contest my territory. It was about as bad a situation as could be: a fight I can’t avoid in front of me right as I’m at my weakest. My only options were to fight and assuredly die or surrender.

I decide to fight: if I’m done for either way, may as well go down fighting (besides, maybe I’ll get lucky?). I die, of course — as expected. I jump back a few days before I went after that spirit and instead try to spend those days preparing for the coming dragon, hoping that this time things will go in my favor. It doesn’t — I die again, for good this time, due to poor decision making in battle. 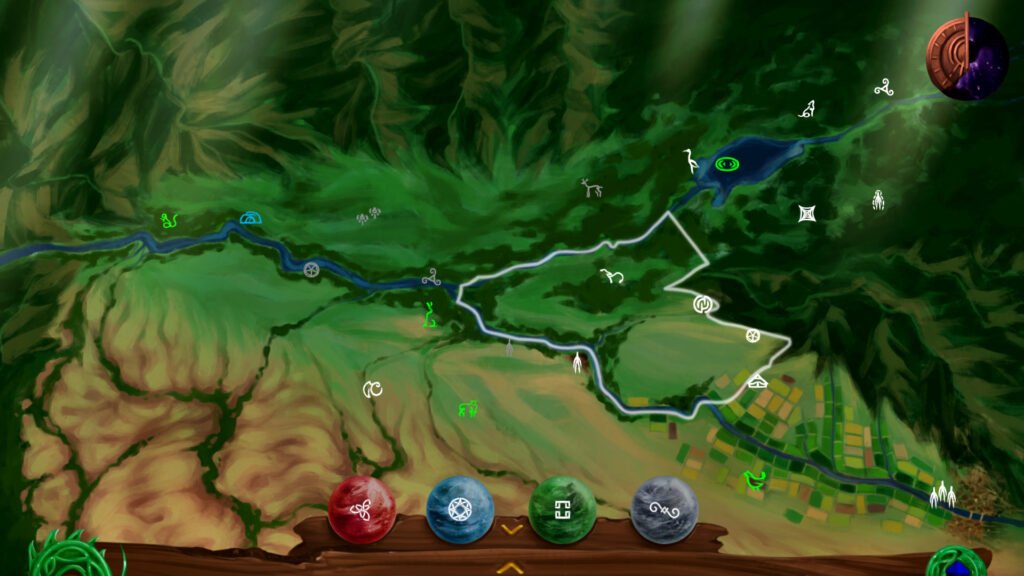 Such is the way of Golden Treasure, a role playing game from developer Dreaming Door Studios. In it, you follow the life of a dragon from birth through adulthood, learning about the world around you and ultimately trying to survive. A difficult task to be sure, but a worthwhile and rewarding one all the same.

You start each day deciding how you want to spend it. Maybe check out one of those points of interest, perhaps hunt to keep your energy up, or just rest instead. How you spend your time helps shape your attributes and reputation, which in turn influences how you interact with the world. Show empathy and you’ll gain a reputation for compassion and self-sacrifice. Resolve events via a show of strength and you’re mastery of “fire” will improve, thus making you stronger.

Your actions shape your “elements,” which in turn shape how you interact with the world. Elements act as your stats: fire dictates strength, water which aids perception, earth governs health and defense, and air controls your agility and intellect. The utility of each element changes slightly whether you’re engaged in combat or not. In combat, they dictate the strength of your attacks and what manner of abilities you have access to. In exploration and conversation, they merely decide what options you have available. Depending on how strong any one element is, you might have a guaranteed success, a 50/50 chance, or outright fail — something Golden Treasure is quick to remind you not to be afraid of.

Golden Treasure is upfront about how you’re assuredly going to fail — whether that be through failing a stat check in an event or falling in battle, you’re unlikely to succeed at everything on your first go around. Often times failure only results in lost time — like being unable to extract any treasure from a rock vein or letting prey escape your grasp while hunting — but even then you’re getting something out of it, whether that be knowledge for later or gaining a bit of mastery of one of your elements for trying.

Death will claim you eventually, however. It’s here that the game’s structure fully comes into view. Every playthrough you get three lives — which are justified in-fiction as any death or other game over state being rationalized as a dream. Lose them all and that life ends, tallying everything you accomplished. Any gains you made — artifacts collected (which can either be used to either temporarily enhance your abilities or passively grant various buffs), tarot cards earned for particular feats (that also provide a permanent bonus to one of your elements), and any knowledge you’ve gained about other creatures — are carried over.

There is, admittedly, some annoyance with playing through the same events over and over again. What’s a fun or interesting exchange on your first go turns into a bore once you’ve seen it for the fourth or fifth time, which makes having to start over on death frustrating sometimes. It helps, though, that you only end up starting back at the start of whatever act you’re on, meaning you’re never too far away from wherever you last were

Combat is bound to be what ends you most often. It’s a sort of rock paper scissors affair. You and your opponent select an attack and clash, the stronger element winning and thus dealing more damage. The kinds of attacks you use are based on the four elements. Fire beats air, water beats fire, and air beats water, while earth acts as a neutral element that you primarily use for defense. It’s simple, but effective and surprisingly tense at times. The purpose of combat is primarily to hunt so you can keep your energy up, but occasionally you’ll be drawn into fights for other reasons as the story or events you encounter dictate.

Every creature has a particular attack pattern they follow. Once you know the pattern, it’s just a matter of figuring out where in that pattern they are so you can act accordingly. To learn these patterns, you either have to memorize them or learn enough about each creature to know their “way” — that is, have a full understanding of them — by either observing, conversing to learn more about them when the chance arises, or hunting them, at which point their attack patterns are shown in your compendium.

Golden Treasure has a clear reverence for nature. There’s a constant sense of wonder throughout the writing, which certainly helps communicate the curiosity of the dragon as they learn about the world around them, but it also feels born out of an appreciation for nature at large. Its depiction of the world is a delight to explore, rife with all sorts of intrigue (there is some stuff dig into), and its inhabitants full of interesting perspectives.

While the story is primarily about your dragon and their life, it is ultimately one about the world, how we all fit into the natural order, and what that means. In particular, what does said order mean when we, humans, begin to establish ourselves and disrupt things? Much of the game involves the dragon figuring out what sort of path they wish to follow — whether that be one of might, wisdom, compassion, or something else — and how to square that with what they, as a race, are driven toward. But eventually it also comes to involve us humans and what impact we’ll make on the world.

At the start you’re told to simply find a place to claim as your domain and to collect treasure, as both are key to establishing yourself among your kin. After that it’s just… survive — live your life; explore, learn about the world around you. It’s on you to decide what to pursue and how to do it. But as time goes on and you learn more about what’s happening on the periphery, it becomes clear what the stage is being set for, how you’ll eventually come into play and what role you’ll serve.

Making it to that point isn’t easy — my playthrough took me around 12 hours, mostly due to the many times I died — but it’s definitely worthwhile. For as difficult as the game can sometimes be, its story is one worth seeing. From the little events you encounter on your day-to-day activities to the larger plot, Golden Treasure: The Great Green‘s got a lot to see and uncover. I feel like I’ve only scratched the surface, which makes me excited to see what else the game has to discover.