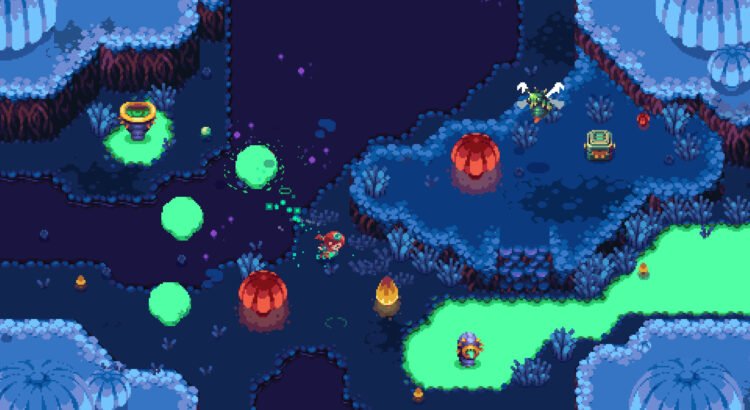 Sparklite isn’t a terribly long or difficult game — and that’s great. With how many games vie for our attention these days, something quick and simple always makes for a nice change of pace. Being able to play a game from start to finish without having to invest weeks worth of play is a godsend sometimes, and Sparklite is one of those cases.

Sparklite puts you in the shoes of Ada, a traveling inventor who finds herself wrapped up in a conflict involving the titular sparklite, a natural resource that contains a ton of power and a variety of applications. The long and short of it is, Geodia has been beset by constant earthquakes that reshuffle the lay of the land as a result of some extensive and invasive mining campaigns. Led by a man known as The Barron, he and his cronies are harvesting sparklite in mass quantities to harness its power and essentially take over the world. You know — usual villain stuff.

What makes the story interesting is its clear environmentalist angle. Fighting against a greedy, power-hungry bad guy who’s depleting the world of its natural resources and destabilizing the land all the while by shutting down mining sites and cleaning up the pollution: it’s pretty clear cut, honestly. The world’s in a bad state because of all the mining, the earthquakes acting as the planet’s defense system, essentially, each tremor reshuffling the lay of the land an attempt to keep the Barron from further wreaking the environment. The story is slight overall, development only happening every time you defeat the boss of each of the five areas, and it doesn’t exactly go anywhere bold or unexpected, but it’s enjoyable for what it is. If nothing else, shutting down mining operations is extremely satisfying.

The basic loop involves you making preparations at your base (which is a small slab of land that’s floating in the sky) before making the trek down below to collect sparklite and hopefully take down one of the bosses. Faint in battle, and you’ll be pulled back to base so you can spend sparklite to upgrade the base’s facilities as well as yourself. It sort of feels like Bastion albeit with less character moments. New gadgets, such as ranged weapons like crossbows and energy rifles, or tools like flying bombs and one that allows you to shrink down to move through pipes, can also be constructed after discovering the blueprints. You can also alter your loadout of upgrades to your attributes there, allowing you to alter them to whatever you need for any given run. Although given how quickly you can effectively gain sparklite before long, you can just increase the number of upgrade patches you can equip to the maximum and make yourself unstoppable.

Sparklite isn’t a difficult game by nature — though the early goings can be tricky due to how little you have — but you can essentially remove any sense of challenge entirely with the right set of patches. It wasn’t long before I’d buffed my defense enough to make all damage moot, every hit only taking a quarter of each heart in my health bar. That’s not to say I was effectively invincible — recklessness could still destroy me swiftly — only that I got lucky enough to earn the right upgrades to apply early on and make most of it a cakewalk. In a particularly good run, I was able to defeat two bosses. The second and third areas (an autumnal forest and a dark swamp, respectively) were able to be cleared in succession because I got lucky enough to have a large stock of healing items, which combined with my improved defense, made it so I could easily revert whatever damage I took.

Everything past that wasn’t nearly as simple. While I still could more or less mitigate damage to the point where it wasn’t a concern at all, I still had to contend with some hardy foes. In the desert zone particularly, there’s these rock golems that slam the ground with their fists sending shockwaves that hone in on you. You can dodge them, but the timing is tricky when you’re trying to smack them around with your wrench. I could sit back and fire at them from afar with any one of the gadgets I had, but their energy is limited and they weren’t quite as powerful as my wrench, so I made due with taking loads of damage instead whenever I had to fight them. The tougher foes can be fun to fight, though. I recall one very large goblin-esque fellow gave me a ton of trouble for a while.

Broadly speaking, however, that Sparklite isn’t a particularly difficult game is fine. It’s a game with a clear end-point as opposed to one that’s meant to be played in perpetuity by always making each run unique in ways you can never predict. It’s use of procedural generation make exploring the world consistently exciting since there’s always the chance of encountering something you hadn’t seen before after becoming familiar with each area’s tricks. In particular, the small puzzle rooms you can find provide a nice change of pace and make good use of your suite of weapons and gadgets. Pitch black rooms that ask you to navigate unstable ground with very few light sources, dashing between moving platforms above a bottomless pit — simple stuff, on the whole, but enjoyable all the same.

That it’s ultimately short is good as well. It’s easy for run-based games of any sort to be too long and ultimately outstay their welcome, every new run becoming more and more of a slog as every failure becomes another setback on the road to the game’s finale. At some point, I just want to see how the story wraps up and constantly being beset by roadblocks can be grating. Sparklite‘s quick progression ensures it wraps up before that happens.

Games like Sparklite are great because they’re reliable. They’re quick, simple, and ultimately nothing new or surprising, but they’re fun and satisfying. I like roguelike (or roguelite or whatever) mechanics, but the games they’re attached to can be exhausting due to their seemingly never ending nature. If there’s a proper narrative attached to them, I’m likely to stop playing once I’ve seen the end because I don’t have any real motivation to keep going. Sparklite essentially refines that into a more digestible format — something I can easily play through and enjoy without fear of becoming bored or frustrated and easily put down once I’ve seen it through. Which, given how often games feel the need to be able to consume your time in perpetuity (or are just too long in general), is always nice to see.