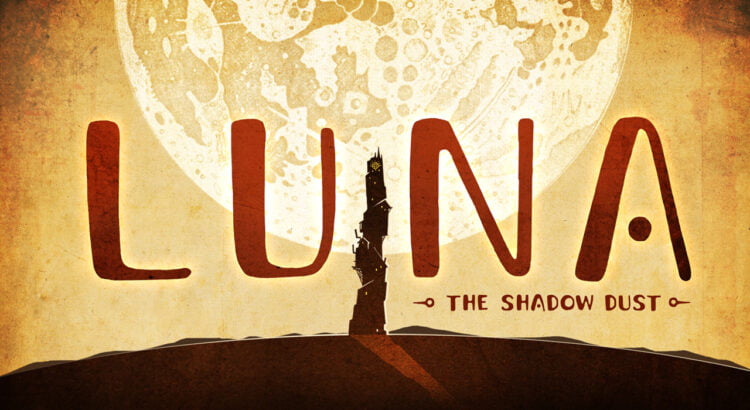 Adventure games are tough to properly categorize these days. Any one of them could fall into any number of interpretations. The classic approach of long, complex puzzles that defined the early LucasArts-era games, the Telltale Games format that eschews puzzles entirely in favor of a raw narrative focus, or some combination thereof. It makes it difficult for me to immediately jump on board with these sorts of games because it’s hard to get a good sense for what kind of adventure game I’m jumping into. Luna The Shadow Dust falls into the category I prefer: the sort that’s quick and simple, with puzzles that are fun without being frustratingly obtuse.

Luna tells the story of a young boy and a mysterious tower. It begins with the boy falling from some unknown location, a small flicker of blue flame saving him from certain doom. As he begins to climb the tower, he meets a cat-like creature and the two of them work together to reach the top, solving the many puzzles it holds along the way. The story is told entirely through visuals alone. Not a single word of text or dialog appears, the game taking on a bit more of an interpretive approach — although the broad strokes are easy to pick up on. The music does a lot of heavy lifting to help sell the emotion of each scene, but it does so splendidly.

Luna is basically a series of small puzzle rooms, as each new section of the tower is its own self-contained puzzle. It’s not like most other adventure games that let you explore its setting and poke around at your own pace, but rather the type that’s constantly pressing onward. As such, none of the more frustrating staples of point-and-click adventures are here, such as pixel-hunting or obtuse puzzle logic. Everything is quick and intuitive, each room providing just enough of a challenge to feel like you’re still solving something rather than merely performing busywork. I’m often put-off by these sorts of games because so many of them still lean on those old staples. And for as much as I often enjoy the stories adventure games tell, seldom do I want to put up with banging my head against a wall trying to work out whatever roundabout solution the puzzle in front of me requires. That Luna is so straightforward is perfect then as it prevents the game from being bogged down by any of the genre’s more vexing elements.

Though its puzzles are simple, they still manage to stump every now and then and still feel pretty clever. That “aha!” moment still occurs regularly and still feels just as satisfying. You can’t really poke around each scene, only able to interact with whatever objects are connected to the current puzzle, but even then, figuring out what exactly you need to do isn’t always obvious right off the bat. Clues are posted clearly in the space, but often blend in just enough with the scene to make them feel like simple set-dressing than blaring sign-posting, with the most obvious clues being at least somewhat hidden so as to not just giveaway the solution.

It’s just an all-around pleasant game, really. Its gorgeous art is a joy to behold, making each scene shine with how much character and detail it brings, while the relatively simple puzzles allow the game to move at a comfortable pace. I’m more interested in seeing the world and stories these sorts of games make more than I am interested in raw puzzle solving, so that Luna does so well on that front is a huge plus in my eye. If you’re in the mood for a quick and lovely little adventure game, Luna The Shadow Dust is definitely worth your time.