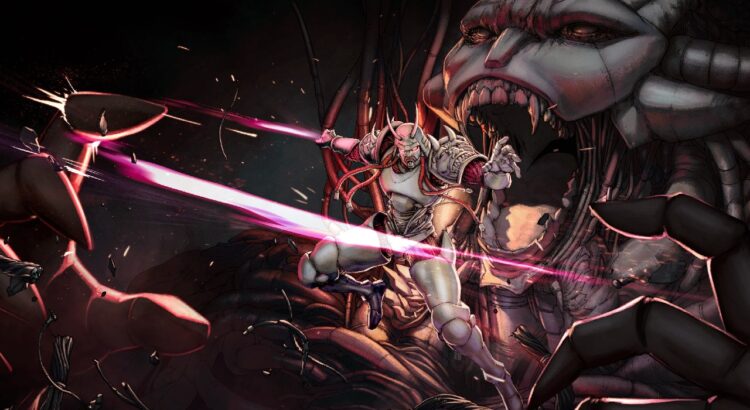 The folks at Brazilian studio Joymasher are really good at combining retro genres into great, modern gaming experiences. I could go on about just how fantastic Blazing Chrome turned out, but that would end up being a disservice to the game I’m actually reviewing right now, which is also an absolute blast.

I’m talking about Vengeful Guardian: Moonrider (what a name!) of course, a brilliant mix of some of my favorite games from the 16-bit generation. Having spent countless hours slicing my way through hordes of enemy ninja in the Sega Genesis/ Mega Drive gem that is Shinobi III: Return of the Ninja Master, I was instantly hooked on Moonrider from the very beginning, and its very Mega Man and Mega Man X trappings kept me going even more.

Vengeful Guardian: Moonrider, in a nutshell, is the culmination studio head Danilo Dias’ passion for tokusatsu, the sub-genre in Japanese superhero TV shows where a lone hero, or a group of colorful ones, take on a variety of enemies every episode, using flashy moves and lots of pyrotechnics.

In Moonrider, you play as a samurai armored warrior that could very well be the dude from Shinobi, and take on a handful of level-based bosses, all of who give you a special skill when you defeat them. In true Mega Man fashion, some of them are weaker to specific powers, and figuring out what order to take them on is only the first part of just how well the tightly put together game that is Vengeful Guardian.

Perhaps it would be a bit more precise pinning the Mega Man X variety of games to this one, considering all of the jetskiing and level-shifting that goes on from stage to stage, and the overall more serious, metal tone of the whole thing. Regardless, fans of that kind of platforming will be instantly in love with this one.

There’s also plenty of incentives to combing the game through and through, as there are special collectibles to find in each stage that give you a few useful skills and buffs. The best part is that you can always jump back to every single location from the game even after completing them, so if you can’t seem to locate a specific item, you can always just finish the level and come back later. It’s particularly something I’ve always missed in the Mega Man games.

Other tiny details help cement just how cool Vengeful Guardian: Moonrider is overall. The absolutely gorgeous sprite work, a signature feature in Joysmasher’s games is very present this time around, featuring some of the coolest idling animations around, not to mention background elements that are easy to miss when dashing about, but that help complement the feel of the game in motion.

I enjoyed the move set a whole bunch too. Including Shinobi’s down thrust air kick and running sword slash was a genius move, and they’re both put to great use thanks to the balanced enemy design. And I’m not simply throwing the word around for free: Moonrider is perhaps Joysmasher’s most balanced game, and the one I had I wouldn’t say the easiest time finishing, but it’s the one I hardly felt limited by the character I was playing as or due to my own personal skill.

Vengeful Guardian: Moonrider certainly isn’t the most unique or downright original game that ever was. But it’s just so well conceived and fun to play that it would be a crime for you not to give it a go. It’s readily available on just about every single modern platform, so I would urge you to give it a shot. It’s also not terribly long – if you know what you’re doing, you can finish it in a couple of hours leisurely, so it’s a fantastic pick up and play in short bursts. I had my eye on this game ever since it was announced and I’m overjoyed it turned out so well.