Another year has come and gone, and good riddance. For some reason, 2014 spawned a lot of awfulness around the world. For videogames specifically, it saw the organization of Gamergate, which has given a banner for all the worst parts of game culture and generally all-around terrible people to gather under. It’s made the past several months of this year nothing short of abysmal for videogames, the people who make them, write about them, and enjoy them. It’s made me ashamed to be a part of the videogame community.

I don’t think I’ve wanted a year to end as much as 2014. For all the good that came out of it, for all the great memories I accumulated, it’s hard to focus on the highs when the lows were so… low. I’d like to say I’m hopeful 2015 will be better (and I really do hope it will be better), but, man… I don’t know anymore.

Sorry to kick off this post on such a downer note. Had to air those grievances. Here’s some games I enjoyed this past year.

Wanted to highlight more than just ten games this time, so I decided to throw some random honors out there for the hell of it. Well, it was mostly because Gareth and Eduardo did that with their lists, and I figured I should do the same for the sake of consistency. So… yeah. Anyway:

Old Game of the Year: Spelunky
Patrick Klepek (formerly of Giant Bomb, now of Kotaku) is to thank for getting me deep into Spelunky this year. I played it briefly last year after buying it, just enough to “get” the appeal, but not enough to keep me interested in the long term. Patrick’s daily Spelunky streams earlier this year changed that. Watching someone learn the game from scratch and go all the way to finishing off Yama (the game’s true final boss) was incentive enough to get me to jump back in and really dig into the game. For a while there, it was a daily ritual to play the daily challenges – especially when the game launched on PS4. Almost considered streaming it out, too. Should try following through on that this year…

Best Local Multiplayer Games: Nidhogg, Crawl, Lethal League, Cannon Brawl
It’s been an exceptionally good year for local multiplayer, such that it’s difficult to choose just one game to honor. Hell, the four I have listed doesn’t feel like enough. There were so many more that I wish I’d gotten more or any time with (Gang Beasts in particular). Of all the recent trends in videogames right now, the resurgence of local multiplayer is by far my favorite. I only wish they’d all stop coming out almost exclusively on PC so it wouldn’t be such a hassle to set up matches.

Best Soundtrack: Transistor
Though the lyrical tracks are always what immediately spring to mind whenever I think about the music of Transistor (they’re really, really good), the ambient background tracks all played a huge role in establishing the tone and atmosphere of Cloudbank. The electronic style of its soundtrack meshes perfectly with the computational elements of Transistor’s world, every track seemingly adjusting in perfect synchrony to the action on-screen.

The best example I can think of is during the first boss battle, wherein the accompanying song, “In Circles,” slowly becomes more corrupted as the battle progresses, mimicking the steady degradation of your opponent. It illustrates the horrific nature of The Process, how it warps the mind and body. It’s one of the first moments where the gameplay and music intertwine in spectacular fashion, and it only gets better from there.

Games I wish I had gotten around to playing/played more of: Elegy For A Dead World, Eidolon, Super Time Force, Secrets of Raetikon, D4, 80 Days, Threes, Never Alone, and a ton of others whose names I’m forgetting.

And now, the ol’ top ten list, as is tradition:

10. The Banner Saga
There were many moments in The Banner Saga where I spent upwards of ten minutes contemplating the choices laid before me. Usually I don’t have to think about them; I already know what I’m going to choose, because usually choices are presented as binary options: good or evil, kind or abrasive, merciful or ruthless. I would always choose whatever the “good” one was, as that’s always how I play games. In The Banner Saga, however, nothing is so clearly black and white.

Every choice was a challenge. The Banner Saga makes it clear early on that the well-being of the caravan, the lives of your troops, lie in the balance during these decisions. They don’t ever die in battle, instead they fall due to your choices outside of combat. Like life itself, some things are simply beyond your control.

It’s a tough lesson, one I learned quickly upon making one slightly wrong choice which led to the death of one of my comrades before we’d even gotten on the road. All because I made the wrong call. And then, when we were finally about to set off, I made another wrong choice which led to even more deaths, due largely in part to falling in battle. In any other game, I might have just jumped to an old save and tried again so I could be off to a stronger start. But in a game of consequence and hardship like this one, I took it as a reminder to do better. Giving up by reloading an old save would be letting the game win.

9. Entwined
I always find myself falling into a funk of sorts following E3. Much as I’m always glad to be home after such a long, tiring week, glad not to have to think about that madhouse of a show for another year, it always leaves me depressed once it’s over. I think it’s because I know I won’t be seeing some good friends for another year. E3’s about the only time Eduardo and I get to hang out, even though it’s under the guise of work. It’s a big part of what makes attending E3 worthwhile for me.

Entwined helped stave off the ol’ post-E3 depression. It gave me something to occupy myself with so I wouldn’t immediately fall into depression upon returning home. It was there when I needed a distraction. Also helped that it was a generally great game as well, of course.

8. Hohokum
Hohokum was a game that arrived at the right time and place. Things got real nasty over the summer, and being constantly exposed to all the awfulness going on in the world took its toll. I picked up Hohokum on a whim and found a perfect remedy within. It’s bright and colorful worlds and its upbeat attitude were uplifting and soothing. I had no idea what I was supposed to be doing or what was going on, but I didn’t care. Just flying around aimlessly was enough. I didn’t need structure or goals – I was content just taking it easy and enjoying the sights.

7. Dark Souls 2
Dark Souls overtook my life when I started playing it two years ago. It almost became an unhealthy obsession: when I wasn’t playing Dark Souls, I was either reading about it or watching videos about it every chance I got. Dark Souls 2 didn’t inspire that same obsessive nature (thankfully), but it was nevertheless a great sequel. It captures the core concepts that made its predecessor so engaging while putting its own slight spin on things, resulting in a better playing game, but perhaps one that leans a little too heavily on being more Dark Souls and nothing more. Not that I’m complaining – that’s basically all I wanted. And it delivered.

6. NaissanceE
NaissanceE is a game filled with memorable moments. I think back to when I emerged from a series of abstract hallways into a massive room lined with buildings stretching far above and below me. I think back to the music performance I stumbled upon while in a desert. I think back to all the times I would just stop and look around, awestruck by the majesty of this strange world. Or how often I felt afraid and unnerved while wandering about, despite rarely being in any real danger. NaissanceE’s ability to communicate so much, to elicit emotion purely through its architecture, endlessly fascinates me.

5. Fract OSC
Any game that incorporates music into its design in creative fashion is enough to get me interested. In Fract OSC, you’re dropped into a literal world of music – where puzzles are solved by playing with sequencers and adjusting tempo, where you essentially create the soundtrack as you go. It’s hardly a new idea, but the way Fract executes on it is nothing short of brilliant. 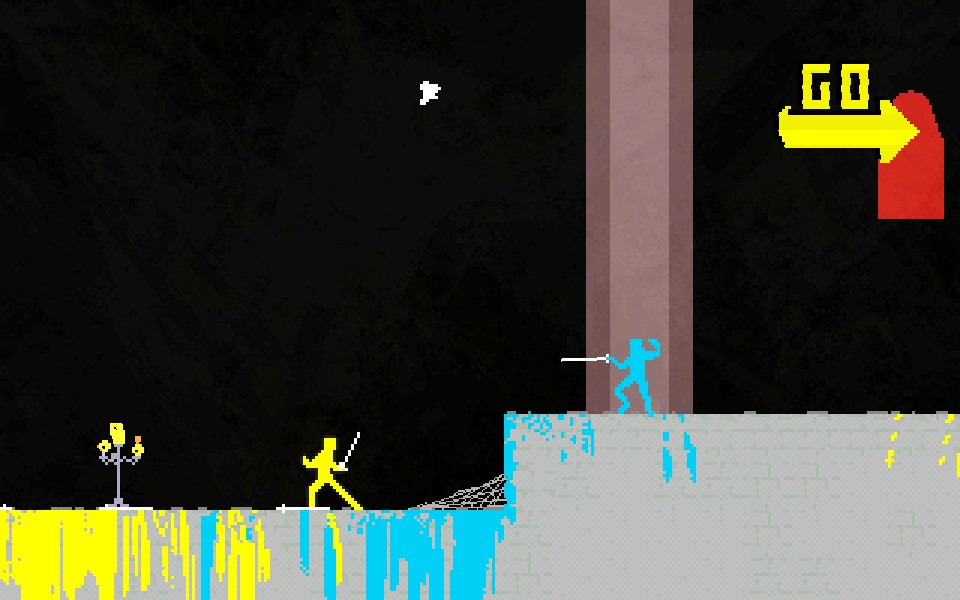 4. Nidhogg
Look, I know I said it’s tough to choose just one local multiplayer game, but it’s Nidhogg. It’s one of the purest distillations of one-on-one fighting games around, containing all the thrills and depth you’d expect while also keeping things deceptively simple. It’s highly strategic, but also incredibly accessible, such that anyone can instantly pick-up and play in seconds. Of all the multiplayer games I played this year, Nidhogg’s the one I enjoyed the most.

3. Transistor
Supergiant Games has a way of inserting absurd amounts of depth into the mechanics of their games. Bastion did so with its array of weapon combinations and how they play off each other, such that everyone who played it all had different preferences on what weapons they used and how they upgraded them. Transistor is very much the same, but instead of encouraging you to find an optimal combo of weapons and upgrades, it emphasizes experimentation.

Every time I found an access point, I swapped out or reconfigured Functions to try something new. Not because I couldn’t decide on a good set, but because I wanted to keep experimenting with them, see how they evolved when paired with each other or how they acted when relegated to support status. And every time, I discovered a new strategy or technique, or found ways to strengthen my preferred set of functions. It’s a game that never ceases to deliver surprises.

Also, that soundtrack: so good.

I urge you check it out yourself, as it’s a charming, wonderful little game that takes maybe an hour at most playthrough. But suffice it to say it does more with its small slice than most games manage with reams of lore and hundreds of hours of gameplay. It’s imaginative and lovely, even a little poignant and a total riot. It was a refreshing end to such a hard year.

1. Kentucky Route Zero: Act 3
It’s difficult to put into words what makes Kentucky Route Zero so special. I’ve been sitting here for a couple of weeks now trying to think of a way to articulate my thoughts on it as I work on the rest of this list, but I’ve been unsuccessful, always deleting what I’ve written just as quickly as I draft it. I hear people say it’s “Lynchian” or “surreal” or “magical realist” or – you get the picture. Short-hand that doesn’t really capture the core of what makes Kentucky Route Zero what it is, that barely even begins to convey its genius. It’s a game that I feel I don’t have the mental capacity to truly explain. It’s something you have to experience for yourself to understand.

Carolyn Petit summed it up best: “Kentucky Route Zero is a game I can’t get out of my heart. I don’t know what it all means, but I know that it is speaking to me.”