What better way is there to play an RPG than having a friend along for the ride? Let me tell you, after watching Divinity Original Sin: Enhanced Edition‘s demo at E3 this year, I can’t think of any. Divinity‘s space at the show was a show on itself, as I got to sit for a demo inside a pretty comfy tent setup, along with a couple of enthused reporters and Larian Studios’ own Farhang Namdar and Swen Vincke at the helm.

Original Sin, for those unfamiliar with it, was a pretty big hit on PC a year or so ago and won many accolades as an incredibly well made isometric party-based RPG. Divinity was already a known franchise at that time, but that game in particular took it to a whole new level of popularity, both among players and critics, a tough combination, especially for a game of its ilk, strongly rooted on role playing principles and rules, but at the same time, featuring lots of humor and incredibly clever writing.

The new Enhanced Edition aims to bring all the good stuff from the PC release over to consoles, as well as remodel its gameplay to controllers. That’s not all, though, as the demo proved, cooperative play is also getting worked into the game. The part that most impressed me during the demo, though, wasn’t simply the idea of having someone along to play (that much was a given), but how it’s implemented. Much of the interface has been given a look over in order to accommodate having an extra person playing.

That was so much so that during my time watching, they became separated, and that was when the screen was dynamically split in two, which allowed both sides to keep playing. That happened both when they moved away from each other, to give us watching a “waaaah” effect, but also during the story progression. It happened during a quest that required them to infiltrate a compound. One of the options that they came up with involved one of the players getting snatched, and the other coming to their rescue as a third party. It all came together extremely well, as it’s expected of an E3 demo, but still, if the final game is as polished as this section and leaves room for on the moment silly co-op antics, Enhanced Edition might just be the go to game for me in a pinch. 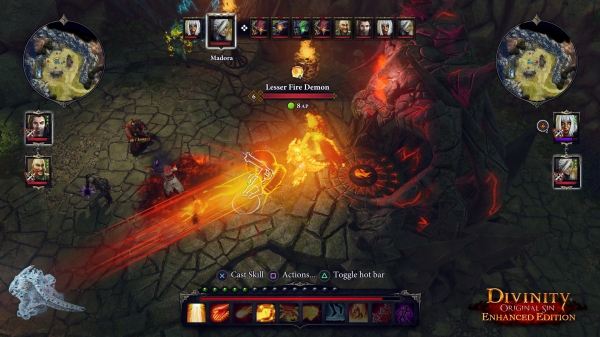 According to Namdar, there’s also a lot of new content being added to the game as well, like new combat styles, quests and items, so returning players should find reason to jump back and re-roll new characters. Another interesting bit of info was that all the new additions will be included as a free update to the existing version of the game on PC.

It’ll be exciting to get into this game again, because honestly enough I’ve grown quite tired of relying on mouse and keyboard for PC games. Seeing how well the controls have made the jump to a gamepad and the reception to the original’s release, I’m much looking forward to getting acquainted to Divinity: Original Sin Enhanced Edition once it’s out later this year.