Though Devolver’s never been at E3 proper, their own showcase across the street from the convention center always hosts a wide variety of games, ones that often provide a nice change of pace from the usual crop you find on the show floor. Here’s some of the highlights we saw from Devolver themselves.

Absolver
Absolver was by far one of the biggest surprises of last year’s E3. A martial arts fighting/adventure game, Absolver drops you into a sprawling, interconnected world where you can randomly run into other players at any time (a la Journey). I’ve been eager to get my hands on it again ever since, and this year’s demo didn’t disappoint.

This year’s demo focused more on the co-op and PvP aspects. I was quickly given a rundown about how the game works – how to build your own combos, how stance modifies attacks, etc. The gist is that, as you fight other players or enemies, every time a new move is used against you, you steadily learn that attack yourself. New attacks can then be bought using skill points earned from leveling up. Through this, I was able to change my standard three-punch combo to end with a low-kick to help knock my opponent off guard. Despite how simple the actual mechanics of battle are in practice, it feels like there’s a lot of complexity at work.

After the quick tutorial, we start a duel. We fought one another using a drunken style of fighting instead of the standard arts we finished customizing a bit earlier. Instead of quick, immediate punches and kicks, our strikes had a slight lead-up before being executed. It took a while to get used to. One advantage the drunken style had, however, at least the character class I chose, was the extra follow-up attack when dodging.

There were three base classes to choose from, each largely deciding your base stats and equipment rather than play-style. There was a light archetype that had a side-step move mapped to the right stick (the one I chose), a medium class that could parry, and a heavier sort of tank-like role whose ability I didn’t get a look at. While their particular skills are useful, they didn’t strike me as something that would dictate your play-style. They seem more like small bonuses to help augment your preferred approach. I tend to favor speed over raw strength, for instance, so having an additional dodge at my disposal seems like the kind of thing that would help give me the edge I’d need over someone who plays more aggressively.

At least, that’s how it’s supposed to work in theory. As I fought against one of the developers, they obviously had the upper hand throughout the fight given they knew what they were doing as opposed to me, a total amateur. Every time I tried to make good use of that side-step, they’d just block or counter me. I didn’t get much hits in at all, actually, but I’ve never been great at competitive games, so that’s about what I expected would happen.

Absolver is out on August 29 for PlayStation 4 and PC. 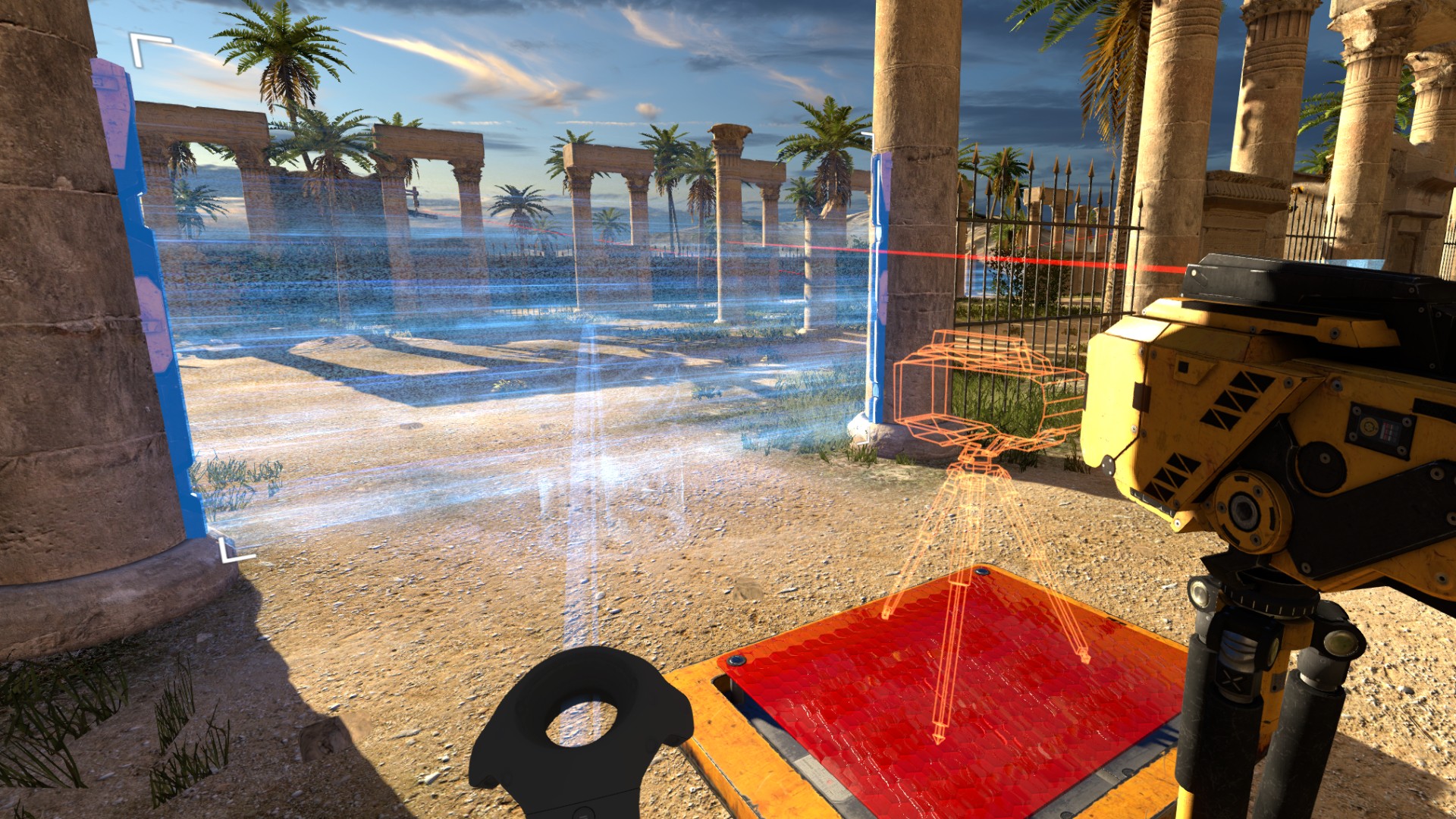 The Talos Principle VR
Having spent a considerable amount of time playing the original release of The Talos Principle and its DLC, Road to Gehenna, I felt quite confident in giving the game a go on VR, as we met up with the fine folks from Croteam at Devolver’s lot. I was looking forward to seeing what else they had come up with after having quite a bit of silly fun last year testing out Serious Sam VR.

The VR demo took me to a familiar field from the main portion of the game, and offered three puzzle rooms for me to try and solve, varying in difficulty. I took things slow, since I was still getting used to playing the game using a Vive headset: so much so that I had to spend a few moments deciding which sort of movement option I wanted to use. I ended up sticking with the smooth one since the point-to-point option felt slightly uncomfortable to me.

From a gameplay perspective, The Talos Principle plays in VR like it would on a normal flat screen display. The added benefit of being able to look around freely certainly adds to the immersion, but it doesn’t really give you much of an advantage when trying to come up with solutions to the puzzles. It’s a neat way to play this for sure, and given how it’s also a game built with environmental exploration in mind, it has the potential to be pretty big with headset owners once it’s out.

According to the developers, few of the players that have tested the game in VR so far have spent a lot of time playing using the smooth movement option like I did, and I can easily attest as to why. After taking off the headset, I had to sit down and take a few moments to rest. I had spent over twenty minutes making considerable progress beating the first two rooms. I started feeling a little weird thanks to the disconnect with controller movement commands and actual physical locomotion, an issue that’s been inherent to first-person experiences in VR to me personally; also ran into while testing other FPS VR games, like Sony’s Farpoint, at this year’s show.

The Talos Principle VR doesn’t have a confirmed release date yet. 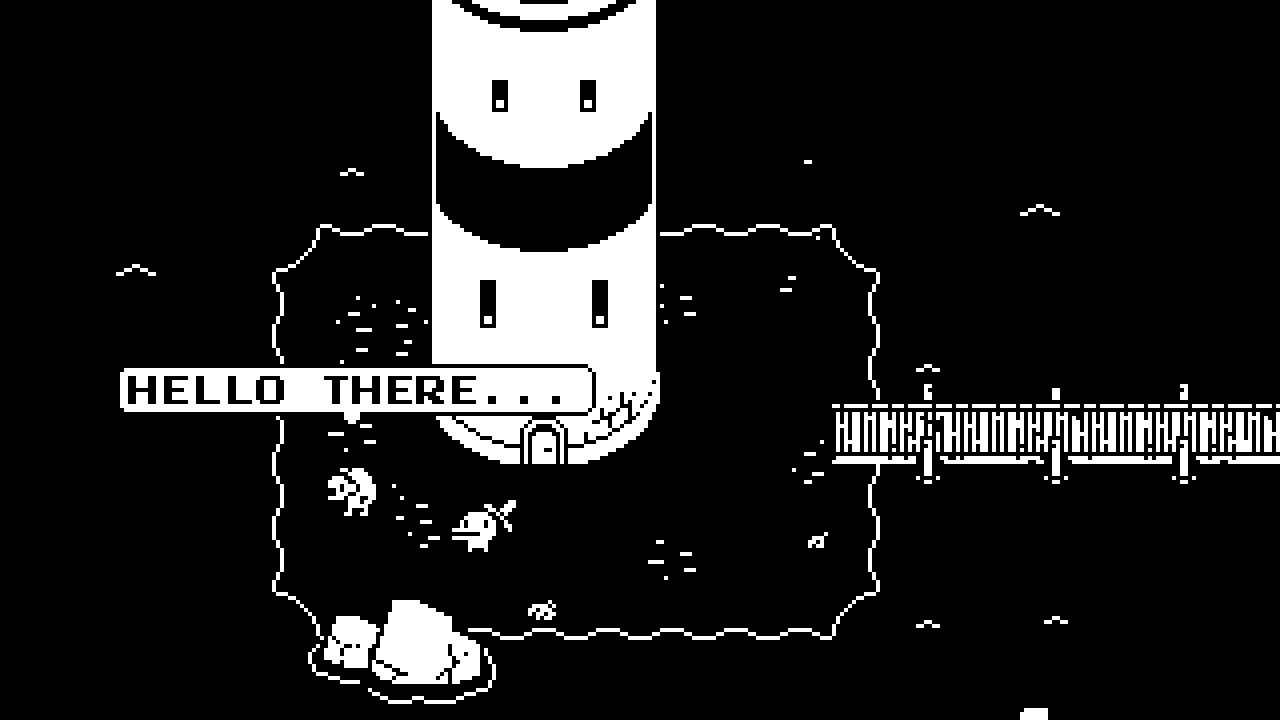 Minit
Minit is a series of 60-second adventures. Think Half-Minute Hero, but instead of extending your time limit to achieve your goals, you literally only get 60 seconds per life. Then it’s back to where you last rested before setting off into the world once more. The game begins on an average day, the protagonist going about their day like they would any other. Then they find a sword on the beach that, upon picking it up, quickly starts draining the life out of them, reducing their life into a series of 60 second vignettes.

My first life didn’t go so well. I started by running west to try and get a look at the rest of the immediate area. Eventually came upon an old man standing outside a lighthouse. He had some sort of info to impart, but his speech was so slow, I was already almost out of time well before he finished what he was saying. Died not long after.

My next couple runs were more focused on gathering information. The local café owner wanted someone to exterminate some pests roaming around outside. I quickly ran around and took them out, returning to the café with just enough time to spare to earn my reward: a cup of coffee. With it, I was able to push rocks, allowing me access to a few more areas. That led me to finding the key to the lighthouse, which then led me to another item that granted another ability and… you get the picture.

That’s the basic gameplay loop. Search for an objective, complete it, get new item, proceed to new area, and repeat. Every section in the game has at least one secret to uncover, according to the developers. There were tons just in the demo alone, a good number of which myself nor my colleagues were able to find. It’s a game well-suited to groups. Passing off the controller between myself, Eduardo, and Doug (our boss), seeing what we all tried, and offering suggestions, was one of the most fun parts of the demo. Seems like the best way to play Minit, if you’re at all in a position to do so.

Minit will be out sometime this year on PC.