Extinction is one of those games that should, on paper, work. All the elements are there, and, for a while, it’s great. A bit rough around the edges, but hey — nothing’s perfect, right? Extinction, unfortunately, is ultimately undone by those rough edges. What begins as a solid action game with a good premise soon devolves into a frustrating series of missteps that make it a struggle to enjoy at best and an utter chore at worst.

Extinction follows Avil, one of the last members of an ancient order known as the Sentinels, who devote themselves to fighting the ravenii, a race of giant ogres that seek mankind’s destruction. Extinction picks up at the start of the ravenii’s latest attack, this time an all-out assault to wipe humanity out entirely. The story is told through quick conversations at the start and end of each mission, with the occasional animated cutscene delivering some backstory.

The action is largely defined as a diversionary tactic while Avil’s partner Xandra constructs a portal to whisk everyone away somewhere beyond the ravenii’s grasp. As such, your job isn’t to just slay anything in your path, but to save as many people as possible and fight off as many ravenii as you can until either time runs out or you’ve met whatever quota for kills or rescues the mission asks of you. It’s a simple rhythm — save civilians, fend off monsters, slay ravenii, repeat — and it works well for the most part.

Fighting ravenii is a multi-stage process. First you need to build enough energy for your sword to decapitate them, which is achieved by slaying jackals (lesser ravenii, basically), rescuing civilians, and destroying ravenii armor and slicing off their limbs. Then, once full, you need to scale their backs to get in position at the base of their neck to cut their heads off. Apart from the occasional annoyance of having to build energy (time-sensitive objectives are a pain to deal with when you have to spend so much time charging your sword), slaying these towering ogres is satisfying. 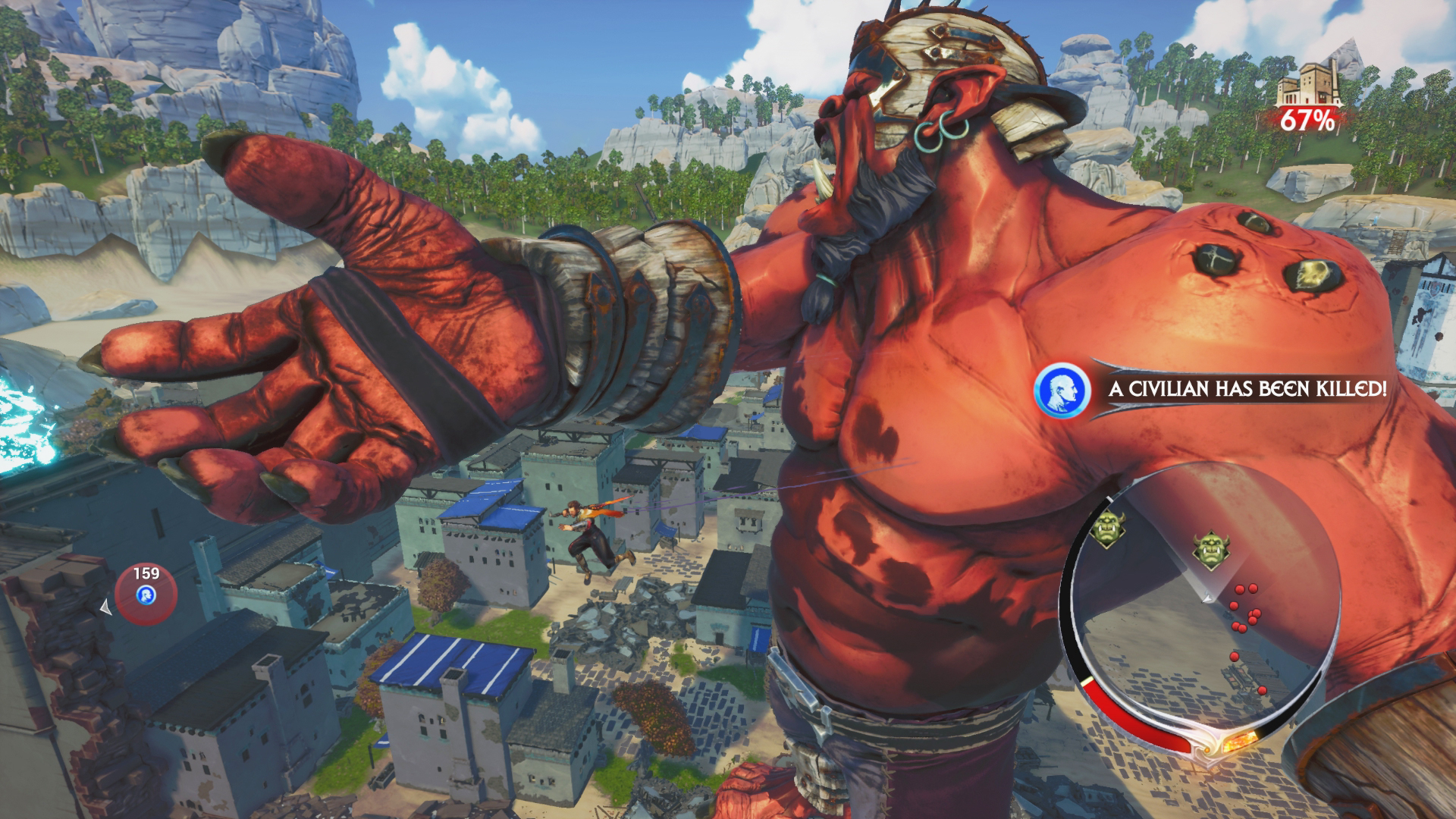 Each of the story’s missions assigns you a primary objective — usually something like “kill X number of ravenii” or “save Y number of civilians” — and a few side objectives, which grant additional skill points to spend on upgrades if completed. They start off easy enough to fulfill, but as the game ups the challenge in later missions, they soon become an afterthought due to how difficult they are to achieve.

Not because the objectives themselves are unfair, mind you, but because it only becomes harder and harder to multitask over time. Extinction is a stressful game. With smaller foes constantly seeking out civilians while the ravenii steadily stomp through settlements, the constant juggling of objectives becomes nigh impossible. Every battlefield is huge. For all the ways Avil can move about swiftly, it does little to help you fight on multiple fronts. Fighting off jackals to save one group of civilians often means neglecting another. You can eventually activate the portals fast enough to bypass having to fight any monsters off before sending people to safety, but even then, it only slightly alleviates the problem.

You can’t save everyone, and the game makes sure you know it. No matter how strong you become, it never changes the fact that you’re fighting a losing battle, that you’re constantly just barely holding on. Prioritizing civilians allows the ravenii to raze cities with ease, just as focusing on ravenii means sacrificing some civilians. You can try and minimize casualties and damage, but it’s never going to be enough. The story makes it clear fighting off the ravenii is a hopeless endeavor, and the game spares no expense in making that absolutely clear.

This all would be more effective if the game weren’t so rough around the edges, though. Extinction‘s problems arise as it introduces more powerful foes. As more and more ravenii start to spawn at once, sporting stronger and more complex armor, the action becomes increasingly frustrating. Getting Avil to scale ravenii is already a chore, but once you have to deal with armor that can only be destroyed after it’s been weakened by their own attacks or vulnerable after certain strikes, the entire combat loop becomes a slog. Baiting ravenii into attacking is ridiculously difficult. In theory they’re supposed to strike once you’re in their view, but often they end up continuing to stomp through buildings and killing civilians instead, ignoring you entirely until they randomly decide to take notice. Worse, once they do take notice, they’re likely to use attacks that don’t register as the types that make their armor vulnerable, forcing you to wait around even longer.

On most targets, this isn’t an issue. If anything, their lack of attention helps make it easy to break armor and slice off limbs. With how fragile Avil is, anything that makes slaying the giants easier is welcome. But that’s only an advantage when you aren’t being forced to wait around for them to perform specific actions. Watching the city be leveled as messages about dead civilians pop one after another while you struggle to get your target to cooperate is infuriating.

Movement is also a problem. Though Avil is able to perform all sorts of acrobatics to make traversal quick and flashy, such as running up walls and grappling onto tree branches or posts, the execution is clumsy. Avil is supposed to scale walls automatically by leaping toward them, but in reality, he only makes it a little ways up before he either suddenly stops or jumps away instead. Getting him to consistently climb anything — ravenii especially — is more difficult than it should be. His grappling hook alleviates some of the problems, but it too can be finicky at times due to the inconsistency of when the reticle decides to appear.

It’s unfortunate because there are moments where the movement shines. After completing a few chapters of the story, you unlock a series of trials that see you rescuing civilians in the fastest time possible. These obstacle courses show a glimpse of Extinction‘s parkour at its best. Where traversal can be troublesome usually, here it’s a bit more fluid because the level design flows well. The procedural generated levels of the main game may serve it well in its endless and daily challenge modes (the former serving the game quite well, actually), but for the story, it hinders traversal since you can’t effectively make use of Avil’s abilities like you can during these trials.

Those glimmers of greatness are what ultimately define Extinction. For everything it does well, there are just as many flaws that hold it back. It starts off on a promising note, but between its attempts to add complexity and the numerous rough edges Extinction ends up buckling under its own weight.