Starting with its Direct presentation for this year’s show, Nintendo’s 2018 E3 was quite shy and irritatingly silent about much needed information about previously announced games and services, like Metroid Prime 4 and the Switch’s online subscription service, which is supposed to go live only a couple of months from now.

The laser focus on the new Smash Bros game for the Switch, now titled Super Smash Bros Ultimate proved to be too much, with most of that video being dedicated with detailing every single character included in what seems to be an Ultimate Mortal Kombat-esque version of Super Smash Bros Wii U. Outside of a few quick mentions of Switch ports of older indie (admittedly fantastic) games like Hollow Knight, a lighting quick trailer for Project Octopath Traveler, and an announcement for Xenoblade Chronicles 2 DLC, there wasn’t anything else particularly exciting or new shown by Big N, outside of confirmation that Dragon Ball FighterZ on the Switch is looking pretty darn good and that indie games are still into retro visuals and gameplay if Killer Queen Black is any indication.

Yeah, Fortnite’s coming to the Switch had been leaked weeks ago, and frankly, that’s already playable on a cell phone, it’s not a stretch seeing it on the Switch, although the news that came out of E3 about there being cross-play between the Xbox One and Switch versions of the game were a considerable surprise. I was even hoping that the newly announced Super Mario Party would’ve been playable on the show floor, given how it uses more than one Switch in interesting ways, but no luck in regards to that.

I’ve been hoping for something new from Nintendo that didn’t amount to yet another Fire Emblem title, and man, sure, having yet another turn-based strategy game in that series is great news, but I what I wouldn’t given for a return to Advance Wars or something else entirely. Don’t get me wrong, I love Fire Emblem and the new game looks fine and all, but it feels like Nintendo’s overly relying on that golden goose way too much lately, as an answer to just about anything when it comes to their consoles, be it the 3DS or the Switch. Give it time to breathe, guys. Have fans clamor for more. We just got Fire Emblem Heroes a little while ago. Oh well, I digress…

As for our time covering E3 and visiting Nintendo, our one-hour appointment took us to Nintendo’s booth, that like the rest of this year’s show floor, felt exceedingly spacious, with plenty of extra room for the public to line up in. Like it’s been for the last couple of E3s, Nintendo’s press corner offered pretty much all of the demos available at their booth in a single console setup. The demo kiosk Callum and I got to try out had Overcooked 2, Starlink: Battle for Atlas, Mario Tennis: Aces, FIFA 2019 and the new Pokemón: Let’s Go, Pikachu/Eevee for us to check out alongside Super Smash Bros Ultimate.

We started with Super Smash Bros Ultimate, and as expected, it was quite fun, but felt and played a lot like the last version on the Wii U. The only real difference to this new version was the obvious inclusion of Ridley, who was playable at the show. I would’ve expected him to play very differently from the rest of the cast, given his impressive size on previous appearances as a non-playable character, but it seems like he was paired down in order to keep things fair. I’m nowhere near of what could be called a decent Smash player, so my fight with Callum didn’t really go all that well, nor was I able to really take advantage of Ridley’s skill in battle. Outside of the new character and the novelty of playing the game using the Switch’s Pro Controller instead of the Wii U’s own, I couldn’t honestly tell if there’s anything truly unique to this game when it came to gameplay. Super Smash Bros Ultimate is set for a December release.

Next, we dove into Mario Tennis Aces, the now recently released newest entry to Camelot’s popular sports series. Admittedly, I’ve missed a few of their releases since loving the absolute hell out of Mario Tennis on the Nintendo 64, so it’s been a little while since I’ve stepped into the clay courts as one of Mushroom Kingdom’s champions. The show floor demo featured what I’ll assume is the initial lineup of characters to choose from. Given that I’ve always been very partial to smaller, more technical characters in this type of game, like Shy Guy in the 64 version, I went with Spike, the green dude from Super Mario Bros 3. 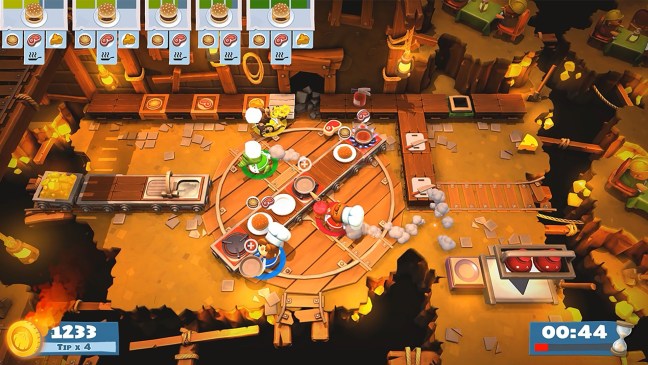 The game felt very familiar to me, and my reflexes quickly came back to me right away. Aces’ controls were tight and incredibly responsive, and to my surprise, I really enjoyed the comeback mechanic where my player could hop from one side of the court to the next in order to save what otherwise would be impossible shots. Hopefully I’ll have more to say about the retail version of Mario Tennis Aces soon, so please be on the lookout for that.

After getting the trademark variety of Nintendo games out of the way, we went with Overcooked 2, probably the most chaotic and fun game out of the handful of demos available. Having missed the original game entirely, it took me a few moments to get acquainted with how everything works, but man was that demo fun. I can’t speak about what’s exactly is new in comparison to the original game, safe to say that it plays extremely well on the Switch. I can certainly imagine taking this on the go and having a great time playing it with friends, serving dishes and trying to keep the chaos in the kitchen to a minimum. Loved it! And it’s coming out very soon, early August, so chances are good we’ll have more detailed coverage around that time.

We quickly checked out two other titles out of the demo list. Starlink: Battle for Atlas is the previously touched on Ubisoft starship game that makes use of toy-to-life accessories that lock into the Switch’s controller and can be customized by rearranging parts and switching out components at will. The Switch version’s main draw will be the exclusive inclusion of Star Fox in this particular version of the game. Unfortunately, the demo space where we played did not have any of the toys in display, but that was not the case at Ubisoft’s booth at E3, and to all accounts, the toys are of decent build quality. As for the game itself, it’s a fun little shooter with some exploration mechanics and cute graphics, and it looked much more cartoony than what I saw at last year’s E3. I’m curious to see more of it, so it’s a good thing that it’s coming out soon. That’s October 16th.

Pokémon: Let’s Go, Pikachu/Eevee was the last demo we gave a go, and for that we got to make use of the new pokéball peripheral for the Switch. The form factor of that admittedly very well built and solid feeling accessory is perhaps the game’s biggest strength, because honestly, there’s not a whole lot going on besides the same gameplay gimmick found in the mobile version of Pokémon, Pokémon Go. By motioning a throw, you’re able to try and catch the pesky little buggers, and if you get it right, you’re able to hear their cry through the speakers within the tiny ball controller.

We were also able to engage in a couple of trainer battles, and to all intents and purposes, they played incredibly simple, like the sorts of fights you’d get into at the very early portions of a main Pokémon game. Presentation-wise, Let’s Go looked like a souped up version of the 3DS versions of the main series titles, with sharper character models and a similarly saturated color palette. I’m sure Pokémon fans will adore the improved visuals to the game, as well as being able to play something related to the franchise on the Switch while the actual “big boy” adventure is still in the oven, but I hope there’s more to it than just capturing and very light fighting when both versions of Pokémon Let’s Go are out in November, otherwise the novelty will wear off quickly.

All in all, Nintendo’s E3 felt really shy and not even more to being as exciting as previous years have been to stop by their booth. I wanted to give them the benefit of doubt after their rather unexciting video presentation prior to the show opening, but it unfortunately proved to be the extent of what they had to show at that time. I’m hoping that Nintendo will have a strong Direct presentation soon in order to shed some light on the things that they left out of E3, most notably its upcoming paid online service on the Switch, but news on previously announced and omitted games from the show would have been a welcome sight.

Terror Squid makes you your own worst enemy https://entertainium.co/2020/10/22/terror-squid-makes-you-your-own-worst-enemy/

"It’s hard to recall the last time I honestly laughed and was so emotionally invested in a game as I did with this Horace." #Horace #Switch @505_Games https://entertainium.co/2020/10/21/horace-review/

"Windbound is fine for a short pleasure cruise, but you’re unlikely to want to complete the full voyage." #Windbound #PS4 #review https://entertainium.co/2020/10/10/review-windbound/