It is easy to understand why the team behind The Messenger was so reluctant to show the 8-bit/16-bit environment mechanics in the trailers. It’s a very well executed twist: you travel through time and this is represented by an aesthetic evolution between two gaming generations. That’s not exactly a new idea — 2007’s Super Paper Mario handled the cross between 2D and 3D in a similar way — except that in The Messenger, this idea is not used as a conversation between two generations trends and design standards, but just as an easily understandable clairvoyance.

Unlike Super Paper Mario, in The Messenger the changes between the two generations is an inspiration kernel, not only in the art style or the soundtrack, but in structure. At first, the game flows as a sequence of linear stages, where the main character receives a new power occasionally, like platforming games of NES era. After the twist, it turns into a metroidvania, and from that point on, the true size of the world — and therefore, the size of the game — shows itself. You’re then able to travel back to through previous stages and explore them further by using the abilities gathered during the 8-bit phase.

At first glance, this looks like just a new way to introduce the player to a metroidvania world in a safer way before giving the power to explore, clearly inspired by the behaviorism trends of games from nowadays. And it really is. It isn’t merely “just” a clever mechanic. Metroidvania is a 20+ year old genre, and it’s great to see a development team being so synergistic with the concepts of the genre their game is in and achieve so much from a design perspective. That certainly shows in the way the evolution of the world and the protagonist flow throughout the game.

Flow is very important in The Messenger. You feel you’re playing it thanks to how much control that is given, which impact the pace and precision of your movements. The design decision to give more degrees of freedom of movement by hitting objects and projectiles makes the game combat feel very dynamic, and this is explored all throughout the game, especially so in boss fights. Since The Messenger is a game about repetition, the way to master a boss is to predict and adapt our movement to their patterns. It’s like facing a Super Meat Boy hypothetical boss stage, which makes me imagine imagine how a metroidvania version of that game would look like, given how The Messenger deals with checkpoints, putting lots of save points between quick platforming blocks, and dishing out a suitable death punishment to accommodate this decision, with an imp eats your game currency orbs until he is satisfied on your next attempt. 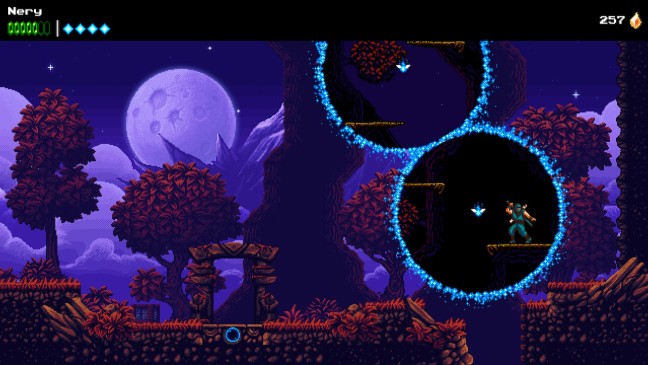 This is done exhaustingly by using a few different types enemies peppered throughout pre-determined spots in the stages, with some punctual exceptions. While this is practical for making you develop a muscle memory and improve your pace and precision, it also helps to  value the enemies that are placed in secret areas, but as a counter, it also makes the game quite easy. I can count on my hand the platform sections that made me retry over and over again, and it felt like that was a conscious decision by the developers. I don’t see that as a bad thing, because this suits the progression of the game, but for people looking at The Messenger as a successor of the classic Ninja Gaiden series, they may end up disappointed.

Thanks to its many innovations, it’s easy to recommend The Messenger for anyone looking for a new 2D platform experience. Its writing is filled with Devolver-like self aware humor, even going as far as pointing out that the game’s hook of playing with the 8-bit/16-bit generational transition is their big differential, and how everything that happens all throughout is due to the protagonist being dumb enough  not to understand the risks his actions. As the quote usually attributed to Mark Twain goes: “They didn’t know it was impossible, so they did it”.

Review: You asked for it! Scott Pilgrim Vs The World: The Game is back https://entertainium.co/2021/01/19/scott-pilgrim-vs-the-world-the-game-review/