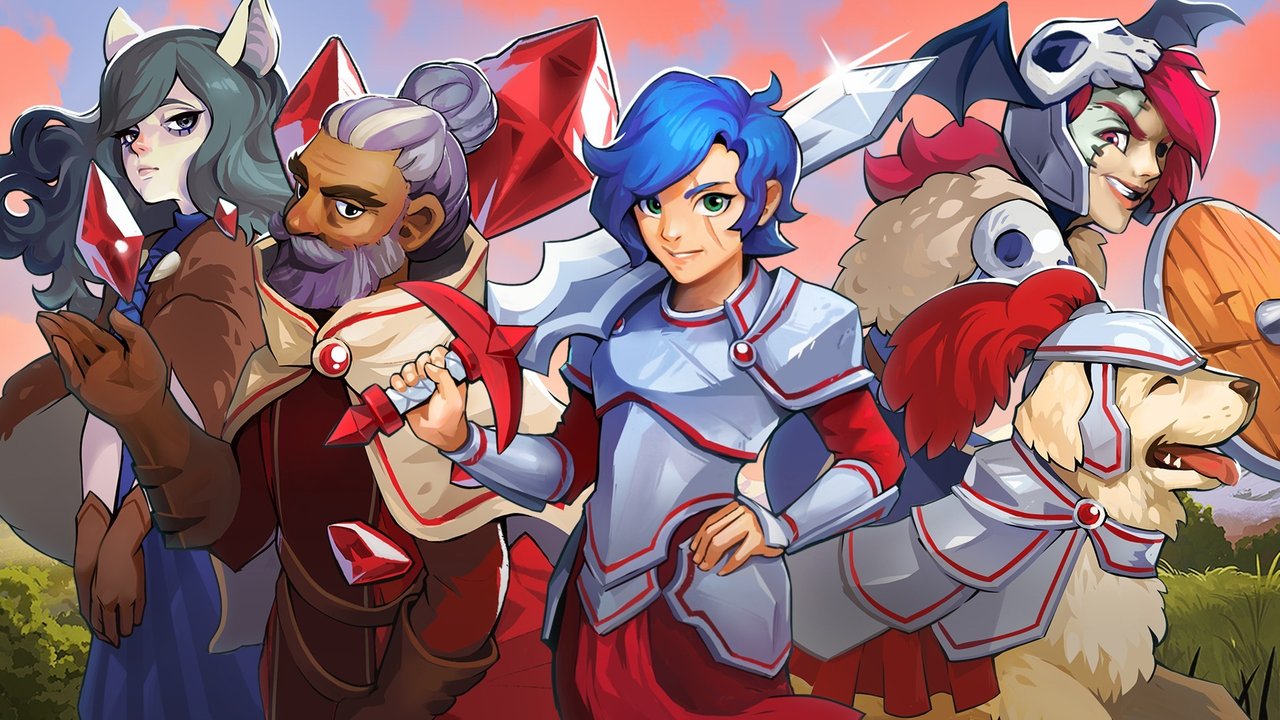 I really dig what Chucklefish has done with Wargroove. It manages to be a double-sided coin that serves a painful reminder that it’s been eleven years since a proper sequel to Advance Wars.

Announced and teased early on in the Switch’s lifecycle, Wargroove proved to be one of my most anticipated games. It evoked Intelligent System’s classic series Advance Wars in just about every way, and since then, I couldn’t help but keep an eye out for its release. It took Chucklefish — a British dev house known for the indie survival-crafter hit Starbound — a little while to get it all ready, and now that it’s finally out, Wargroove more or less pays off on its promise to be a decent distraction for fans clamoring for what seems like an impossible follow up to 2008’s Advance Wars: Days of Ruin. That’s especially true considering that Fire Emblem has been that studio’s focus for the last decade, and it doesn’t seem like that franchise is showing any signs of stopping.

Wargroove has a lot in common with a strategy game that Capybara Games released years ago called Might and Magic: Clash of Heroes. While they don’t play necessarily the same, they share the same approach, since they both play off gameplay mechanics from other established and beloved franchises under a different coat of paint. In Wargroove’s case, it plays like Advance Wars to a ‘T’. So much so that the same problems from its inspiration show up, even with the slight tweaks to the formula that Chucklefish threw in.

It all starts in a peaceful kingdom that’s suddenly thrown into war when an enemy faction shows up, one that has the power to raise the dead, much like the White Walkers from Game of Thrones. Seeing that it’s pointless to try and fight off this threat at the current stage they’re at, the newly-appointed queen — the king gets murdered during the prologue — decides to make a run for it with her advisor in order to gather allies and destroy their enemy’s source of power, a demonic staff that powers their leader’s necrotic abilities. And that’s where the game really picks up, once she starts running into the other peoples of the world, and getting acquainted with the other factions along the way.

These factions also pop up during missions as you make your way through the single player portion, but the real deal for having them around is the option of fighting as them in the other modes, like multiplayer and arcade. Thing is, although these different teams look quite different, and boy, they do, thanks to some of the best and chunkiest pixely visuals you’re likely to see outside of a GBA or DS cart, they all pretty much play the same, since their units are all the same, only under different graphics. But in any case, the real variety to these factions plays off from their leader units who do carry different powers, called Grooves, which can be activated after they fight for a bit in the battlefield, like the princess’ healing wave, which heals friendly units in a certain range, or the forest people’s leader’s teleport power. They influence combat in a smaller scale than Advance Wars’ CO powers, which covered a lot more ground and were able to affect entire maps — but since Grooves can be used much more often, usually after a couple of turns, they make for a much more dynamic mechanic that can help get you out of sticky situations more easily.

In any regard, the real shining point to Wargroove is its combat and level design. If you’ve ever been into Advance Wars, you’ll instantly be familiar with how Wargroove works. Combat is grid-based, and every unit type can only move a certain number of squares, and their ability range can only be used at either point blank range when moving next to an enemy, or by some squares. While ranged combat is still by far the most powerful way of dealing with the opposition, the fact that hero units often dot maps during missions, they’re also able to wreak some havoc of their own, and can handle themselves quite well in battle. The counter to that is that if they fall, it’s game over to their team, regardless of the current objectives. During my time playing, I managed to lose many missions due to that, mainly because I grew to rely a little too much on their powers, instead of smartly building up my own army and making wise tactical moves in order to overpower my opponents.

Putting together a decent opposition to the enemy proves to be paramount as you progress through the game, which makes some of the missions slightly repetitive at the outset, since most of them begin with only a handful of units at your side, forcing you to repeatedly follow the same steps with each new match. Taking over neutral buildings help you earn some gold as the turns pass, and you use that gold to recruit new soldiers for your ranks. The enemy does the same on their end, but if you can manage to take over their buildings, you’ll get the upper hand. It’s not nearly as easy as it sounds, though, thanks to the rock-paper-scissors nature of the combat that very quickly imposes a pace to how missions play out. That happens early on in the game when spearman units start popping up. They proved to be quite an obstruction since they can make mincemeat of normal grunts, as well as knights.

Once you start paying attention to each unit type’s pros and cons, it’s fun having to think ahead while putting together your forces. Will you pump out cheap grunts and try to overwhelm the enemy in numbers, or start investing on more specialized soldiers who could possibly put you ahead in the race, but leave you penniless? It’s probably a good thing that missions tend not to take too long to beat, because early mistakes can really turn your game sour at later stages of a combat scenario, and since there isn’t an option to quicksave during levels, every click and decision can prove vital. That is what makes Wargroove both exhilarating and tense as all hell — or at least as much as a game distraction can be, but let me have my fun in my review! — since some missions have strict objectives that leave little room for mistake.

It’s cool then that you can take breaks and put in some time in different game modes. Arcade is probably the most “easygoing” out of them all. The quotation marks are there because the combat in this is still very much backed by the same principles I mentioned, but are only part of a series of five fights that you have to carry out with different armies at your selection, which are unlocked as you progress through the story. By doing well in this mode, you can also win stars, the currency to buying new items for the gallery. I tend to like Arcade mode more than the actual story simply because the final objective always seems to be far more reachable, simply winning five times in a row. Yeah, it’s quite tough to pull it off, considering that the maps are completely different from the normal game’s, but it’s a much more reasonable goal, hence the ‘Arcade’ name.

Puzzle mode is another gem in and of itself. In it, you only get a single turn to finish off one of 25 levels, forcing you to be extremely cunning and plan each and every move ahead, like in a game of chess, a really cool twist considering the limitations that are imposed to you regardless of the opposition. Knowing that every one of these levels can be completed in one move feels bonkers to me, and I’m excited to try and finish all of them off on my own time. I know, I’ll probably give up along the way, but who knows. Regardless, Puzzle mode provides a lot of replay for Wargroove as a whole, and along with Arcade, is a great activity to partake if you grow tired of the story mode.

Multiplayer is your standard affair, allowing 2 to 4 players to duke it out in big ol’ maps over the web or locally, on the couch. I usually tend to avoid playing turn-based games online, so I didn’t partake in any fights, but for fans looking for fresh meat to pounce on, or have fun drinking and slashing while partying, this could be just what they’re looking for.

If you end up disliking all of these modes, you can create your own missions thanks to an extensive edit suite that allows you to put together levels and even cutscenes to your heart’s content. Speaking of content, anything you end up creating can even be shared across systems, so say you craft something on your Switch, any of your friends playing the game on other platforms can also enjoy it. Unlike the story mode, however, editing does not offer any sort of tutorial, so you might want to check YouTube to see if anyone’s posting videos of the subject in case you run into any issues along the way. It’s great to see that this might just keep Wargroove alive in your hard drive long after you’ve beaten the core content. I’m certainly keen on checking these out down the line for myself.

For as samey as the factions might feel in the long run, it’s notable that Chucklefish has gone to such lengths to include so many different options to pick from. I’m very into playing as the forest people thanks to their leader’s feisty nature and special power, but I found that a lot of the other teams are also fun to look at as well. Each carry a unique style that makes playing as them fun, even if they play so similarly, although it would’ve helped to have more distinguishing features aside from a single unit’s special skill and the obvious visual cues.

I really dig what Chucklefish has done with Wargroove. It manages to be a double-sided coin that serves a painful reminder that it’s been eleven years since a proper sequel to Advance Wars, but also that other developers are more than capable of stepping up to the plate if Intelligent Systems won’t.