Souls-likes walk a fine line. How far do they go to capture the essence of Dark Souls while still making something their own? It’s not an easy task. Games like Salt and Sanctuary answered that by more or less adapting their inspiration onto a two-dimensional plane, while others like Hollow Knight instead used it as a basis for something fresh and exciting. Sinner: Sacrifice for Redemption attempts something similar — a sort of balance between the two extremes — that ultimately succeeds, but not without some stumbles along the way.

Sinner is a Souls-inspired boss rush a unique hook: every time you defeat a boss, you become weaker. You start out strong and fully-equipped, only to slowly lose that strength over time. You are Adam, a man who seeks to reclaim his memories by vanquishing the manifestations of his greatest sins. The storytelling remains light and vague in a very Dark Souls way. Each boss is introduced with a brief cutscene detailing a bit of their life — who they are and how they came to be what they are now — before transporting you to their arena, never dwelling on the specifics for long if at all. 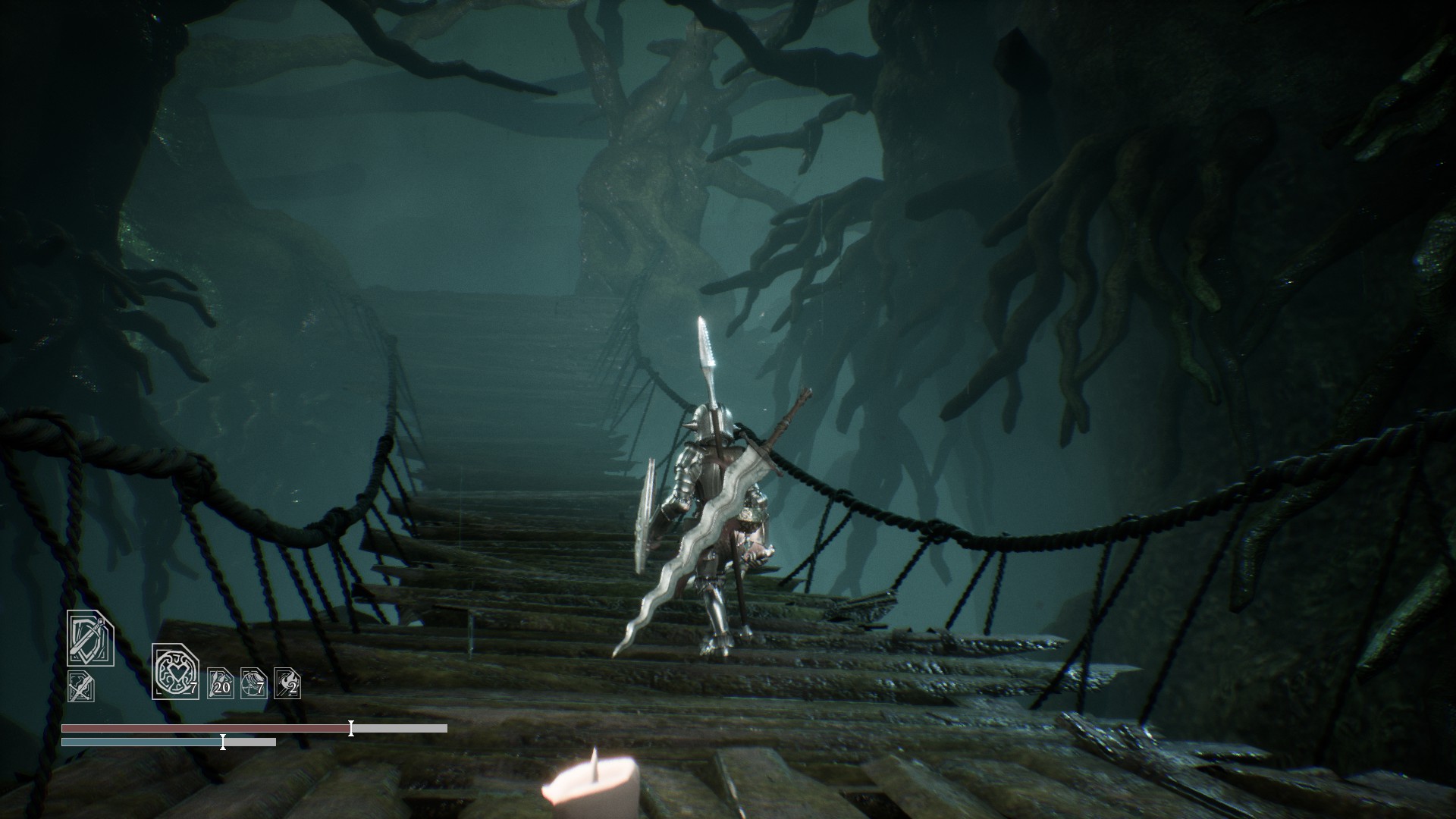 Upon choosing which foe to fight, you automatically give something up. What you sacrifice depends on the boss. Each one is associated with one of the seven deadly sins, their sacrifices playing into those themes (the one representing gluttony takes away a couple of your health flasks, for instance). Sinner is essentially a puzzle then: which bosses can you defeat without what attributes? Maybe you’re confident in your ability to avoid damage and decide to give up a couple health flasks or weaken your shield first. Perhaps you don’t need your spears or firebombs and decide to give up some of those instead. You’re always going to end up sacrificing everything eventually, but the order in which you choose to give everything up is always unique.

The very first boss I defeated left me with a lower health and stamina, which proved to be a bad idea since I found myself struggling to survive long enough to get a feel for each boss. So I revived the boss and retrieved my sacrifice and decided to start elsewhere. Weighing the cost of each boss’ entry fee, I decided to start with Slothful Yordo, a lone commander accompanied by a dispatch of soldiers. The sacrifice for him was to make it so my character would stop and catch their breath upon fully depleting their stamina. A simple enough price — almost inconsequential, you’d think — but a sinister one given how easily it spelled trouble for me. From there, it was onto Proud Rhodes, a giant clad in armor wielding a massive ax. The cost to fight him was a reduction in attack power. Easily one of the least worrisome sacrifices I could make given how I never felt particularly strong to begin with.

Once I figured out what order I could feasibly defeat each boss in, Sinner settled into a simple rhythm of trial and error as I learned boss patterns and slowly worked out how best to fight them. The combat has a deliberate feel to it. While Adam’s strikes are fast and responsive — at least if you’re using the sword and shield — the animation priority can still be felt. Missing the enemy because you struck too soon or too late and having to take your opponent’s counterattack is still as devastating as ever. It very much feels Souls-like in a good way, understanding the way they play and why, leveraging it to match Sinner‘s own take on the genre. If I have one criticism of its combat, though, it’s that I never felt like I knew how to parry. Sometimes I just held the shield button down and released it at the right moment, other times I tapped it instead. It never felt consistent. 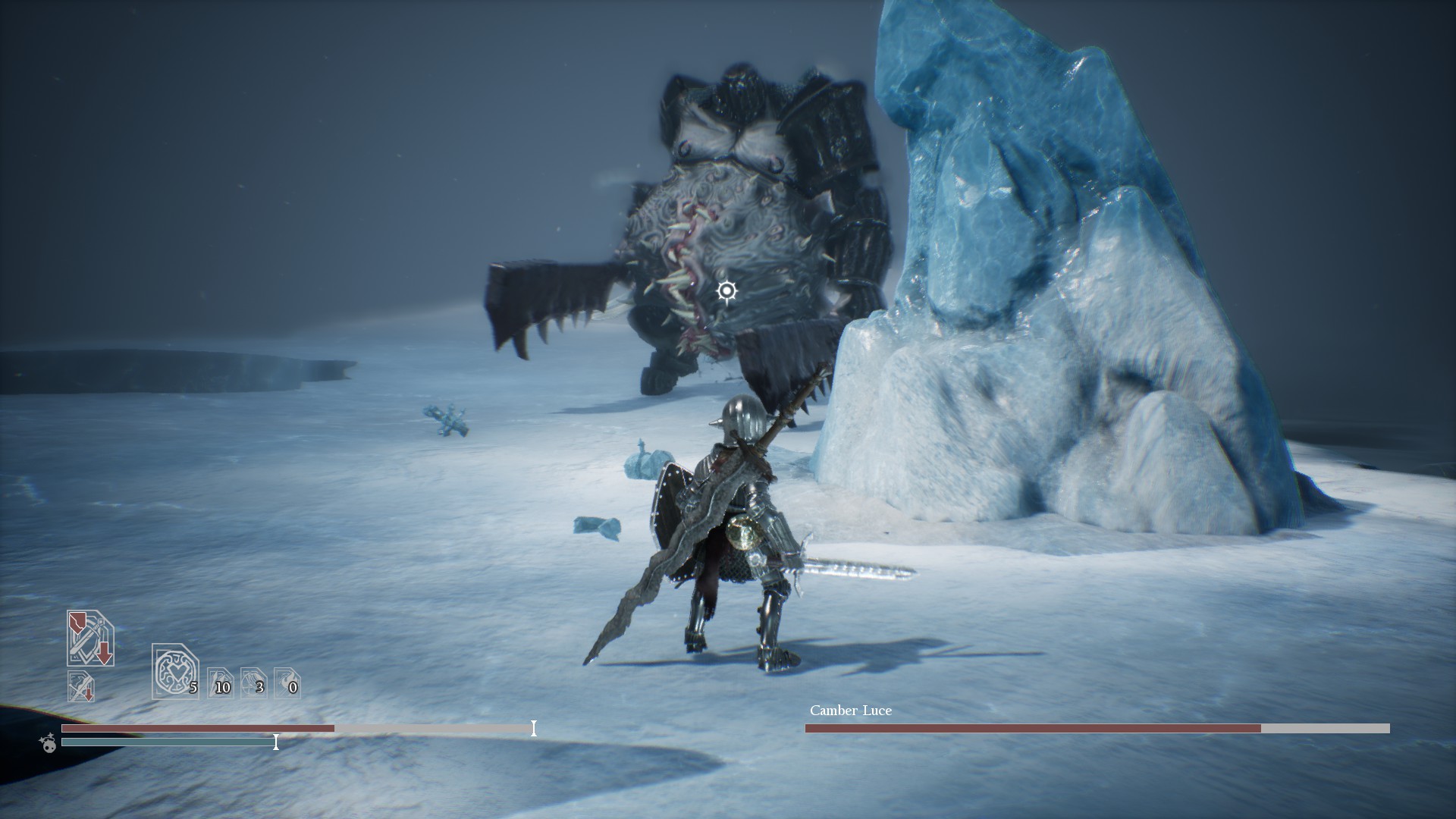 Sinner‘s bigger problem is how few of the bosses are fun to fight. Wrathful Angron and Envious Levin Undok in particular are the weakest of the bunch. The former because it’s slog of waiting for them to use the right attacks so you can deal damage, and the latter because Sinner isn’t up to the task of fighting multiple foes. The basic ideas are good: a giant who dwells in a sea of lava who can destroy what little ground you have? Cool! A pair of twins who can tag in for one another at will, each with their own fighting style? Sounds great! Unfortunately, the execution doesn’t land. Angronn is simply a bore and Levin Undok often overwhelms due to just how much it throws at you at once. It feels less like a carefully choreographed two-on-one duel and more like a haphazard mess. The final boss isn’t particularly enjoyable either due to there being virtually no room for error.

There’s definitely an audience for that sort of challenge, but at some point, it feels like too much. All the other bosses feel like they were built around being able to be beaten regardless of whatever your current attributes are. The final one feels like it’d be damn near impossible even if you hadn’t spent the last several hours losing strength. It makes for an unsatisfying finish to what is otherwise a strong, interesting challenge. Sinner redeems itself on the strength of its pitch and the execution therein, it’s just a shame it can’t finish as strong as it starts.