I had no expectations for a new Dragon Ball Z game, especially one that would not have anything to do with Arc System Works’ beautiful Dragon Ball FigherZ which came out a little while ago, but to my surprise, Dragon Ball ProjectZ, now called Dragon Ball Z: Kakarot turned out to be one of my favorite games from this year’s E3, following an impressive showing at the Bandai Namco booth.

What makes Dragon Ball Z: Kakarot especially surprising is that even though it’s yet another DBZ game that goes through the same old story arc that many other games have already gone through ad nauseum, it still managed to feel fresh, thanks to some smart inclusions and an overall fantastic gameplay system. Yes, it follows the path of post-Dragon Ball Son Goku and the eventual reveal of his true origin as a Saiyajin, his fight with his brother Raditz, up to the big bout in planet Namek against Frieza. There’s still no word on whether or not this game will go through the entire Dragon Ball Z story, but if I had to guess, it probably will.

The good news is that there’s a lot of cool new little bits of detail that got thrown in alongside the main story, like callbacks to the original Dragon Ball in the form of returning characters like the friendly Android 8, who gives you a sidequest while you power up Goku before facing Raditz. It’s small touches like that that made Kakarot feel special, and not just another rehash of DBZ. It plays like an exploration adventure game like The Witcher, but once you engage in a mission, it opens up into an actual fighting game with some platforming elements.

Android 8’s quest, for instance, tasked me with taking out some evil bots who were remnants of the Red Ribbon army, one of the main baddies in the first Dragon Ball. After flying around on top of Nimbus, Goku’s trusty cloud — I could also fly on my own, but man, surfing through the skies felt much more fun — and hitting the map marker where the mission took place, DBZ:K turned into an action game, as I beat the ever living crap out of those enemies, but not before figuring out their different types and destroying the ones that could cure their buddies before moving on to the bigger units. 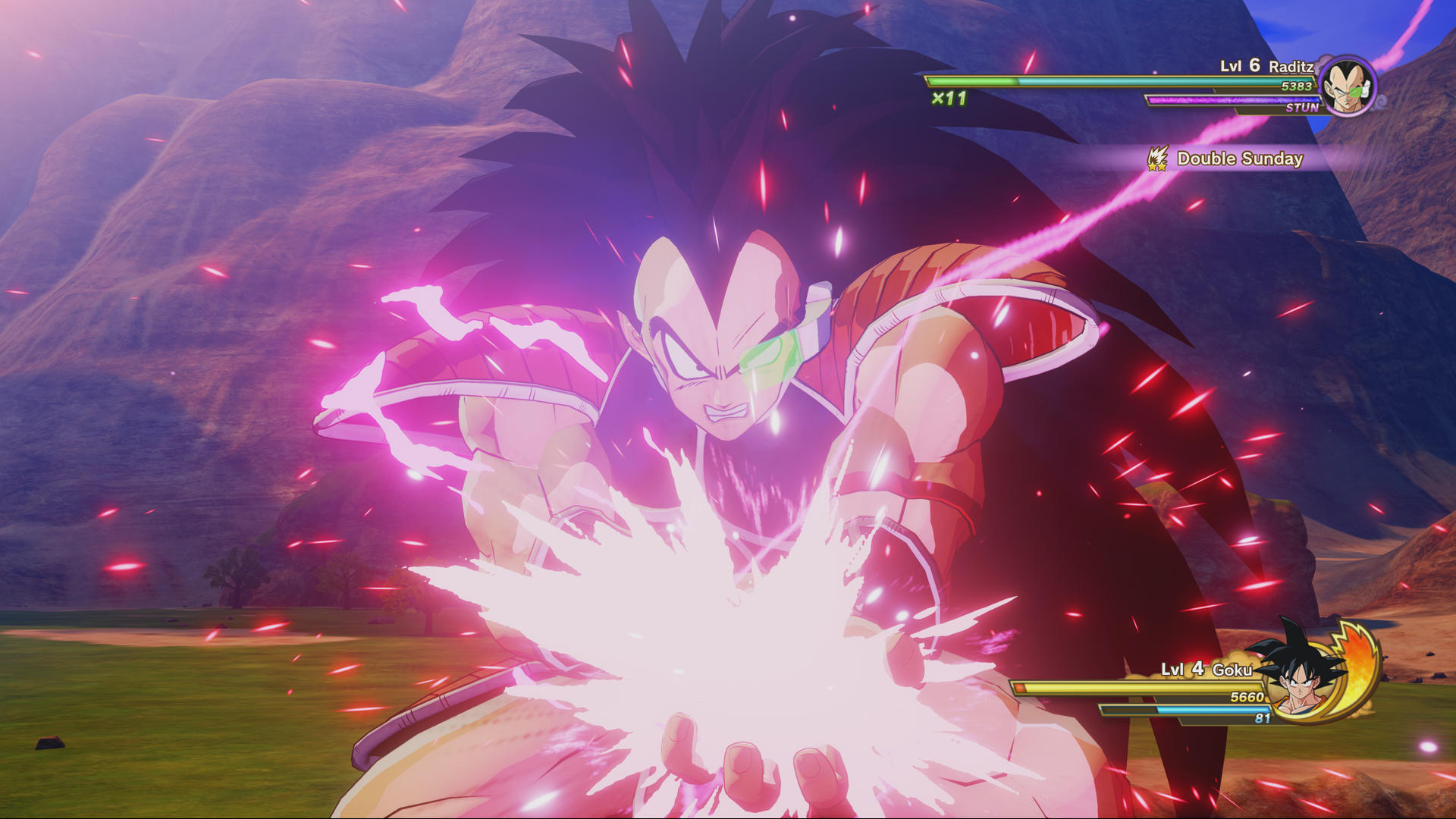 Since the demo only lasted for so long and its main objective was to go face Raditz, who had kidnapped Goku’s kid Gohan, after taking care of Android 8’s problem, I went straight to that fight, but there were many other things to partake in during the demo that I could’ve done, like fishing — using Goku’s old severed tail as a lure, which is both creepy and hilarious at the same time — as well as run into other side quests like one that involved his old pal Nam, who he fought against in a tournament, along with smaller activities that could potentially award Goku with consumables like Senzu beans, the miraculous seeds that can bring back a person from the brink of death, that can be used to do exactly that during fights.

Fighting Raditz proved to be quite a challenge at that point, since I hadn’t really powered Goku up at all, but it was really fun overall, thanks to the host of different abilities and moves I had at my disposal, which could be performed by combining the trigger and face buttons. Stuff like the Kamehameha, overhead double axe handles, and other Dragon Ball Z signature moves you probably have seen hundreds of times before, which was pretty damn cool to perform. The first phase of the battle had both Goku and Piccolo, who was reluctantly helping his rival out in that point in the story, face off against Raditz. I was able to do some co-op moves with the A.I-controlled green dude, and even command him to throw some of his own projectiles at Raditz in order to distract him and leave an opening for me to attack.

After wasting many of his lifebars, Goku’s big bro went down, but as expected in Dragon Ball, he came back roaring, and it was up to Kakarotto to take him out for good, and at that point, it took every ounce of my weakling Goku to take him out — I literally had a sliver of life left by the time the fight was over. During that phase, Raditz threw all sorts of cool tricks my way that required more than simply guarding, like a spinning laser attack that required me to fly dodge before diving back to counterattack.

The core fighting system in Dragon Ball Z: Kakarot felt tight and responsive, and to my surprise, it was way more involved than what I had expected from a game like this. Sure, the fight was probably programmed to be a little easier since that was a show floor demo with a time limit, but I really felt like it took some effort on my part in order to get through it, which I appreciated and had a lot of fun doing.

It’s also no surprise that Dragon Ball Z: Kakarot looks so good. CyberConnect 2, the same studio behind the beautiful Naruto: Ultimate Ninja Storm games is handling the development, and to all accounts, it’s doing the source material justice, as well if not better than Dragon Ball FighterZ. After the lackluster adventure game Jump Force was, I’m really happy with how Kakarot is turning out.

There’s no firm release date for Dragon Ball Z: Kakarot, safe to say it’ll be out sometime in 2020 for PC, PlayStation 4, and Xbox One.