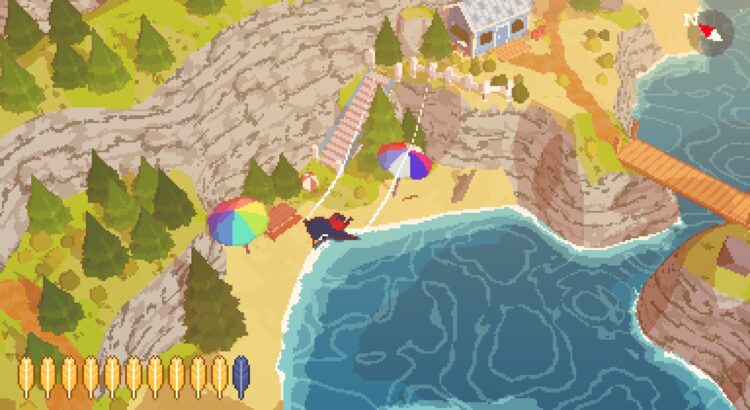 For as much as videogames (particularly the big-budget games space) love to make games that are long and massive, often concocting ways to keep you forever engaged (as or as close as they can) in their worlds, there’s something to be said for shorter, smaller games. The sort you can play through in as little as a few minutes or maybe as much as a couple of hours. The sort of game you can play on a whim when you need a break and can get something out of. Something small and refreshing.

A Short Hike follows Claire, a young bird who heads out on a trip to a park with her aunt to get away from the city. Only, her mind’s elsewhere: she’s expecting an important call, and is kinda (and understandably so) focused on it too much to really enjoy the trip. Problem is, there’s no reception out here — nowhere except at the top of Eagle Peak, anyway, which is apparently only “a short hike” away.

Starting up the game, I expected things to be pretty simple. Just make your way up the mountain, enjoy some nice scenery, and be done with it. Easy. Something quick and simple was what I was looking for at the time. In reality, A Short Hike‘s got a lot to it. While you could just make your way up the mountain, there’s so much to see and do that you’d be missing out on almost everything that makes the game so delightful. You can dig up some buried treasure, play a game of beachstickball (think volleyball but you use sticks to hit the ball instead of your hands; oh, and it’s a co-op game too), partake in parkour races, go fishing, help a struggling artist, and more. The park’s got a lot to see and do along your way to the peak, and it’s all well worth seeking out.

I spent a lot of my time just goofing off and exploring, running up and down the mountain because it’s just so much fun to move around. That’s in part because movement in A Short Hike just feels good — the ease with which you can climb, glide, and run around goes a long way — but mostly it’s because the space invites you to roam around carefree. It wants you to slow down and poke around and chat. Everyone’s very chatty and always has something to say, whether that be insightful, just plain silly, or some combination thereof (which is pretty common), and there’s almost always something to find by going off the trail. No reason to rush your way up to the summit; take your time and enjoy the ride.

I love these sorts of games because they’re so simple and mundane. So many videogames deal in the extraordinary and fantastical that something more light and grounded always feels fresh. They provide a nice break, a welcome space to retreat to when you need to get away from it all or just want something nice and pleasant to play. The two hours I spent with it were delightful and invigorating. Its writing is warm and heartfelt, the whole thing exuding an infectious upbeat energy that’s a joy to partake in. It’s a lovely little game and a welcome respite.