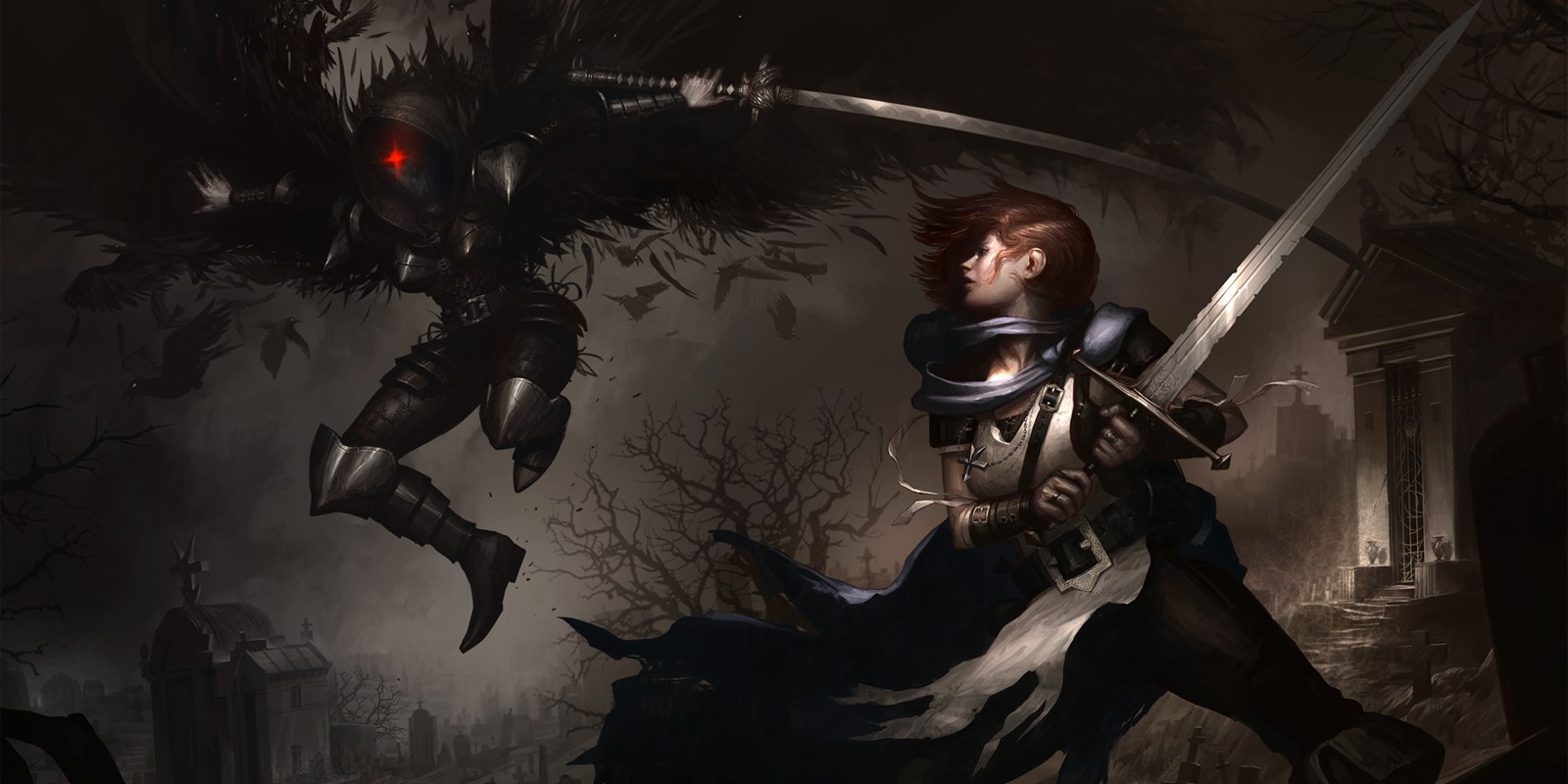 Your lack of faith is disturbing.

The Switch has been a hot platform for indie game re-releases ever since it was brought out a couple of years ago. Following suit, Dark Devotion is one of the latest offerings, coming a few months after its initial release back in April on PC and the other consoles. It’s a 2D side-scrolling action-adventure game from Hibernian Workshop that draws inspiration from a lot of different sources, mainly stamina management and combat mindset of the Soulsborne franchise, as well as the map structure of the genre-that-shall-not-be-named… you know the one I’m talking about.

Like many indies that have come in the last few years, such as Death’s Gambit, Dead Cells, and Blasphemous, Dark Devotion is not shy about the fact that it’s a mishmash of ideas clumped into a single game, even though it’s ultimately what holds it back from being a fantastic game of its own. Don’t get me wrong, Dark Devotion gets some things right, but it tries too hard to embrace a lot of different design ideas and in the process it lacks the overall cohesion that is the basis for a game you would want to keep coming back to.

Dark Devotion’s premise proves true to its name as you step into the shoes of a member of the Templars tasked with exploring a huge maze called the Ancient Dungeon in order to cleanse it from whatever evils lie within it as a test of your faith and devotion to the cause. Every single corner of the game’s world is positively dark and hopeless, which goes shockingly well with the cryptic and utterly unfriendly delivery method for just about any piece of information within the game world, be it the story or simply trying to figure out how its systems work.

I always try not to bring up a bunch of comparisons when reviewing games, but it’s hard not to do so in Dark Devotion’s case since it obvious attempts to go for what From Software so brilliantly set up in their games. In this case, From’s success comes from just how well they manage to cram lore and useful information, while at the same time making it all somewhat obtuse at first each time you come upon any piece of equipment along the way in games like Demon’s Souls. Nothing is obvious right away, but you’re eventually able to piece together what a certain item does, or in the case of their games’ core systems, how to deal with, say, upgrading or even creating equipment of your own.

In Dark Devotion’s case, none of these things are made apparent, leaving you to try and err on your own due to the arbitrary nature of how weapons and other pieces of equipment become available while you play. That’s mainly due to the fact that every item you come up to is seemingly random in its delivery, and since Dark Devotion is roguelike in the way that it forces you to start picking nearly everything back up from the very beginning after every death, there’s no solid ground to stand on and understand what is permanently available and what isn’t.

That proves to be one of this game’s most annoying aspects, which is coupled with what it borrows in terms of map structure design from Metroid — the grid base, and having to unlock paths in order to keep going — a marriage that falls apart when you’re not allowed to backtrack at all during your runs. Doors are usually one-way, and you’re forced to commit when jumping down from platforms, so memorizing your path through is really the only way to make any headway, but due to how items are seemingly random thrown in, there’s no real sense of discovery or reward as you get deeper into Dark Devotion, unless you defeat a boss and are allowed to keep that bit of progress even after you die.

Dead Cells in particular is excellent in making each attempt feel like time well spent since you’re slowly building an armory of your own, and learning how to deal with different enemies by letting you go up against them repeatedly as you make your way through its randomly generated, but still logically put together maps. Dark Devotion, even though it doesn’t shift its world on every one of your attempts, still manages to feel like a slog. You’re forced to repeat the same actions every time you come back to the home base, as well as through the entire map, like picking up your equipment again at the blacksmith, opening chests, unlocking doors, and deactivating traps. The repetitive nature that can make run-based games so good is hard to achieve, and Dark Devotion misses the mark by going to far in one direction.

If you manage to get a good weapon and in the groove of the combat, though, this game manages to be really fun. The shoulder buttons are used to roll dodge back and forward, while the triggers control your weapons, depending on which hand they’re equipped in. If you’re using a sword and shield, the starting equipment in the game, you get to defend with the left trigger and attack with your right. There’s only one type of attack to use, but you can still try and do some fancy reposting if you’re feeling lucky. All of your actions are governed by the stamina bar, and like many games that use this mechanic, it can be the bane of your existence if you go overboard, so keeping a cool head on all times will prove to be your best course of action throughout Dark Devotion.

Enemies are pretty varied and can prove to be quite a challenge, even at the very first moments of the game. Your character can only take a certain amount of damage before biting it, and the stamina bar is slow to recharge, leaving you a bumbling defenseless fool slowly trudging about if you run out of breath. You can usually avoid most enemies, but they drop the faith points you need to use in order to activate healing posts and other interactive objects that you repeatedly use in each and every run. Bosses are also decently designed, bringing patterns you can learn to avoid and exploit, balancing the difficulty quite well, if you manage to reach them, that is.

Dark Devotion’s visual presentation is mixed. I’ve long lost count of just how many indie games use pixel art, but the result is quite nice in this game. Characters aren’t too small and animate very lively. The world is detailed and uncluttered, for as lacking of light and color as it is. I could’ve done with a better font choice, though, as text boxes are hard to read even while playing in docked mode, let alone portably. The graphic UI is kind of a throwaway as it makes it especially hard to keep track of how much health you have left, or the meaning behind the many buffs and debuffs you inexplicably contract while playing. There’s not much to say when it comes to music or voices, as there’s not a whole lot of either, but the screams and grunts are about what you’d expect to find in a game like this, that is, pretty gruesome.

Given just how competitive the eShop is when it comes to indies and even more when filtering down to the type of experience that Dark Devotion goes for, it’s difficult to recommend it over anything else that is currently out. It tries too hard to include a whole bunch of elements that don’t sit well together thanks to awkward design decisions that just work against it, making it a game you’d wouldn’t want to spend a whole lot of time hitting your head against it even if that’s your shtick.