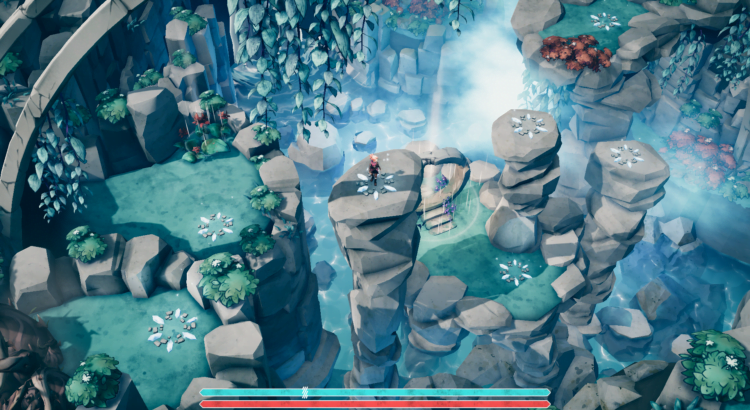 Typing games always serve as a good reminder that I’m an awful typist. I may be a writer, but I can’t type well consistently. I’m constantly making typos and generally hitting the wrong keys. I would hope that playing games like Nanotale (and its predecessor Epistory) might make me better, but so far no good. If anything, it’s only making it that much clearer how bad I am.

Nanotale – Typing Chronicles launched in Early Access some weeks ago and I’ve been playing around with the current build. If you played its predecessor Epistory, you can expect more of the same. It’s still early, of course (like, very early), so who’s to say how much different it’ll ultimately be. Right now, though, Nanotale‘s looking to be a fantastic follow-up.

Nanotale puts you in the role of Rosalind, an archivist who’s first day on the job takes a sharp, unexpected turn. She and her mentor are out cataloging plants and wildlife in the forest as part of Rosalind’s introduction to being an archivist. The two of them split up, her mentor telling Rosalind to go on ahead and explore on her own, when she comes across a dying fox — not unlike the one from Epistory. She’s attacked by monsters shortly after, at which point the fox’s spirit helps her and takes her deeper into the forest to safety.

Here’s where the game begins proper. As it’s still early, only the opening hours are playable, but they provide a good taste of what’s to come. Like Epistory, you interact with the world entirety through typing. A tap of the spacebar opens your spellbook, allowing you to cast spells on enemies and objects, research plants and wildlife or other points of interest, and chat with folks. The game even defaults movement to the ESDF keys instead of the usual WASD configuration, as the former is easier to swap between if your hands rest on the traditional typing position.

The current build takes place entirely in the forest and sees you combating a sort of corruption that’s begun to infest the area. The locals, a race of tree-like beings, are mostly indifferent toward Rosalind’s presence, generally deferring to their queen on such matters. As you roam the area, you slowly gain more spells that allow you to alter the properties of any given spell. For example, instead of simply typing whatever word is on-screen to interact with whatever object you wish, you can type “ray” to conjure a beam that fires from your position, the objects you can interact with acting as your targeting system. You can then take that beam and type “large” or “sharp” to alter its properties. There’s some light problem solving, usually involving ways to open the way forward, along the way that makes ample use of Rosalind’s spellwork. It’s nothing terribly complex — herding sheep and cutting through rock don’t pose much difficulty — but it is a touch hard to aim your spells sometimes when your target is just outside of or on the edge of the screen.

Combat is intermittent, usually made up of quick skirmishes against a few foes scattered along your path, along with the occasional wave-based bout of survival. Being a quick and precise typist (i.e. not me) is helpful here as it doesn’t take long for the enemy odds overwhelm. Each monster takes multiple hits to vanquish, the stronger ones using longer more complex words per hit. It’s tricky insofar as it’s a matter of management than simply typing swiftly. I nearly fell a few times due to not noticing one enemy approaching me from elsewhere because I was too focused on another. Admittedly, it’s tough to tell you’re taking damage unless you’re keeping an eye on your health bar at the bottom of the screen, which wasn’t always my first priority when I’m focused on typing out whatever words I need to spell. The game’s very forgiving, however, offering you one free revive that banishes every monster on-screen, which is nice.

As this is an early access game right now, it’s prone to the occasional bug or glitch. I ran into a few early on in my time with Nanotale (weird camera issues, mostly), but to the developers’ credit, they’ve been releasing fixes quickly, and it hasn’t been a problem recently. Still, if you’re not up for playing something that is still very clearly in an early state, you might want to wait a bit. That aside, if you played Epistory and want more or are up for more typing action in general, Nanotale‘s looking like it’ll deliver on that splendidly.

Nanotale is currently aiming to leave Early Access sometime in the first half of 2020.