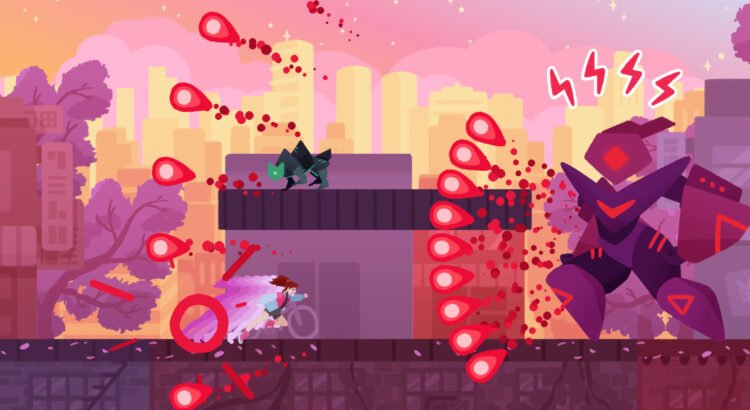 If there’s one thing developer Vertex Pop is good at, it’s making games that feel good to play. Their last game, Graceful Explosion Machine, was a side scrolling shooter that, on top of everything else it did well, felt great all around. Super Crush KO, their latest game, is much the same. It takes some of the basic ideas that made Graceful Explosion Machine work and tune them for a brawler, resulting in a superb, fantastic feeling game that’s a joy to play.

Super Crush KO puts you in the role of Karen, a young woman who finds herself fighting an army of invading robots after their leader steals her cat. Sure the world is suddenly under attack by alien forces, but they stole your cat. They stole your cat! Retrieving them comes first. It’s fun and silly plot that serves primarily as context for the action more than anything, though there’s plenty of end-of-level quips that add some flavor to the proceedings.

Super Crush KO essentially takes the design of Graceful Explosion Machine and applies it to a brawler. Where Graceful Explosion Machine was all about giving you the tools to constantly cut through the near-endless swaths of enemies in your path by managing a bunch of meters that rapidly drain and refill, Super Crush KO is all about giving you the means to smash your foes into oblivion via long, seamless combos.

You have two different types of attacks available to you. Your basic four-punch combo and a variety of special attacks, such as an uppercut, air-dash, a ground shockwave, a forward roll, and a rifle (which has its own cooldown meter should it overheat). These attacks are governed by a purple meter in the upper-left corner of the screen. Each move takes a segment of the meter, meaning you can’t rely on them and them alone. Luckily enemies fall quickly and always drop a ton of purple gems you can collect to refill that meter almost instantly, allowing you to use your specials regularly and effectively. There’s also a second meter that fills from collecting blue gems that fires a massive laser that deals massive damage to anything caught in its path, which is useful for the tougher, more resilient foes.

By using all these attacks in concert, you’re able to effectively render your opponents useless as you juggle and pummel them until they’re no more. Super Crush KO emphasizes going all-out at all times, using whatever you have available to its fullest. The longer the combo, the higher the score and the higher your rating will be (assuming you’re interested in chasing high-scores).

Combos are a breeze to pull off, as such, and feel great too. Everything chains together seamlessly, letting you juggle foes and jump between targets easily. Got a bunch of robots lined up? Start by rolling through them to cluster them together so you can finish them with the ol’ punch combo. Then if there’s more right above you, throw out an uppercut and start pummeling them from there, chaining into an air-dash/kick to close the distance to the other nearby foes. Robot preparing an attack? Slam the ground, toss ’em into the air, and unload. And if they’re too far away? just pull out of your rifle and blast them, whether to vanquish them entirely or just to keep your combo going while you approach.

The ease with which you can pull all this off feels incredible. Everything just flows, every move naturally connecting to one another with little to no effort, allowing you to focus on just dealing damage instead of trying to memorize what attacks link into what. It’s similar to how the best action games allow you easily pull off cool looking attacks easily while still having a good deal of depth there for those who really want to dig into it. Where everything feels so smooth and immediate that you don’t ever really have to think through what you’re doing and instead just improvise and see what happens.

The game’s at its best when you have all the abilities unlocked and start revisiting older levels. Where before my first go at the early levels were a touch sloppy, now I was completely decimating everything without so much as a scratch on me. I’m not always one for replaying individual levels for better scores in games like this (generally stuck to the survival levels in Graceful Explosion Machine for that), but I’ve been enjoying going back in Super Crush KO because it all just feels so good to play. I’m not even trying to improve my scores, really: I’m just playing more because I want to.

Good game feel isn’t much of a rarity these days, but it still makes a difference when a game does it well. Super Crush KO is one of those cases. If everything didn’t flow together so well, it wouldn’t nearly be as great. But it all works wondrously. As Vertex Pop continues to excel, I look forward to seeing whatever genre they decide to tackle next.