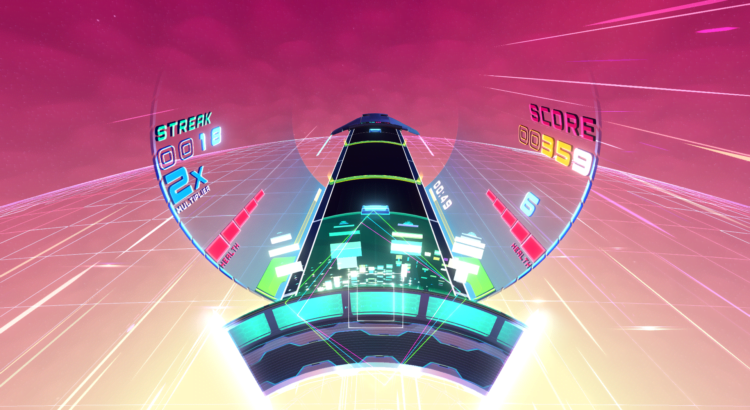 You know how when you play too much Tetris you start seeing Tetris blocks when you close your eyes? Whenever I finish a session with Spin Rhythm XD, I have a similar problem. For several seconds after closing the game, my vision has this weird effect where it looks like everything is slowly moving upward despite being completely stationary. I imagine it has something to do with staring at the track too long, but it feels weird. Anyway, all this is to say that just as the Tetris Effect is a thing, so too is the Spin Rhythm Effect.

Spin Rhythm XD from Super Spin Digital (currently in Early Access on Steam) is a rhythm game with a twist — literally. It sees you hitting red and blue notes that scroll down a track with a wheel you spin that rests at the bottom of the screen. Think of it like something along the lines of Amplitude, but instead of moving a ship between different tracks, you’re spinning the dial to match the color of the notes. It’s a small change, but it does a lot to make it feel fresh.

Your average rhythm game sees you just pressing buttons in time to the beat, maybe occasionally using a plastic instrument of some sort in place of a traditional controller. All you need is a decent sense of rhythm and patience to learn the pattern of the beat. Spin Rhythm complicates that slightly by making you have to move and slide the wheel along the note patterns as well. Learning to memorize the timing of button presses can be a daunting task already, and the addition of having to move the wheel around as well makes matters trickier.

It’s not too bad on the Easy and Normal difficulty levels, where songs are shorter (which I get why, but is a bit disappointing) and the note patterns are much less complex. You have plenty of room to learn how to adapt to Spin Rhythm‘s, well, rhythm on those levels, as you have some actual room to breathe. It’s challenging, but nowhere to the point of being overwhelming. Hard and Expert, however… those are definitely overwhelming. They up the ante considerably, introducing a new button to press (a drum beat that appears as a curved green live on the track) as well as more intricate, complex note patterns that require very deft and sudden movements to keep up.

My first few times attempting any songs on those difficulties lead me to fail within seconds. You don’t have nearly as much room for error, every mistake quickly cascading until the song abruptly ends. It’s the sort of jump in difficulty that becomes easier if you can master the previous difficulty first, as it becomes much less intense a learning process then. The first song I was able to finish on Hard, “Twist Sound” by 2 Mello (one of my favorites), took a long time to learn because of all the sudden twists and turns I had to make while still making sure to tap certain notes either at the same time or in quick succession.

But as with any good rhythm game, just playing the song is where the fun lies. Whether I succeed or fail in the end, it’s the act of playing to the beat that keeps me engaged, keeps me coming back for another session, and Spin Rhythm XD definitely excels on that front. It’s particular take on rhythm games feels fresh and exciting even in this early stage. I haven’t yet messed around much with its new multiplayer mode (it’s basically a server people can join and compete for first place by playing whatever songs are queued up), but I’m very much looking forward to watching the game continue to take shape.