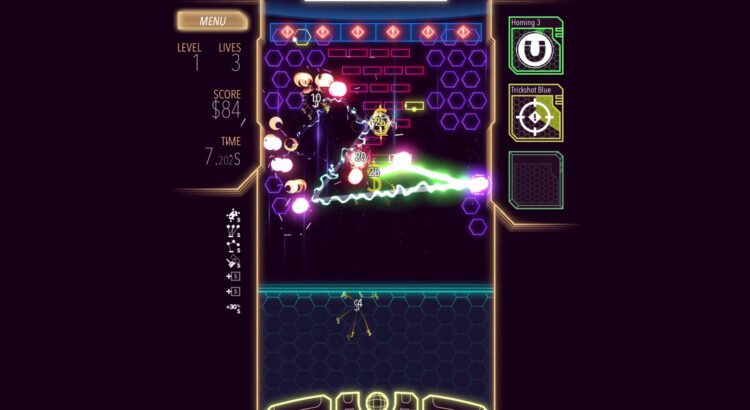 Any time a new spin on an arcade classic comes along there’s always a mix of interest and skepticism. Trying to put a fresh spin on something that already works and has continued to work is no easy task. Modernizing old concepts can easily grow out of proportion and take away from the things that made the original work succeed. For every Space Invaders Extreme, there’s games like Pac-Man Championship Edition 2 — a game that strays too far from the original to the point of being unrecognizable.

Drawkanoid from QCF Design is the latest attempt to to revitalize a classic arcade game. The pitch is simple: it’s Arkanoid (or Breakout, if you’re more familiar with that one) except you draw the paddle and an put it anywhere you like in the designated field. A simple change, but one that alters the entire design of the game in some fun ways.

Being able to create the paddle at will instead of merely moving it back and forth to meet the ball changes the dynamics of Arkanoid drastically. Traditionally, Arkanoid is much slower and deliberate. Levels are complex and require very careful movement and placement of the paddle to direct the ball in the direction you want it to go. It’s a game of patience in some ways because you’re at the will of the game’s physics. Here, it’s more of a game of quick-thinking and reaction.

Drawkanoid is a much faster game. As soon as the ball launches, it’s already zooming about the screen at lightning speed, shattering blocks left and right in a blaze of neon. While time slows down once it hits the lower-half of the screen, giving you ample time to place and angle the paddle meet the ball’s trajectory, it still requires you to act fast as the time dilation only lasts so long. Spend too long considering where to draw the paddle and how to angle it and the ball will suddenly blast to the bottom of the screen. In the early levels, that’s not much of a problem since they usually give you plenty of time to think. In the later levels, not so much. I can’t count the number of times where I was just a touch too slow to draw and ended up losing a life.

It wouldn’t be Arkanoid with power-ups, of course, and Drawkanoid has plenty. Only, they work a bit differently. Instead of being random drops from broken blocks, you select up to three abilities that charge up over time and can be activated at will once they appear on the board. These abilities range from earning extra lives at regular intervals and increasing the size of the paddle to allowing the ball to break through multiple blocks at a time or drawing a path for the ball to follow. These power-ups are bought between games using the gold you acquire during play and can be swapped out between sessions, along with some passive upgrades that are permanently active. My favorite combo was the pierce ability matched with magnetization, which allowed the ball to be drawn toward any nearby blocks and break through a bunch of them at once, clearing the screen in no time at all.

Watching a stage be cleared with a single shot is endlessly satisfying, but it also demonstrates just how different Drawkanoid ultimately is. Regular ol’ Arkanoid is pretty much as simple as it gets: just break blocks until there’s no more to break. In Drawkanoid, there’s emphasis on combos, the game subtly challenging you to try and shatter as many blocks as possible before the ball bounces off the paddle again instead of merely clearing the level. Which, when viewed that way, turns it from simply being a fun spin on an old arcade game to something very much its own. When I first started playing, I was more or less just trying to break each brick one at a time. It wasn’t until I first ended up destroying a good portion of the blocks by chance and saw the resulting replay afterward that I began to see the real appeal of Drawkanoid and where everything subsequently clicked.

Apart from the main mode, where you try to clear as many levels as you can before you run out of lives, there’s also a timed mode where you’re racing against the clock to clear levels, and a zen mode where the music is more relaxed and the levels less intense (and the rewards less gainful). They both don’t alter the game in any real significant way, but they do offer a nice change of pace from the main mode.

However you decide to play, Drawkanoid is a blast. QFC Design’s particular spin on Arkanoid is fun as it is refreshing, its changes just enough to make it into its own thing but drastic enough to the point where it’s no longer Arkanoid.