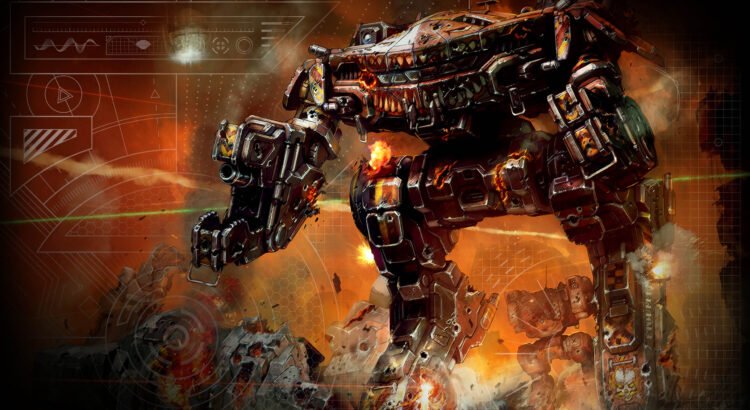 It has somehow been almost 20 years since the last single player Mechwarrior game. Mechwarrior 4 was released back in November 2000, while the standalone expansion (also called Mechwarrior 4: Mercenaries) was released in 2002. In the two decades since that time the battlemech genre has seen relatively slim pickings. BattleTech was released in 2018, but was a turn-based RTS rather than a real-time mech combat title. Mechwarrior Online in 2013 had promise, but was hamstrung by being a free-to-play multiplayer game and thus stuffed full of microtransactions. Thankfully, Mechwarrior 5: Mercenaries very much returns to the roots of the franchise, presenting a fully-featured singleplayer experience.

Mechwarrior 5 is set in the BattleTech universe, in the year 3015. Humanity has expanded over the last millennium to conquer the stars, but along the way has fragmented into a group of warring factions vying for ultimate supremacy. There are no aliens in this future; mankind is seemingly the sole sentient species. Most conflicts are fought using huge bi-pedal mechs, many as tall as skyscrapers, which stomp over the landscape crushing all beneath them. In the singleplayer campaign you play as Commander Mason (perhaps a distant relative of the Red Faction: Guerrilla character?) who has been inducted into his father’s mercenary group. Unfortunately, shortly after the tutorial your father is shot to pieces by a group of bad guys in some cool red mechs, and your task going forward is to hunt them down by rebuilding your mercenary group, taking on missions for the different warring factions inside the Inner Sphere (the section of the Milky Way which humanity have taken control of). The plot definitely takes a backseat to the gameplay, but each mission features plenty of unique, good quality voice acting (including notably from Elias Toufexis, who most famously voices Adam Jensen in the newer Deus Ex games).

Mechwarrior 5 tries to split the difference between being a detailed mech simulator and being an accessible video game for a mass audience, and it is mostly successful in this endeavour. Controlling a mech is fairly complex and you can be moderately granular in managing systems if you want to. You can move the mech top half and legs independently, while also controlling speed, heat, weapons and targeting with separate systems. It’s going to take you a while to get a hang of it, but the freedom of movement and the light-micromanagement is something to be appreciated. You initially start off with smaller and lighter mechs before being introduced to more heavy variants as time progresses. While it is very satisfying to blow up buildings and scenery, the feedback when shooting enemies like tanks and other mechs is inconsistent, and it’s often difficult to tell if you’re doing serious damage or if you’re barely making a dent. You can do a lot of customization to make the mechs your own, including custom paint jobs and swapping out different weapons systems. All of these systems really make you invested in your battalion of mechs, which can look especially glorious when all deploying on a mission together.

Juggling finances is a major part of the secondary gameplay when you’re not conducting mech battles. You have to not only keep your mechs repaired and stocked with new equipment, but you need to keep your pilots paid and have enough money left over to jump between star systems. This can quickly become challenging if you are incurring heavy damage during missions or are jumping to new systems without planning your moves in advance. When taking on new missions you can negotiate for more favourable conditions with the mission giver, which will affect what payout you’ll receive at the end. For example, if you’re worried about your mechs getting damaged you can negotiate for insurance to cover part of the cost of repairs, or if you are feeling more confident, a higher overall payout. This negotiation is a good little mechanic and really helps make you feel like you’re running your own merc group.

Graphically Mechwarrior 5 is reasonably strong. It’s not the prettiest or most advanced game on offer, but the overall style and quality of the effects is impressive considering the very large size of the levels and how much action is happening on screen. Explosions are always fun to watch, as is the sight of your mech casually demolishing a building by stomping through it. There is some fairly egregious pop-in of some small plants and shrubs, and some of the lighting can look a bit flat and lifeless, but this can be mainly overlooked. There is a superb variety of environments and different planets, from cold snow-shrouded worlds to deserts and more lush locales. All of the mechs look splendid and there is a really impressive variety, even down to unique cockpit designs. On the downside, the loading screens a pretty longwinded even on a SSD, which I hope can be resolved with patches.

Mechwarrior 5: Mercenaries feels very much like a blast from the past. With its shredding guitar soundtrack, glorious explosions and tactical economy management, it takes many elements of older design while streamlining some others to give a less frustrating experience. Whether or not the hardcore mech audience will enjoy it remains to be seen, but in many ways it does exactly what it hoped to achieve, providing a solid and enjoyable singleplayer mech game. It’s not revolutionary and it doesn’t really advance the mech genre in many meaningful ways, but Mechwarrior 5 is certainly a welcome return to form for the venerable series.