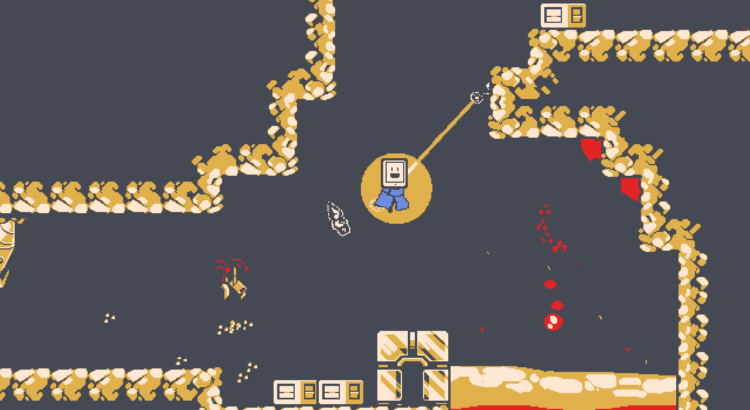 One of the keys to a successful metroidvania is making the world fun to navigate. Maybe you do that by making exploration itself interesting, a la Hollow Knight and how easily you could literally get lost in it. Or perhaps you try and make traversal itself engaging like in Ori and the Blind Forest so that you’re at least enjoying moving through the world as you inevitably begin backtracking across familiar ground. However each game decides to tackle it, if you can’t enjoy exploring and moving through the world, you’ve probably screwed up somewhere.

Kunai from TurtleBlaze understands this. In Kunai, you play a ninja/tablet named Tabby who gets around with the use of the two kunai they wield, allowing them to scale walls, swing across spikes or pitfalls, and more. It’s a metroidvania with a focus on acrobatics and it works beautifully.

Kunai is set in a world where, following an AI uprising, humans are more or less on the verge of extinction. Robots have replaced just about all life, as evident by the number of mechanical mice and insects roaming around. A small resistance group has been fighting back, trying to take down the opposing robots’ leader, but they’re ultimately outmatched. Thus they find Tabby and bring them online to help turn the tide in their favor.

The story is largely pretty standard post-apocalyptic fare for the most part. Its writing is pretty irreverent throughout, though, the game never afraid to cut through any tension with a joke or two to maintain its lighthearted tone. Tabby — who’s basically an iPad attached to a body — usually has a big smile on their face, almost always looking like they’re having a grand time amid all the chaos they sow. It’s a really silly game, all told.

And a really good feeling one, too. Kunai is a game that definitely gets what good game feel is, and it’s all the better for it. Moving through the world is a joy. Tabby’s array of abilities give them plenty of ways to maneuver through obstacles and generally get around with ease. Their two kunai can latch on to just about any surface, allowing them to scale walls or just swing around, while the dual SMGs they eventually obtain allow them to essentially fly through the air by constantly shooting downward. These, combined with the standard double-jump and dash abilities, provide a good range of ways to get around with no hassle.

What especially makes it work, however, is how easily you can just fly through areas. Latching your kunai into the ceiling and swinging yourself forward only to latch them again into a nearby wall before jumping off to latch onto another wall so you can bounce back and forth between them, steadily making your way upwards never gets old. Though Kunai is pretty light on platforming challenges, when they do appear, they frequently end up being some of the best parts of the game. Relatively late in the game, for instance, there’s an optional obstacle course you can run. First time I encountered it I didn’t yet have all of Tabby’s abilities so I wasn’t able to finish the course within the time limit. Even so, I’d gotten pretty good at moving around that I was still able to zoom through the course pretty easily. By the time I finally did get all of Tabby’s abilities and was able to run it properly, I was running through the course in one smooth motion.

Combat is just as good. Tabby starts off with only a katana that can restore their health with each kill, which is a heck of a boon given how much it makes individual enemies nothing more than a minor inconvenience. Take a bit of damage? A single kill can probably restore it most if not all of it instantly. The sword is what you primarily use to dispatch foes, though you also have few other side arms at your disposal. The aforementioned SMGs can take out enemies from afar, shuriken can stun them temporarily, and the rocket launcher… well, that one speaks for itself.

Combat starts off feeling pretty basic, with just about every early game encounter being a simple matter of rushing down your foes and getting one good strike in, but it doesn’t take long for things to start picking up. Once you start fighting armed adversaries, whether it be fellow sword wielders or simple gunners, combat becomes a bit more involved as you start having to figure out ways to open your opponent up or just wait for them to open fire to deflect their bullets back at them. Even then, individual enemies aren’t too much a threat, but they at least require a bit more thought to fight. It’s the bosses and the occasional arena that combat truly shines. The former for obvious reasons — each boss providing their own unique battles that make good use of your abilities and weapons, ensuring none of them ever feel dull — while the latter excels for pushing you to make the absolute most of everything you have available.

First time I stumbled into one of those areas, I had a heck of a time trying to survive. Where most encounters end up being pretty simple one-on-one affairs, these arenas pit you against a whole host of enemies, each successive round becoming more and more frantic as more types of opponents begin to appear and subsequently leave you with less room to breathe. Bullets and/or rockets constantly fill the screen while lesser foes march toward you to ensure you have little safe ground to tread. Teleporting or generally airborne adversaries taking turns trying to poke and prod while you chase them down. It all culminates in some truly wild fights. They’re good fun — much in the same way the more challenging platforming sections are — and it’s a bit of shame there aren’t more, but at the same time, it’s easy to see how they could easily become tiresome had they been more frequent.

Like Gato Roboto from last year, Kunai is a smaller, more contained metroidvania. It’s not sprawling like the Hollow Knights or Bloodstaineds of the world, making it less of a time commitment than its peers, which is by no means a bad thing. I wrapped up Kunai in about 7 hours, with most of the map filled out and a large portion of the secrets found. Considering how nice it is to play something short these days, Kunai‘s relatively quick runtime is appreciated.

For as big as its world ultimately is, however, it feels like it’s lacking in much reason to really poke around it. While there’s plenty of spots Kunai clearly signposts as places to return to when you have the right ability, the rewards are often small. Hats are fun discoveries, sure, and coins are always useful, but neither are terribly exciting. Heart pieces, a la Zelda, can be found on occasion as well, which are really the best reason to keep seeking out whatever secret alcoves or dead ends you can find. It’s a small thing in the grand scheme — even if the rewards weren’t always fulfilling, I still sought them out because I just like doing that — but it’s definitely something Kunai could have done better.

While there’s certainly no shortage of games in the metroidvania style, Kunai is definitely one worth making time for. It’s excellent sense of movement makes exploring its world a constant joy, its combat equally satisfying. Also, it’s not terribly long, which isn’t always the case with these sorts of games and is always a bonus.