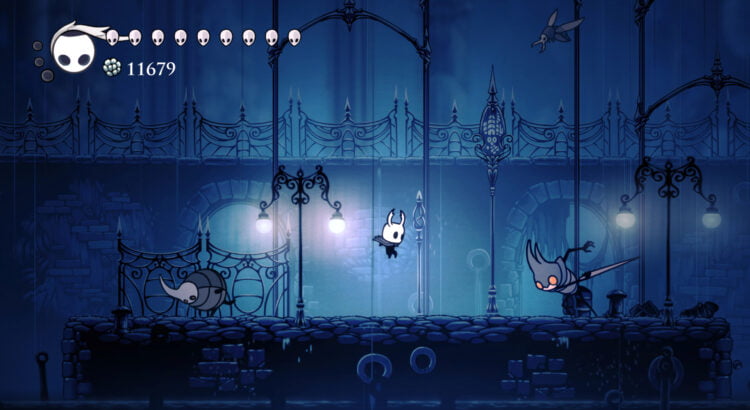 Of all the things Hollow Knight does well (a fascinating world, beautiful art, fantastic combat, etc.), discovery is by far its strongest quality. It follows the “metroidvania” style of map design and progression, and it’s one of the best executions of that formula I’ve seen in quite some time. The key lies in how Hollow Knight carefully decides which parts of its world to lock until you possess the right abilities or items and how it allows you to subvert those locks.

Typically, games like this guide you along a linear path. The world may be large and open, but the road you’ll travel is predetermined. Your progress is gated by a lack of abilities, forcing you to follow a very particular route that introduces you to each new skill before allowing you access to the next area. They present large, labyrinthine worlds but only use them to make the game seem bigger than it really is. It’s the same ol’ linear corridor we’re accustomed to, only in the guise of a winding maze with some trinkets hidden in its corners.

Some games are better at hiding that than others by giving you reasons to keep traversing the entirety of the world. The majority, however – or at least the ones I’ve played – tend to provide little to no reason to retread familiar ground. You’re always moving toward somewhere new, never looking back except when your map shows you missed some collectibles on your first pass. The game world looks vast and intricate when the map is fully filled out, but it’s wasted on how little time you spent in any one part of it.

Ori and the Blind Forest, for instance, one of my favorite metroidvanias in recent years, is a good example of this. Its world is large and beautiful, every scene exhibiting incredible attention to detail. But because you only really need to move through each section of the map once to see everything it has, you don’t spend much time immersed in it, and never have the chance to poke around see what secrets it holds. This type of game always seems to trade on exploration, but every time I play one, I’ve never found myself engaging in that aspect as much as I would like. I feel like I’m not exploring so much due to how much I’m guided by hand. The large spaces I’m presented with don’t offer much freedom to wander around and take it all in, instead forcing me to follow a prescribed path until the game decides I’ve gotten everything I need to get around, by which point there’s little else to do but press on.

Hollow Knight still follows some of these standard conventions, but the difference lies in how it gates certain parts of the world. Just about every zone can be accessed from multiple angles. Rarely are you ever truly locked out of an area. If you take the time to explore, you’re bound to find another way in. I often ended up stumbling into what could probably be considered late-game areas completely by chance because I decided to follow an out of the way side-road rather than continue down what was obviously the mainline path. And every time I did, I always had to stop and consider whether I should continue pressing forward or retreat for now and come back later. In part because I was afraid I wasn’t strong enough to handle what lie ahead, but mostly because I wasn’t sure which path would lead me forward.

Hollow Knight doesn’t give much guidance. What little it does provide amounts to little more than vague hints and allusions toward regions you’ve yet to encounter. It ensured that I always felt lost, never quite knowing whether I was on the right track. Every time I thought I was making forward progress, I’d end up reaching a dead end. And every time I was merely wandering around, checking out pathways I had previously missed, I always ended up finding more than I bargained for: a new area, a hidden boss, an NPC to chat with. I seldom had map markers to follow or leads to investigate. All I had was my own curiosity and whatever paths my map said I hadn’t explored yet.

For instance: roughly half-way through I found a tram pass in a place called the Deepnest, a series of dark, winding caverns filled with all manner of nasties. Having seen one such tram on the east side of this very area, I decided to go and see where it would take me. It led me to two different stops: the Ancient Basin, a monochromatic zone that housed the ruins of an ornate palace, and the Edge of the Kingdom, which took me outside the underground complex I’d been venturing through and into the wintry landscape outside. Taking just a few steps into both of them led me to believe I shouldn’t be in either of these places yet. Between the bigger, tougher foes and the general atmosphere they gave off, I felt like I skipped ahead. I probably could have gotten pretty far into each of them with some persistence, but I didn’t want to risk it. Not when the Deepnest was already giving me enough trouble already. That such a thing is possible speaks volumes about Hollow Knight‘s trust in your ability to find your way, how comfortable it is with letting you get lost and see what happens.

It embodies the sort of excitement and mystery I’ve wanted out of these games for ages, where the intricate nature of the world actually matters and I’m encouraged to wander. That I’m never really sure where I’m going, never sure what I’m doing is exciting. Games seldom feel confident to let you loose without some kind of direction, something to ensure you can always find your way back onto the mainline path. Hollow Knight is content to leave you to wander its winding caverns at your own pace, finding points of interest as you go and it’s all the better for it.