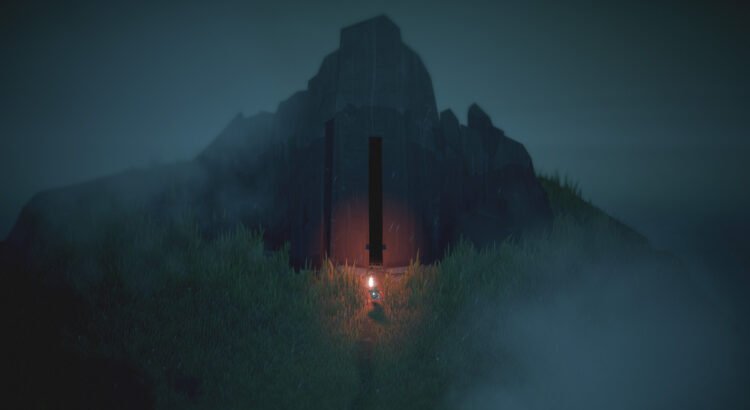 Have you ever had one of those experiences where a game you thought for sure you would enjoy because it looks extremely like your kind of thing ended up not quite working for you? Last time I recall that happened to me was with Below. On paper, everything about it seemed like something I’d be into. But it just didn’t click due to some frustrating design decisions.

Below, which just launched on PS4 this week, has since rectified that with the introduction of its new “explore mode.” Here, the game does away with all the survival mechanics and generally makes the game less punishing in an attempt to make Below more approachable. And it does! Not by a huge margin – it’s still very much the same game at its core – but a fair amount all the same.

Below sees you exploring the depths of a mysterious island. You drift ashore as one of many nameless explorers who plunge deeper and deeper into the island to uncover its secrets. I tried Below back when it launched at the end of 2018. I dug a lot about it – the tone and atmosphere especially – but I didn’t get very far. That was primarily due to the survival mechanics and how they manifested. Having to worry about hunger and thirst on top of trying to manage what little resources I could gather wasn’t really my thing. Under the right circumstances, I could have probably powered through. But Below – at least how I remember it – was particularly brutal.

Every time you die, you take control of a new character. All the supplies your old character had can still be retrieved off their corpse if you can get back to it. If you die again before you can do that, all those items are lost permanently. That happened to me several times. I’m pretty sure I eventually ended up in a situation where I was basically unable to grab more food or any materials to craft torches, arrows, or other essentials because I’d already taken what was available to me in my previous attempts, more or less rendering progress seemingly impossible since I didn’t have what I needed to make a run to retrieve my lantern so I could properly move forward again before succumbing to either hunger or thirst or just plain being killed by some unseen trap. It made an already difficult game downright mean.

Point is, I bounced off it pretty hard. With the addition the explore mode, however, all that is no longer a problem. Hunger and thirst are no longer concerns, meaning you don’t have to have to constantly be saving inventory space for food and drink. Checkpoints, which previously reset upon death, are now persistent, allowing you to easily get back on track with less risk of dying long before you reach your corpse. There’s some other changes as well, but those are the big ones.

(Quick aside: if anyone still wanted to play Below with all the survival mechanics still in place, they now exist under the “survival mode” option on the menu.)

As such, Below isn’t nearly as punishing as it was before. Though progress has still been slow (mostly due to a lot of foolish mistakes on my part), it doesn’t feel insurmountable anymore. Death is no longer a huge demotivator since checkpoints are now persistent, thus making it little more than an inconvenience than a massive loss of time and investment. With food and water no longer being a concern, exploring is less stressful now that I’m not constantly worrying about how far I can stretch what I have or when I’ll find more supplies I can gather to keep myself going until I find the next campfire. When I first played, I didn’t make it very far into the first area. Now I’m actually making good progress, having made it a decent way into the second zone (an icy cavern area).

Even with Explore Mode’s modifications, Below is still very much Below. It’s still a hard, obtuse game. It’s still not very open to telling you what’s what mechanically, forcing you to piece things together on your own through sheer experimentation and a bit of trial and error. It’s still a slow game that requires a lot of patience. If you bounced off it before because of that, Below’s new mode isn’t likely to change your mind. If you bounced off for other reasons, though, you might try the explore mode and see if it clicks with you.