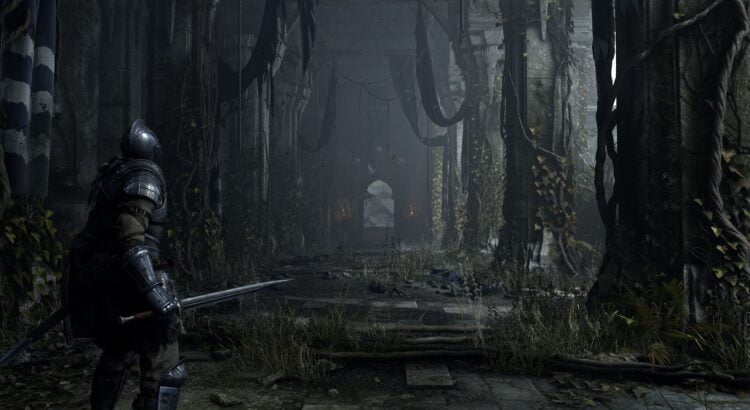 A couple weeks ago, Sony announced that a remake of Demon’s Souls, the game that put From Software on the map, is being remade by Sony’s Japan Studio and Bluepoint Games, the team behind the Shadow of the Colossus remake from a couple years ago, as part of their big PlayStation 5 showcase. It’s been rumored for some time now, but seeing it be properly announced? Exciting! Being able to once again play Demon’s Souls as it was intended – with all the online features enabled – is an appealing prospect now that the original’s been offline for a couple years now. It’s a good opportunity for more people to discover where the Souls series got its start and see what a strange, fascinating game it is. But at the same time, I wish they would just port the original and bring it back online as well.

Demon’s Souls is a weird game. It’s clunky, esoteric, a bit janky, very unbalanced, and truly infuriating in some spots (losing half your total health while in soul form sucks). But it’s also an incredible game and groundbreaking for its time largely for its online features. It’s a rough game in many ways, one that lacks the sort of polish people expect from most big-budget games let alone From Software’s more recent works, but that’s part of the charm. It’s a game that probably should have only ever garnered a cult following but instead became a huge hit.

A remake stands to change that. By how much, who can say. But it’s certain to be a different game on the whole. That’s how remakes work after all. The new visual treatment will assuredly change the feel and atmosphere of each locale as demonstrated by some of the comparison shots flying around Twitter, whether for better or worse differs from person to person: I’m on the side that it’s definitely losing something, as the original had a look to it which helped greatly in establishing its identity. The understated score of the original might be replaced by more traditional orchestral arrangements like recent Souls games have. Some of the more annoying but intentional aspects such as encumbrance and no renewable healing sources — you only had limited use healing items in Demon’s Souls — could very well be changed too.

As much as I would love them to just keep everything intact – like how ridiculously overpowered magic is or how bullshit the scraping spear, a weapon that eats through your equipment’s durability on each hit with alarming speed, is as a concept – it’s likely that stuff will be removed to smooth out those rough edges. I’d like to think it won’t – and Bluepoint’s work on the Shadow of the Colossus remake suggests they’ll probably avoid any major gameplay changes – but anything goes. And that’s fine! Not much point in doing a full remake if some things aren’t changing. It’s part of what makes remakes fascinating. They’re a chance to reexamine and alter parts of a work or reinterpret it entirely. But again, it makes me wish the original would be brought back online too.

Videogames have a terrible track record when it comes to preservation. For as much as ports and remasters of older games have become common over the past decade, there’s still literal tons of games that remain inaccessible or entirely unplayable due to any number of reasons. Lost source code, copyright entanglements or licensing issues – you name it. Remakes are one way to combat that, in specific cases, but even those that do nothing more than slap a new coat of paint over the original games are still effectively replacements for the older versions rather than proper archival efforts because they’re still technically a new interpretation of the work.

ROMs then are still our best bet at seeing games in their original form in a (mostly) easily accessible way. But the legal grey area means they’re always one threat of lawsuit away from disappearing. PS3 emulation has been coming along nicely, and some people are even setting up private servers for Demon’s Souls so that it may still live on, but there’s nothing to suggest those projects can’t be easily shut down should Sony suddenly decide to do so. In such an event, the only way to play the original would be to track down a PS3 and a copy of the game, which is a big ask just to play one game. Obviously full backward compatibility would be an easy solution, but that’s a whole other matter entirely with its own set of challenges.

In an ideal world, a remake of a game would always be accompanied by a port of the original so as to allow the two to exist in conversation with each other, to see how both differ and why. Final Fantasy VII is able to do this because the original game has been ported to all manner of platforms, allowing it to act as a good companion piece to Remake (or vice versa). Granted, Final Fantasy VII Remake is a unique case since it is a very referential, metatextual work that assumes some level of familiarity with the source material, but still. It’s not hard to see how the conversations around it would have been different had the original game not been widely available.

Remakes are always at their best when the originals can exist alongside them. While the PS3 version of Demon’s Souls isn’t in any danger of vanishing yet, that we have a remake coming without any signs of the original being preserved in any official capacity is disappointing. With the PS3 out of production since 2017, it’s hard to say how long PS3 games will still be listed on the PlayStation Store. Once that happens, it’ll be a lot harder to obtain outside of ROMs or trying the PlayStation Now version if you’re lucky enough to have really, really good internet speeds (provided it isn’t de-listed there or the service itself suddenly shuts down one day). Given how much of an impact Demon’s Souls made, it being properly preserved is the least it deserves.