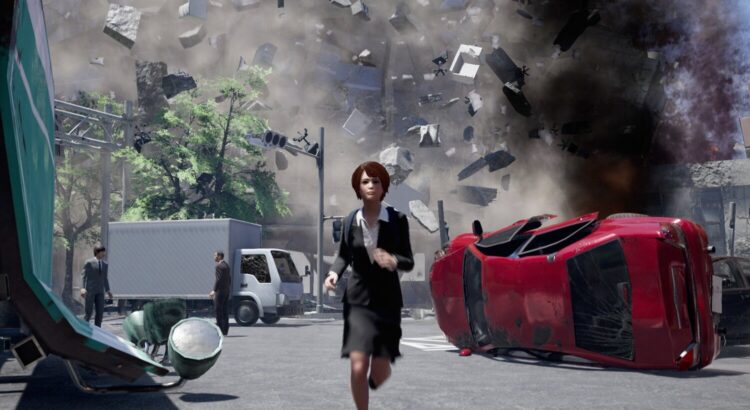 Disaster Report 4: Summer Memories is clunky, broken and buggy. The framerate regularly struggles to stay in the high 20s. It’s ugly, with small, bland environments and some occasionally finicky controls. And yet despite all this, Disaster Report 4 is remarkably engaging, using a variety of small scale stories and encounters put together against the backdrop of a cataclysmic earthquake. Disaster Report 4 might be technically lacking in a lot of areas, but it is stuffed full of heart.

Disaster Report 4 has had a long history. It originally began development back in 2010 as a PS3 game before it was cancelled after the horrific 2011 Tōhoku earthquake and tsunami. Eventually it found a new publisher and was released in Japan in 2018, before getting a worldwide release this year on PC, Switch and PS4. Fundamentally, this feels like a last-gen game in all respects, and you certainly won’t get any kind of impressive graphical fidelity here. What you do get though is a genuinely fascinating attempt to put you into a realistically grounded disaster scenario, which lets you imagine how you might react.

The story of Disaster Report 4 is for the most part constructed by you. The main setup is that you are a visitor to the city, on your way to a job interview or meeting when a huge earthquake strikes. From there, your main objective is to make you way out of the city and get back home, helping or hindering people along the way. You’re regularly given choices about how to respond to a situation, from the actively helpful and selfless to the cruel or selfish. These choices will change your story in many subtle ways, even if the main direction of what’s happening doesn’t. During your journey across the destroyed city, you’ll meet a wide cast of characters; a concerned teacher looking for her pupils, a brash businessman worried about his stock value, a trapped lady whom you can rescue from the collapsed subway. These vignettes aren’t necessarily great stories individually, but taken as a whole they represent interesting little slice-of-life dramas set against the disaster backdrop.

Gameplay itself is fairly basic. You can move your character around small areas of the destroyed city, interacting with characters and taking predetermined paths to new areas. Usually when you approach something story-critical a cutscene will trigger, meaning you’re unlikely to miss anything important. You need to manage your character’s health, stress and bladder, but all of these are fairly easy to juggle given you can recover health at save points. When walking around you’ll regularly encounter earthquake aftershocks that can change the world by destroying buildings and can cause your character to fall over, meaning you’ll want to hit the deck and start crawling when aftershocks occur. Occasionally buildings can crush you, but thankfully the autosaves seem aware that this can happen and normally reset you immediately before disaster struck. You can also collect a variety of different items scattered around, including amassing a remarkable collection of compasses.

Graphically I can’t really say that much in the game’s favour other than the characters look alright with a nice selection of hairstyles; the world is sadly very small and bland with lots of repeating buildings and generic background NPCs. Most characters don’t move with only a few who walk pre-defined loops. It never feels like a real city, more a kind of disaster film studio backlot. Similarly, on a technical level the game is a mess, with a lurching, unstable framerate that never manages to consistently hit 30fps, as well as occasional glitches like getting stuck on geometry. Thankfully the Japanese voice acting is great throughout, and coupled with some good subtitling means you still get a full understanding of the story. There’s very little music, but what’s there is perfectly serviceable.

Disaster Report 4: Summer Memories isn’t the kind of game that’s ever going to have mass appeal. It’s extremely story heavy, and its various technical shortcomings mean that you really have to care about seeing your character through the ruined city in order to get anything major out of it. But if you do get invested in the trials and tribulations of the various people you encounter, you’ve left with something quite unique; a story-driven disaster where you’re the protagonist. Just accept you’re never going to be Charlton Heston.