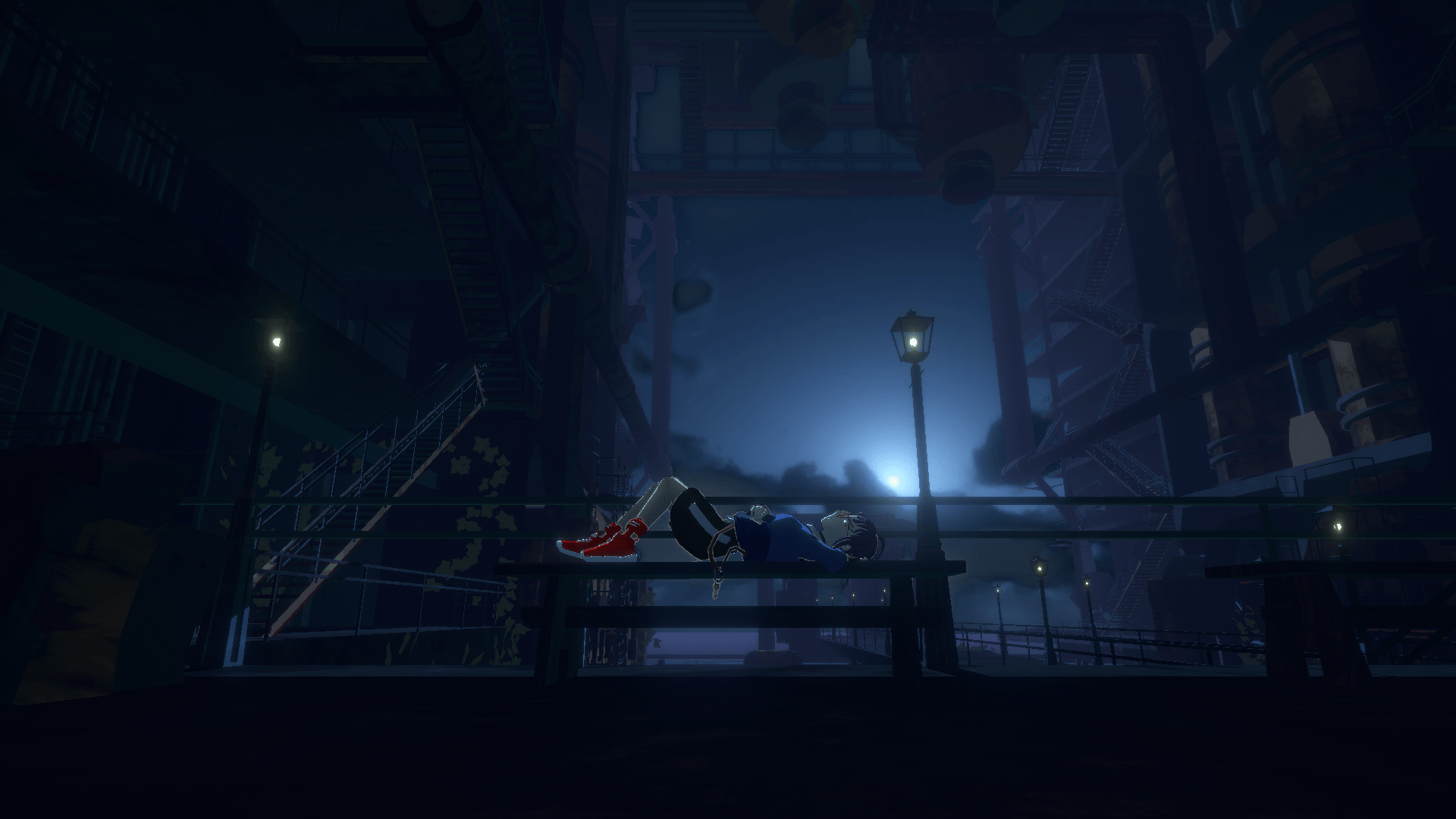 If you were able to spend 24 hours after dying hanging around the world of the living a little longer, what would you do? Especially knowing you had a fair number of restrictions. Try and make contact with friends and family (or at least observe them)? Spend the entire time contemplating the nature of life, death, and our place in the universe? Relax, take it easy, and get one last good drink in, maybe?

Necrobarista is a visual novel that plays with that premise. it tells the story of a peculiar café called The Terminal. On the surface, It’s a regular ol’ café. Nothing special about it – except for the fact that it’s a sort of between point between our world and the afterlife. The Terminal is a place where the dead and the living can mingle, able to maintain some sort of connection to the world of living however brief it may be. In the case of The Terminal, dead patrons only get 24 hours to hang around before they have to go. How they spend those hours is up to them, but as long as they remain in the vicinity of The Terminal, they can maintain some semblance of life.

The game follows a few characters in particular: Maddy, the current owner of the café and budding necromancer on the side; Chay, the previous owner and Maddy’s former boss; Ashley, a young inventor who hangs around the café pretty much all the time; Kishan, someone who’s just died at the start of the game and is struggling to come to terms with their situation; and Ned, an agent for the death council (an org responsible for maintaining balance between the worlds of the dead and the living) who often comes around on business and an old friend of Chay. There are others – patrons who are depicted both on screen and off – who have their own stories as well, but the focus lies on the core cast.

The core story is one about death and moving on, each of the characters’ own arcs intersecting with those themes in different ways. Of them, Kishan is the one who deals most directly with them for the majority of the game. His constant struggle to accept his new reality and how to proceed is certainly understandable. His choices are to either try and stick around, trying to sustain some form of life by obtaining more time to maintain his current form, or accept his fate and move on. Hard to see how anyone could quickly accept their own death, especially when you can still hold onto some form of it for a bit longer. A day isn’t that much time in the grand scheme. Trying to come to terms with your life suddenly being over and no longer being able to see everyone you know and love in 24 hours would be difficult for anyone.

People come and go through the café all the time, and Kishan’s not the first dead person to struggle with their situation. Everyone who works at The Terminal sees people like him come and go all the time. They all try not to get too attached, as such, as every patron like Kishan will inevitably move onto whatever’s next, no matter how much they might want them to stay.

Doing so has consequences, though. Maddy – or the café, rather – is deep in debt. Not the monetary sort – though money is very much an issue too – but a time debt, rather. Though the café has a strict rule about only letting the dead hang around for 24 hours, they’re pretty lenient about enforcing that rule, often letting the newly departed hang around longer than they should. That has the problem of upsetting the balance of life. Life and death are very particular. For someone to stay alive after death, they eventually need to get more time from somewhere (usually taken from the living by force if they’re really dedicated to subverting death) lest they begin to fade. Otherwise they’re existence becomes increasingly more uncomfortable. As a result of not enforcing those rules harder, she’s racked up a huge debt that the death council expects her to repay – something Ned’s frequent visits serve as a constant reminder of.

It’s a constant tension throughout the game. Maddy and Chay frequently argue about needing to address it somehow, neither seemingly having much of in the way of ideas of how to do so. They could use some necromancy to try and gain hours from folks willing to put them on the line (like, say, through some underground gambling), but the ethics of it are questionable at best. Debt is hard to escape from. Once it starts piling up, it has a tendency to keep growing. No matter how hard you try, even if you do make progress, it never quite seems like you can make much of a dent if at all. Once you’re in deep enough, it becomes inescapable, makes you desperate. Monetary debt is already a nightmare; how, then, does one escape a time debt? How you even begin to repay the hours you owe for letting the dead stick around longer than they should? What’s the cost for not making good on it? Necrobarista doesn’t dwell on the specifics of that, instead content to leave the looming threat stand on its own.

For as heavy as Necrobarista ultimately is in the moment to moment play, it’s able to easily jump between the serious and the lighthearted. The characters feel naturally dispositioned to make light of stuff what with their wry sense of humor and the silly antics that sometimes arise from them still managing a café amid everything else. For every heart to heart talk about death and afterlife and what it all ultimately means, there’s plenty of fun banter between everyone. They’re a fun cast of characters to follow. Doesn’t matter what’s going on at any given moment; seeing them all interact is simply a delight.

As far as visual novels go, Necrobarista is very linear. You don’t have any say over any of the characters’ actions, so there’s no sort of dialog options or branching paths or anything like that. You’re not an active presence in the world, merely an observer watching these events unfold. Between chapters, however, the game swaps to a first-person view as you’re able to walk around the café. Here you can explore the area to its fullest and unlock memories – vignettes of various moments and events from various points in the café’s history.

Unlike the rest of the game, these are presented purely in text form. Memories follow both the main cast and other unseen characters, each one telling a small story about some small event. A couple of patrons engaging in a (fake) knife fight downstairs, a chance encounter between a couple of pro billiards players, excerpts from books or e-mails or journals, maybe some additional lore about the world, or snapshots from any of the main characters’ lives – the memories contained in The Terminal are varied and always fascinating.

Which ones you can pursue are dictated by which words you latch onto at the end of each chapter. First time you see the highlighted words, you might think they have some sort of special significance – something to justify needing to elaborate on their meaning – but no: they’re just extra flavor, maybe some clarifying details about a character, or a quick joke even. They have particular associations, however – whether to a particular character or concept – that becomes a sort of currency you can use to unlock memories. Each memory requires three different concepts. One might ask for “magic,” “lore,” and “food,” while another may ask for “Melbourne,” “guest,” and “Chay.”

The game doesn’t tell you ahead of time what words have what associations (though you can guess if you’re paying close attention to who’s speaking those words and think hard enough about what associations they might have), meaning it’s easy to end up in a spot where you can’t unlock any memories during any of the between chapter interludes. That happened to me the first time I encountered them. Happened to choose words that didn’t meet any of the combinations available. Just took the game’s advice and chose those that stuck out to me. Unfortunate, but what can you do. Was far more conscious of what I chose after that.

Necrobarista might be a bit different from your average visual novel in terms of what you do, asking you instead to just sit back and watch rather than be an active participant in the story, but that’s hardly a negative – both on the whole and for Necrobarista in particular. Games can take many forms, and interactivity means more than just “inputs” or exerting some kind of influence. Sometimes it just refers to the give and take of stories in general: of what we take away from them and what meanings we give to them. And with a story as strong as this one, I’m more than content to just sit back and watch it unfold.