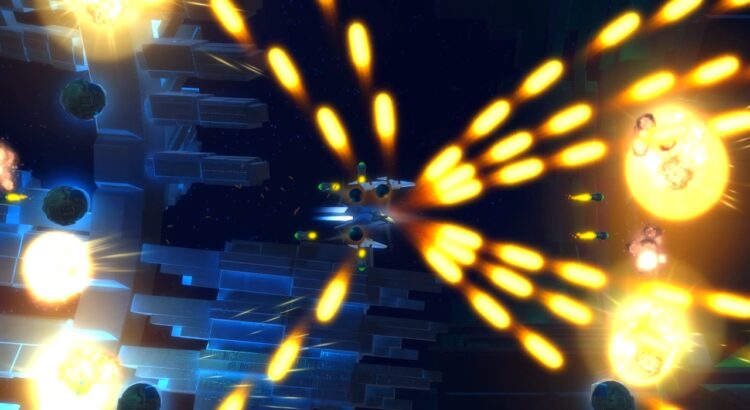 Chances are you when you hear about shoot-‘em-ups, you think of the bullet hell variety. Constant hails of gunfire filling the screen, leaving hardly any room to breathe. Rigid Force Redux isn’t nearly as intense, instead allowing you to easily decimate everything in your path and focus on trying to maximize your score. It’s a comparatively more relaxed style of shooter. Challenging, but not as daunting as some of its peers.

Rigid Force Redux is akin to games like Gradius – a side-scrolling shooter where you’re as much navigating environmental obstacles as you are volleys of bullets and other deadly projectiles. Instead of the constant hails of bullets from a bullet hell style game, Rigid Force is more restrained. Enemies approach in groups that are easily dispatched with the right positioning and firepower, the environment itself being more of a threat in most cases. If anything, you’re the one creating bullet hell for your adversaries.

As you move through each stage, you pick upgrades that alter your firepower into one of three types: a straight line of lasers, a spread-shot with very wide range, or a bunch of green arrows that bounce all over the screen. Their differences are small – damage-wise, they’re all extremely effective – each one having their own obvious use cases. Rigid Force doles out each one where they make the most sense (lasers for when you want heavy direct damage, spread-shot for open spaces where you need to hit multiple targets, and the arrows for any kind of tight winding spaces or just difficult to hit targets), occasionally letting you choose which of them you want to use.

On your own, any one of these upgrades gives you a big advantage. Larger foes go down almost instantly once you have better firepower. But the aid of the sentries you can obtain as well, you become basically unstoppable. Their presence basically adds four additional guns onto your ship, boosting your damage even further. You can also change their formation to cover more ground. Have them spread out around your ship and you can hit a wider range of foes above and below you in addition to whatever’s directly ahead. Even better, you can direct the sentries to move behind your ship to attack anything approaching from the left side of the screen.

With so many bullets filling the field, your worry isn’t so much enemies as it is the level geometry. Every level constantly moves between open and enclosed spaces, the latter always making things harder due to how little room you have to move without risk of colliding into a wall or ceiling thus damaging or outright destroying your craft. On both easy and normal difficulties, your ship can take a hit or two before it expires, allowing you some measure of leeway if you happen to be clumsy like myself and accidentally ram into a ceiling or two occasionally.

The bigger challenge comes from the game’s bosses. Here the game tests your ability to maneuver as just about every boss requires you to stay on the move. It’s in these moments that Rigid Force becomes closer to the bullet hell style of shooters insofar as they require you to carefully navigate waves of gunfire with little room to breathe. The game does alleviate some of that by letting you cut through them at the cost of some energy, a la Graceful Explosion Machine that had something similar, which definitely helps make things more manageable when you’re trying to dodge bullets and other obstacles simultaneously.

Rigid Force Redux’s six stages can be finished pretty quickly if you know what you’re doing, but as with any game like this, finishing the isn’t so much the end as it is the beginning. These games are built around replaying them – or at least specific levels – over and over again to improve your score. The first run is basically a matter of feeling things out and getting familiar with the rhythms of each stage. After that it’s very much a matter of replaying the same levels, the same sections over and over again trying to figure out how best to maximize your score, where you can optimize your runs to do better than last time. It’s a kind of problem solving in a sense. It’s also kinda chill, actually.

With each new playthrough of either the whole game or an individual level, you start to internalize more and more the game’s pace and rhythm to the point where you’re not so much actively thinking about what you’re doing and just acting on raw instinct. Okay, at this point I have to be here so I can attack the enemies that will spawn there; grab this power up when it appears here so I can handle that thing there – that sort of thing. The sort of play that becomes almost subconscious because of how familiar it becomes.

There’s something appealing about that mode of play sometimes. The sort of thing you can just throw on and engage with without having to think too hard about it. Been a while since I last played any sort of shooters like this and Rigid Force Redux, if nothing else, was a good reminder of how enjoyable they can be.