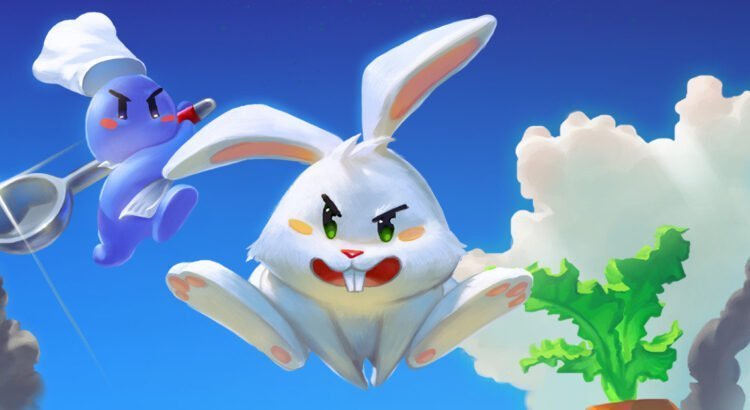 Beatrix Potter would probably be rolling over in her grave if it wasn’t stuffed with rabbit corpses. That Mr. McGregor was a real bastard, making rabbits into pies. You know who else is a real piece of work? The evil Rabbit Queen. Seems her tasteless, moldy veggies were becoming tiresome.  Growing jealous of the legendary Space Chefs, who serve their delicacies in an infamous space diner, she orders her evil rabbit henchmen to ransack the diner and kidnap the chefs, so she can enjoy a good meal.

But fear not, for all is not lost.  You play as humble space diner cleaning boy – slash – reluctant hero, who, armed only with his trusty wooden spoon (you pry it out of a large treasure chest at the outset of the game) sets out to defeat the evil Rabbit Queen, rescue the Space Chefs, and return the diner to its once former glory.  Easy peasy, rabbit sneezy!

You accomplish this overwhelming sounding task by proceeding through stages of increasing difficulty.  Each stage contains a number of rabbit henchmen that you need to dispose of, but in true rabbit custom, just knocking them off the stage or blowing them up won’t do at all.  You need to knock them into judiciously placed piping hot bowls of stew, which will then shoot off the screen, to hopefully be gobbled up by some unseen force.

Each stage contains bumpers, blocks and other obstacles, and swatting a rabbit with your spoon usually sends them flying in the opposite direction, bouncing off bumpers and shattering wooden blocks on their way to that soup bowl which may be some distance away.

Early levels ease you into the puzzles with simple, straightforward rabbit smacking and easily visible bowls of stew close by.  The puzzles rise in difficulty incrementally, however, as do your abilities.  Defeating Radical Rabbit Stew’s first boss awards you with a significant upgrade, a silver spoon (forged from organic rabbit tears, naturally).  This spoon lets you smack larger rabbits around, as well as smack rabbits from a distance.  Later upgrades include a spoon with a hand on the end that functions like a hookshot, allowing you to cross wide gaps.

You’ll need all of these upgrades too, since as a simple cleaning boy, one hit from any of these evil rabbits will end your illustrious career, however, you will find additional hearts along the way that will significantly increase your survivability.  Many stages also contain collectible blue coins, but getting them typically involves luring rabbits into an out of the way location in each level.

Radical Rabbit Stew‘s fifteen to twenty stages in each level, capped by a suitably annoying end of level boss.  Defeating the boss rewards you with access to the next level and set of stages, with each level boasting a different theme.  Your early travels will take you across grasslands and island archipelagos but later levels will have you navigating icy snow capped peaks cold enough to freeze your bunny butt off.

There’s also a hardcore mode in Radical Rabbit Stew, which is basically the main game minus any heart upgrades.  A versus mode is here as well and lets you compete against other aspiring heroes to see who can smack the most bunnies into soup bowls.  Rounding out the package is a stage editor, which although simplistic, lets you recreate any stage in the game, complete with level-specific map tiles, bowls of stew, enemies, bumpers, etc.  Interestingly, you can also place upgraded spoons on the map, as well as load up your well crafted puzzle stages in versus mode, for fellow bunnies and humans alike to play.

Serving up piping hot bowls of Radical Rabbit Stew can be a charming and endearing, if often frantic affair.  Whether you’re battling screen filling, rump shaking bunnies with a penchant for repeated hopping, or sliding around frozen tundras, knocking smaller rabbits into snowy drifts, your career as a cleaning boy will be a memorable one, to say the least.