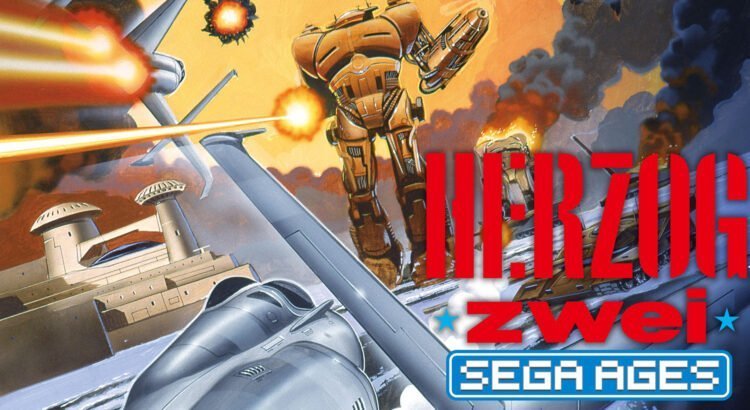 It’s a shame that Sega Ages is going away since it was a really incredible repository of classic games, but man, what a way to go by making Herzog Zwei its last entry. The grand-daddy of the modern RTS, it might feel archaic and difficult to learn, but it’s still surprisingly playful, even more so thanks to the touches that AM2 went about and beyond implementing to the game.

To those unfamiliar with Herzog Zwei, it was released very early into the Sega Genesis/Mega Drive lifecycle and helped pave the way to what eventually would be the popularization of the real-time strategy genre in the 1990s with classics such as Dune, WarCraft, Command and Conquer, and most importantly, StarCraft. None of those would exist as they eventually were if it weren’t for a game full of quirks as this is.

Due to the graphical and processing limitations of the Genesis, especially that soon after its release, not to mention how far ahead of the curve when it came to its fundamental mechanics as it were back in 1989, Herzog Zwei plays somewhat differently than what you’d expect out of a RTS. As the army commander of one of two warring nations, you control a ship that has the capability to transform into a walking mech a la the many mecha anime from that era, but you don’t attack the enemy directly as you fly around a very limited in view scrolling screen.

Instead, you enlist the help of a handful of different units in order to do the bulk of the fighting for you, as well as take over the many outposts strewn across the map. Conquest is an important part of Herzog Zwei since your ship can only travel so far before it runs out of energy and blows up, so leapfrogging from post to post is the only way to get any close to the enemy’s stronghold.

After having a decent number of units and structures on your side, you can move against the opposition, but not before defending your own forces with a smart mix of units taking into account their pros and cons. The weakest of them, the infantry, is the only one that can take over outposts, so you have to keep them alive at any cost until they do so, and in order to do that, you have to mind where the enemy might sweep in and place defenses in a smart formation.

Then there’s whether or not these forces will be ground-based or worse, come in via air, forcing you to invest in purely defensive units such as SAMs which are defenseless against tanks or even infantry. On the other hand, they’re absolutely essential in putting the hurt on the opposing commander’s ship, which is just as or even more capable than your own when it comes to combat.

All of these preparations have to be done manually as there’s almost no way to automate production. Each unit has to be created individually, and what might shock any modern RTS player, they also have to be programmed one by one with the behavior you want them to take when deployed. Need them to stand their ground and defend a position instead of chasing down attackers, or charge headlong into the other faction’s base as soon as you plop them down? There are specific commands for each of those and they cost you resources whenever you switch them, aside from the funds needed to buy them.

You read right when I mentioned their placement. As with other micromanagement aspects of Herzog Zwei, placing units on the map is also done individually and manually by having your ship zip over each of them and flying wherever they are needed since there’s no cursor other than yourself to order your army anywhere. While this might sound boring and very slow — well, the latter is true when just starting out, to be frank — it shows just how far ahead the developers of the game were back in the late 1980s when coming up with these concepts.

Just think of the state of console games back in 1989 and how pretty much most of them were relegated to being mostly home conversion of arcade shooters and platformers. Herzog Zwei gave players a taste of what PC users had been dipping into a few years ahead of console owners with more strategically complex titles and tabletop simulations. And yeah, while today many parts of this game will certainly feel Jurassic to anyone first checking it out, the fundamentals are there to be enjoyed and still work brilliantly if you’re patient enough to sit down and learn Herzog Zwei.

And in that AM2 has done a brilliant job, even more than their usual effort in the Sega Ages collection. Herzog Zwei features a brand new fully-featured interactive tutorial that eases you into the admittedly difficult (and a tad intimidating) to get into gameplay mechanics of the game by dealing a good dose of 4th wall breaking humor that’s full to the brim with references to Sega’s history and catalog. There’s a lot of cuteness all throughout thanks to the very cartoony lecturer. I couldn’t help but play through the entirety of these lessons with a huge grin on my face thanks to the very well written lines that she delivers with her simple yet very lovely expressions and prop-heavy comedic style.

Aside from that, the Sega Ages version of Herzog Zwei comes packed with the usual options that you’d come to expect from previous entries in the collection. You can pick from a number of graphical and control options, including a border that helps you keep track of obtuse order codes, not to mention the ability to save your scores to online leaderboards based on the single player portion of the game, which you can play with or without a helper that acts as a navigator of sorts to the many motions that there are in playing a match of Herzog. Online multiplayer is also a go here, and it’s got the potential to be extremely fun if you can get a like-minded person to play against you.

Say what you will about playing a very old game that wears its age like Herzog Zwei nowadays, it’s not shy about its many quirks and limitations. It’s an 1989 game through and through, with a lot of effort that’s gone behind its release in this compilation in order to help you learn how to play it. And getting into it is well worth the trouble since it’s still very balanced — the two factions play the same and have the exact equal resources and abilities — leaving it to you to learn and master its gameplay through sheer experience.

I’m very sad about Sega cutting the Ages collection short, but damn, they couldn’t have picked a better game to send it off on than Herzog Zwei. This is the perfect way of getting an entirely new group of people to enjoy it who probably weren’t even alive when it came out, let alone know of its existence and historical importance to videogames as a whole.

Even if you don’t fall in love with how it plays, it’s well worth having this gem along with the rest of the Sega Ages collection loaded up into your Switch. Just so you remember that gaming genres weren’t just created out of thin air: they have evolved into what they are now and aren’t set in stone in any way. Who knows what we’re playing today that could turn out to be a seminal game 30 years from now like Herzog Zwei most certainly is for 2020?