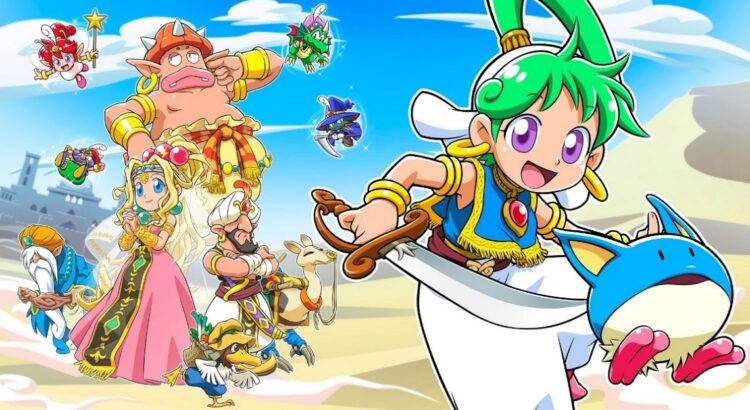 I’ll come out and admit that I have little experience playing any of the Wonder Boy games. Outside of jumping around and not getting much progress done in the NES version of Adventure Island — basically a reskin of Wonder Boy by Hudson Soft — as a six year old. I only came into contact with the series until much later, when the unabashedly gorgeous remake of 1989’s Master System entry Wonder Boy III, Wonder Boy: Dragon’s Trap by Lizarcube and dotEmu (the same folks behind last year’s Streets of Rage 4) in 2017.

Wonder Boy: Asha in Monster World is yet another remake but by an entirely different developer, Artdink, who up to this point I admit to having no knowledge of. Regardless of my ignorance, they have certainly delivered an extremely faithful version of the Mega Drive/Genesis entry of Wonder Boy, Monster World IV. To a fault, even. With Asha in Monster World, you’re getting pretty much the same game with a few modern conveniences like save states and trophies/achievements, only now in 3D instead of sprites.

That’s not a bad thing per se, but taking into account that the original version is almost thirty years old and fairly dated by today’s standards, it would’ve helped to have a little more done to it than a mere visual touch up. For purists though, if you grew up playing Wonder Boy, you’ll fall right in and be immediately familiar with how it plays and controls.

Titular hero and recently promoted to the title of Warrior by the all powerful but still in need of a protagonist to do her bidding, the queen, Asha, moves and behaves exactly as you’d expect if you spent any time with any of the previous games. Enemies attack in simple, predictable patterns, and there’s not much to boss fights. You can jump, hang onto ropes and chains, too.

In true sidescrolling fashion, you make your way from one side of the screen to the other, sometimes into the background even, hitting monsters with your sword or casting spells that you learn during your adventure. As you explore a number of temples and caves in order to save four elemental spirits before the forces of evil have a chance to capture them and take over the world.

The dungeons you dink around in are of simple design, and you get to do a few puzzles in them before you get a chance to face off against whatever monster is waiting for you at the end. There’s no particular need for maps to any of these as you’ll basically be forced to go through every single room in order to find the switch you need to hit in order to open up the way to progress further or make platforms pop that allow you to get to otherwise inaccessible paths.

Our hero has little to say for herself letting others do all of the talking throughout Wonder Boy: Asha in Monster World. Some of their lines are even voice acted in Japanese, although the majority of it is delivered by text, giving you slight hints of where to go next or how to deal with the dangers that lie ahead. The humorous tone of the dialog is welcome and I couldn’t help but chuckle a couple of times at some of the jokes while playing.

Graphically, Asha in Monster World is colorful and very happy go lucky, if that can be used to describe its cel-shaded polygonal graphics. Like the core gameplay, the presentation is simple and to the point without a whole lot of fanfare. Speaking of fanfare, the original score is reworked in this and sounds fine overall, playing off the original’s main theme quite well.

If you end up getting the game physically on PlayStation 4 or Switch, you’ll also have access to the original sprite-based version of Monster World IV too, which was previously only available on PlayStation 3 digitally. Unfortunately, it’s absent from the download storefront release of any of the platforms.

All in all, Wonder Boy: Asha in Monster World is sure to please anyone looking for a very, VERY old school platformer. On the other hand, if you’re after a re-imagining that modernizes things for today’s standards, you’ll find this sadly lacking. It all depends on what you’re looking for in a re-release of an old game and your expectations in getting to replay it exactly as it was back when new or as an entirely reworked game for today’s audience. There’s value in having both approaches and in the end it falls to you to decide how you want to go at it as there’s plenty on offer on the market.