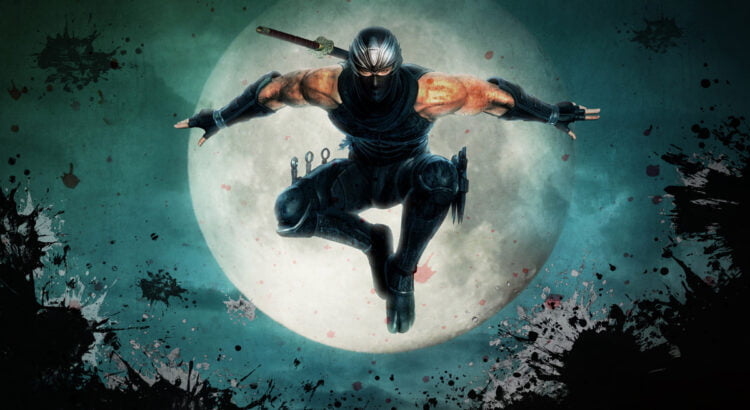 Oh, Tomonobu Itagaki. Now there’s a name I hadn’t heard in quite a while. Infamous a decade and a half ago but mostly unheard of these days, the former indoor sunglasses wearing head of Koei Tecmo-owned Team Ninja made a name for himself with games in the Dead or Alive franchise, which are known to be as technical to play as they are raunchy. And for the numerous controversies he’s managed to get into.

But perhaps he and his team’s most well known and successful project was 2004’s Ninja Gaiden revival on the original Xbox. Easily one of the biggest hits for that platform, Ninja Gaiden became a staple of character action games to come and is still cited as an inspiration nowadays for a number of releases. And for good reason, it being an extremely tightly designed and rewarding to conquer, but at the same time incredibly demanding and punishing action game.

Ninja Gaiden got a re-release a year later in 2005 in the form of Ninja Gaiden Black, which included a number of gameplay improvements and new difficulty options, basically replacing the original release and becoming the basis for what Ninja Gaiden Sigma would eventually be on the following console generation. Regardless of the changes done to Black that were carried over to Sigma, the core challenge in Ninja Gaiden remained unchanged, and I dare say that no game came close to being as tough to me outside of its sequel, even including the many Souls-likes I came to enjoy in the years that followed.

Funnily enough, for as modern as Ninja Gaiden felt at the time, it shared a lot with the original NES games from the 1980s, mostly with how it throws things at you at all times, and how cheap its core design can feel at times. While the NES games would often rely on repetition due to the fixed enemy and just downright mean enemy placement (I’ll let the classic AVGN do the yelling here), the newer version focused on beating muscle memory into you without an ounce of mercy. Defense and movement are key and if you don’t learn them quickly, you won’t make any headway plain and simple.

Ninja Gaiden II on Xbox 360 was no different. In fact, it was even worse when it came to being a mean sensei, thanks to its newly introduced mechanic where enemies would lose limbs as you fought them and throw absurdly damaging desperation moves at you right from the very first playable screen in the game. That’s not to touch upon the fact that its camera was absolute crap, which the developers used to plant traps in the form of sneaky enemies who would pepper you with throwing knives before you even knew they were there. Frankly, I have no idea how 2008 me even got to the last level in that game even if I was never able to finish it for good then.

Before this new collection, I had only played Ninja Gaiden 3: Razor’s Edge for a couple of minutes at E3 and I thought it was okay. The word surrounding it after release was that it was awful, and that certainly reflected in sales, resulting in the apparent death of the franchise, with only one new and apparently even worse attempt at a revival in 2014, Yaiba: Ninja Gaiden Z. The main complaint leveled at Razor’s Edge was that it did away with the merciless challenge of the previous two entries in favor of delivering a more blow-to-blow experience, and that enemies were nowhere near as dangerous as they once were. While the me from thirteen years ago would scoff at that notion now, my current self would be more than willing to compromise, especially given that to me at least, two incredibly punishing games were enough to push myself through and a change of pace might’ve been welcome. Then again, I’m no game designer, just a mere reviewer.

For people who might’ve missed the trilogy back when they were originally pushed out or those looking to reopen old wounds, the Ninja Gaiden: Master Collection is here for you, featuring all three games in the latest iteration they were previously brought out, that is, Ninja Gaiden Sigma 1 and 2, and well, Ninja Gaiden 3: Razor’s Edge, as it was back in 2012 on PlayStation 3 and Xbox 360. And let me tell you, that’s a heck of a lot of punishment to be had in a single concise release.

It’s been years since I last touched any of these games, and time has proved to be a mean mistress as I’ve basically lost all reflex and what little skill that I had at playing them. The first two games in particular look extremely sharp and are as evil as I remember them. They wasted no time kicking my ass, or if you look at it through the other side, I spent a lot of time meeting game over screens trying to get reacquainted with how they play, and up until now, have yet to get back or even get close to the point I was able to get in either that I did back when they were new and I myself was new(er).

The tight action is still very much present in these, but it’s clear to me that there’s a little bit of age to them as well. When it comes to navigation, both Ninja Gaiden Sigmas can be a nightmare, since some platforms can be extremely awkward to jump to or even practically invisible as they blend into the now low poly and dull, repeatedly textured environments. It would’ve been fine if failing to traverse these didn’t result in an instant death and push to the last save point I accessed, but them’s the breaks in these, especially the first one. I died to a stupid rope tied over one of those lethal gaps more times than I did to any of the bosses I’ve faced, no lie.

In fact, the fights that I expected to suffer through the most proved to be the less demanding parts in any of these, the bosses especially. While I would still curse that damn nunchuck wielding prick in Ninja Gaiden Sigma to hell, the rest that followed were quite manageable. I can’t say the same to everything in between them, and are just about as difficult and unforgiving as you might remember.

Granted, since last playing any of the Ninja Gaidens, I did enjoy the Nioh games immensely, and even though they might not be apparently relatable, they do have a lot in common when it comes to their design philosophy. Both franchises rely on having progression come in the form of experience and repetition playing them, and their challenge stems from learning and remembering by being beaten over the head with sometimes seemingly unfair obstacles.

With Nioh and Nioh 2 being Souls-like games, I ultimately ended up liking them more because of their inherent design and to me, they’re extremely successful as spiritual successors to Team Ninja’s work on Ninja Gaiden. And while I see value and appreciate there being a collection such as this Ninja Gaiden: Master Collection in order to potentially show these to a new audience, I’ve made peace with the fact that I’m probably never going to get back to the point I was in life years ago when I would consider Ninja Gaiden as fun. I enjoyed my time with them at the right moment when I did and am happy that I did so and even happier that I moved on.

Does any of this mean that Ninja Gaiden: Master Collection is not worth picking up? On the contrary. As a time capsule in gaming, it’s simply incredible. There’s no taking away the fact that Ninja Gaiden in particular is such an influential game, nor that its follow up is an even more punishing experience, or that what came after them might not float everyone’s boat.

These are games that are worth having in your collection even if you, like me, might not even get to the end of them, or differently than myself, might find the time and drive to conquer them as I tried so hard to back in the day. The real kick is having these games available on the current gen and with that in mind, the Ninja Gaiden: Master Collection does what it came for in spades. That’s even more so whether you go for it on older gen consoles like the PlayStation 4 as I did for this review, or like my pal Leo did on Nintendo Switch, where they run as smoothly as expected for older titles such as these.