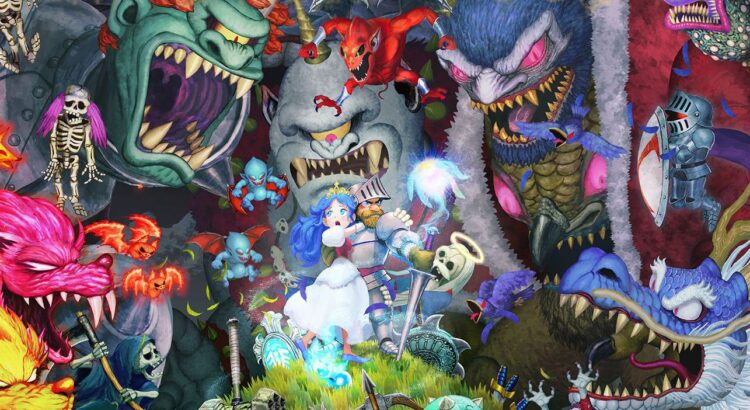 If there’s ever an illustrated dictionary for games, under the definition of hard would definitely be a picture of Ghost ‘n Goblins. Any of them will do. And by hard I mean really really rough. The old school kind of difficulty you’d only see out of games that were born out of the arcade. Designing for the arcades was different than what was done for consoles, looking to squeeze as many quarters out of players for as little playtime as possible, but when people started renting their games out, designers saw the chance to make their creations incredibly rough to finish in order to guarantee continued rentals.

Pick any of the games in the Ghosts ‘n Goblins franchise and you’ll likely get one of the toughest in any system. In the case of the SNES, Super Ghosts ‘n Goblins was probably the one entry I played the most, and for as problematic as that game was due to its constant slowdown and general weak programming — something that is now fixed thanks to some smart engineering and a dose of hacking — I kept playing a lot of because, well, it was the only thing I had to play at that particular time.

What made these specific games so difficult was a mix of a few of the meanest concepts in game design. We had cheap enemy placement that would be cleverly and deviously planned so you’d miss jumps and fall to your death, as well as the truly awful way our hero Arthur would be knocked back when hit, not to mention having no air control when jumping and the overall input to action sluggishness. Throw all of these into a blender and you’ve got one hell of a smoothie that many would find tough to swallow.

Over the years, Capcom has tried to revitalize Ghosts ‘n Goblins with varying degrees of success. My best liked attempt were the Maximo games on PlayStation 2, which shifted the action to over the shoulder 3D, made the action much much smoother and at the same time kept a decent amount of challenge, which was especially the case of the first entry, Maximo: Ghosts to Glory.

Unfortunately, the series only lasted for two games, but Capcom didn’t give up trying to make Sir Arthur relevant again. He was part of Marvel vs. Capcom 3’s vast roster, along with his frenemy Red Arrimer, and even starred in an often reviled remake of the first two games in the franchise called Ultimate Ghosts ‘n Goblins.

Now we’re getting another one, with Ghosts ‘n Goblins Resurrection. Released earlier this year on the Switch and only now getting ports on PC and other consoles. With it our buddies at Capcom kept to the basics of the original game, making some smart decisions by expanding the established style of GnG with a few modern touches. Things like checkpoints and an upgrade tree, along with dynamic difficulty settings you can change in the middle of a level run. That’s not to say that it’s any easier than any of the previous entries, but it’s now certainly more manageable and, most importantly, enjoyable.

To anyone who’s played there sidescrollers in the past, Ghosts ‘n Goblins Resurrection will feel instantly familiar because it pretty much plays exactly like you’d remember. Arthur is still slow to respond to controls, and the quirks about his physics remain the same. Progression is methodic as you make your way from checkpoint flag to checkpoint flag, and depending on the difficulty you start out at, you’ll get the option to bump it down if needed, with the expected penalty to your score at the end.

Throughout levels that you get to pick from which path you want to take on the map screen, you’ll be able to catch and use umbral bees, the game’s currency for unlocking new abilities and perks in between stages. Stuff like magic spells, being able to carry more than one weapon (a MUST, really!), or resurrecting randomly when defeated. The best part? You can freely refund points as needed in order to try out a variety of builds, making it worth just trying out crazy setups as long as you have enough bees to invest.

This being a game with a pretty big investment on making things more accessible to more casual players, it also manages to keep things interesting for veterans of the series. The range of difficulty options that truly bring out the worst (or best, depending on how you view it) of Ghost ‘n Goblins merciless and utterly punishing gameplay. But even on the Squire difficulty, which is supposed to be the easiest one that still involves killing Arthur — “Page” makes him immortal, allowing you to cruise through a limited version of the game — Ghosts ‘n Goblins Resurrection is no joke.

I’ll come out and admit that the look that they went with for Ghost ‘n Goblins Resurrection didn’t please me at all during its announcement, but that quickly changed once I got to play it. The paper cut style of animation is full of personality and extremely well done, making the old tried and true character designs pop up, Arthur’s especially. I can say the same for the music, which is expectedly all sorts of nostalgic by bringing back the classic tunes of the original game in new bombastic renditions, including of course the series’ theme which would be a punishable offense not to include in this lovingly put together version of the game.

Capcom’s been on a roll with their attempts at making their core franchises more enticing to a broader audience, with Monster Hunter Rise being the most playable version of MonHun so far and Resident Evil Village a theme park ride of horror with rides for basically all tastes, and with Ghosts ‘n Goblins Resurrection is probably the most approachable their hardcore platformer will ever get at this point. Yeah, it’s still rough around the edges by sheer design, but if you can stomach its trial and error nature there’s a gem to be had and conquered, or better put, slayed with this one.