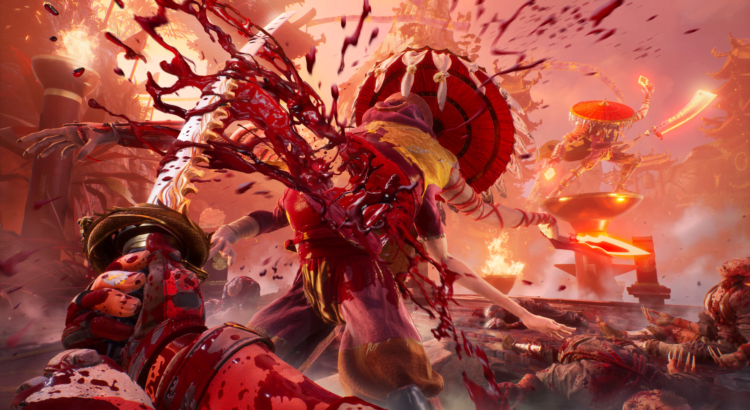 Over the last decade, Polish developer Flying Wild Hog has taken the Shadow Warrior shooter series originated by 3D Realms in 1997 and made it very much their own. With each new entry, the studio has felt free to make big changes. Now that the long-delayed Shadow Warrior 3 is finally here, it’s clear that the developers have given the formula its most aggressive rework yet. The result is a startlingly stripped-down sequel that focuses exclusively on its short but sometimes glorious single-player campaign.

In effect, Flying Wild Hog has bet everything on the concept of “less is more”. With a steely precision worthy of protagonist Lo Wang’s sword, they have taken a long look at their formula and cut away everything they deem nonessential. The casualty list is long. Co-op, semi-randomised levels, loot mechanics, and a photo mode have all gone on the great bonfire of features. The campaign itself is much shorter and far more focused than the meandering path of 2016’s Shadow Warrior 2, and clocks in at only around seven hours.

This ruthless approach by the studio is likely to elicit strong and mixed opinions. While few are likely to miss the overcomplicated upgrade systems of the last game, the absence of multiplayer will likely result in some lost sales, and understandably so. There is no doubt, though, that what remains of Shadow Warrior 3 has a laser-like focus. Fans of fast-paced shooters that emphasise mobility will find this to be one of the best FPS campaigns since Doom Eternal.

When the game opens, ninja mercenary Lo Wang is at a low ebb. Far from having saved the world at the end of Shadow Warrior 2, he has in fact all but doomed it by accidentally releasing a vast, ancient and insatiable dragon. Lo Wang is compelled to team up with his former nemesis Orochi Zilla to find a way to defeat the beast and save what little remains of a fallen world. Writing has long been a weakness of the series, and Shadow Warrior 3 does little to change this. Delivered serviceably by new voice actor – and apparent 11th hour choice – Mike Moh, Lo Wang’s jokes are as hit and miss as ever. Like everything else about the game, the story is straightforward but serves as a decent enough trigger for the action.

And what action. Each combat arena is hyper-kinetic splattery mayhem, and a thrill to play. Lo Wang is more mobile than ever; he can slide, wall-run, double-jump, dash, and grapple. Deft use of these abilities can help a player cross large distances in a few seconds, and bring the hurt to enemies in a host of satisfying ways. Between each fight there are short platforming sections which are fairly simple and often fast-paced. These are excellent showcases for the game’s beautiful environments, crafted lovingly in Unreal Engine 4 and encompassing ruined temples, a frozen forest, and a collapsing dam to name a few. As fantastical as the game is, some will find its borrowings from Chinese and Japanese culture to be overly stereotypical, including the music. The recruitment of new Asian voice actors is a welcome step in the right direction, however.

The alternation between platforming sections and arena battles is going to invite a deluge of comparisons with Doom Eternal, but Shadow Warrior 3 is far from a mere clone. For one thing, these two series have been in a complex dance of mutual influence for years. Lo Wang could dash before the Slayer could, for example.

Importantly, Shadow Warrior 3 has a number of interesting twists on familiar mechanics. The new “finishers” superficially resemble the glory kills and chainsaw attacks from the recent Doom games but in practice work quite differently. Brilliantly, each enemy type destroyed using a finisher gives Lo Wang a unique “gore weapon”, an eccentric temporary killing machine of one kind or another. The slinky jakku is a kind of demonic, cackling jack-in-the-box. Kill one with a finisher, and Lo Wang gets a hand-cranked rapid-fire firework gun which violently explodes after dealing out its colourful carnage. Conversely, the frozen brain torn out of the sluggish kugutsu demon is used as a freeze grenade, briefly fixing foes in place.

The use of Lo Wang’s katana has always been a key ingredient in the Shadow Warrior soup and here it is even more integral. The “Dragontail” sword lacks a weapon slot of its own; instead, it is ready to strike at any time using the right mouse button. Yokai eliminated using guns drop health, while ones bisected with the blade drop ammo. This strongly encourages players to continuously alternate between the small but perfectly formed arsenal of six guns and the sword – something they can do with real dexterity. Everything Flying Wild Hog has seen fit to include is polished to a shine. Even explosive barrels are interesting – there are three types, each with their own elemental effect and Lo Wang can shoot them, smash them into enemies with a chi push, or yank them closer with his grapple. There are upgrades for Lo Wang himself and for his weapons, but these are far simpler than the confusing morass of the previous game.

Shadow Warrior 3 is what some would call a “AA” game, and is priced accordingly. Even so, some players will baulk at the idea of buying a game which has only one mode and which can be finished in under seven hours. Having said that, the game’s combat is so frenetic and fast-paced that it would arguably outstay its welcome if it was much longer. This puts it in a similar category to something like Ghostrunner. Not all players will find what they want in this ruthlessly stripped-down shooter, and even this brashly fun campaign is a little difficult to recommend at the price. On the other hand, the direct and minimalist approach here can feel like a breath of fresh air, compared to some of today’s shooters, bloated as they are with a host of excess menus, upgrade systems, and live service features.

Ultimately, Shadow Warrior 3 is best judged for what it is, not what it isn’t. Lo Wang’s latest quest is arguably his best. Short, sharp, and shiny, it’s like a bullet – or maybe a shuriken. Old-school shooter fans who approach it with its quite deliberate limitations in mind are sure to have a good time.