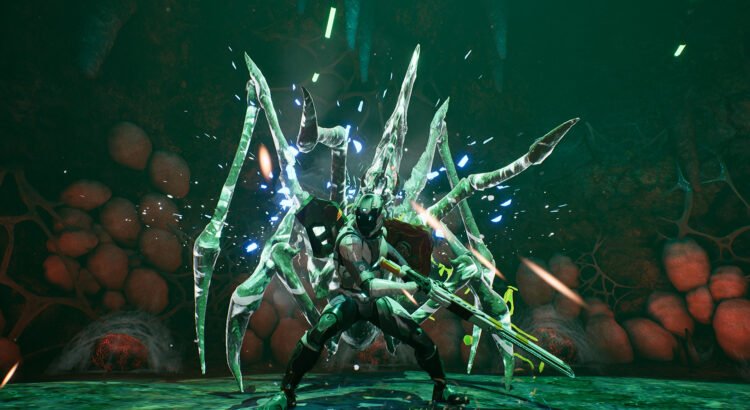 Brazilian developer Massive Work Studio’s Dolmen has been a staple of my visits to Brazil Game Show for years. After many troubled years in development, and a number of failed crowdfunding campaigns and publishing contracts later, that team’s attempt at a Souls-like is finally out, now under Koch Media’s Prime Matter banner. It definitely shows its age in just about every department, and for as hard as it tries to add its own flavor to the Souls formula, it never manages to be anything but mediocre.

Dolmen has you playing as a futuristic marine type character that infiltrates a space research station that’s been overrun by aliens. Its main resource, the titular dolmen, was discovered to possess time-shifting properties, which once put into practice can bring you back to life whenever you happen to die, along with everyone you’ve offed.

You get to pick from less than a handful pre-determined archetypes that start off with each of the game’s weapons, but like its inspirations developed by From Software, you can eventually branch out by leveling up and suit your character to your playstyle. Dolmen, like Dark Souls, is incredibly cryptic when it comes to what each of its stats relates in practice during gameplay, so you’ll have to experiment until you find something that fits you.

Or just guide yourself by putting points into whatever the next gear upgrade demands in terms of stats. Dolmen is ridiculously generous when it comes to giving you materials in order to experiment with the number of weapons and armor sets that it offers, which is good in a way and bad in others, since, well, there’s not much of a difference playing a game as stiff as Dolmen is for starters.

What comes close to the usual character development is presented via three distinct meters that change upon the combination of gear you equip at any one time. Items are graded not by rarity but by type, so if you bulk up on any one of those in particular, the further you’ll get in that tree, which provides an assortment of benefits and buffs. It’s kind of a clever way of allowing you to play around with character builds without committing too much to any one at a time.

My time playing Dolmen started out quite painfully, especially considering that I jumped into it shortly after hundreds of hours playing and thoroughly enjoying Elden Ring. Granted, it might be unfair to actively compare Dolmen to that game simply because of the fact that Massive Work Studio is a very small team in comparison to From Software, and the game’s been in development for a long time, but it is what it is – a Souls-like in every way, and not very good one at any of them.

Still, I persevered and managed to find a way to make as good use as possible of Dolmen’s attempt at being unique when it comes to combat. In it, you can use ranged weapons to apply elemental states to enemies, which initially can seem really terribly implemented if you happen to pick a class that only has a pistol. The pistol is an absolute nightmare to deal with because it’s slow to shoot and takes ages to recharge, but once you manage to cook up any of the other guns, like the shotgun, things take a turn for the better, and in my case, I started to make good progress in the game thanks to it.

That’s not to say I was having a fun time playing it. Dolmen is an incredibly clunky game that regardless of the time it spent in development still feels unfinished, unpolished, and problematic in any way you try to approach it. For one, enemies have zero hit detection and no stun states whatsoever, so even though you might be doing a ton of damage to them, they manage to whack you back with no possible recourse on your part. That’s because there’s no way to cancel out attacks and how slow Dolmen is to react to your inputs.

Back when I reviewed Deck 13’s The Surge 2 I complained of how slow their games felt to play, but Dolmen takes that into an entirely new level, one that forces you to try and plan many moves ahead while having to deal with the unpredictability of your foes. Unless you burn them down right away, you just might find yourself out of luck when fighting even the lowest of enemies if you happen to run out of energy at the wrong time.

Hold on, that’s not even the worst part. In order to regain that energy, you have to use an item that takes a couple of seconds to fill up your gauge, leaving you vulnerable to attacks that can interrupt that process. Regardless of that particular annoyance, having to juggle energy management with the overall mediocrity of playing Dolmen proves to be one of the game’s sole strengths. Instead of having you heal with any emulation of Estus Flasks or even finite items, you use energy to do so, the same resource that you spend as ammo, forcing you to be conservative at points, adding an admittedly thin layer of strategy to your playing.

If there are other strengths to Dolmen, you’d be hard-pressed to find it in the actual playing of it, but in its presentation. It’s one of the rare releases that sports a full Brazilian Portuguese audio track that’s surprisingly decent, so there’s that going for it at least. Sadly the rest of the sound design is very uneven and repetitive, as are the few pieces of a musical score as there are throughout the game.

Visually, Dolmen isn’t an entirely ugly game, but it’s not much to look at either. It’s very derivative to the science fiction pool of slimy space goo and bugs and clean brushed metal you’d find in just about any piece of film, literature or game in the genre. The few armor sets you can craft are as futuristic as expected, with an alien one thrown in between that’s absolutely and hilariously horrible to look at.

At the end of the road, Dolmen can’t be called a total failure nor a success. What you’ll play if you decide to pick it up is a very dated middle of the road Souls-like that will test your patience and not offer much in the way of any worthwhile reward for sticking with it. With so many much better alternatives out there – any of them are a much better time, really – it’s tough to put my foot down and recommend this game. For a small team’s project, sure, it can come off as wildly ambitious, but the end product is deeply flawed and not a whole lot of fun to play.