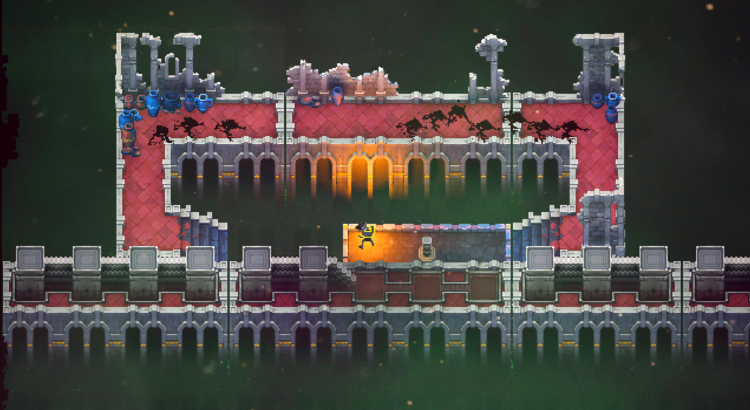 Loot River’s pitch is a strong one. Described as “Dark Souls meets Tetris,” Loot River is a roguelike wherein you move platforms (often in the shape of Tetris blocks) around while fighting enemies in Souls-like combat. It’s a roguelike that combines light puzzle solving in how to navigate the game’s tight corridors using the large platforms (especially when you’re trying to grab a treasure chest) and the lethal nature of Souls-like combat splendidly.

Loot River is light on much in the way of plot, instead taking a lighter approach to narrative by implying a lot of facts about the world but seldom outright saying anything. At the start of the game, you die – either at the hands of a strong boss or by force if you defeat them – and are then given a second chance at life. There’s a catch, however: while you can’t technically die anymore, you’re trapped in this fortress, forced to keep making runs through flooded remains, cleansing each world of the corruptive influence of “the relic.” Item descriptions drop hints of lore and NPCs provide bits and pieces of info about the world and themselves, but what little story there is largely is there for color more than anything.

Combat is largely defined by most weapons being slow and heavy. Two of the starting weapons – a longsword and a spear – are among the fastest of the ones I’ve encountered, and even those still have a weight that makes them feel a touch more deliberate than you would typically expect. Most other armaments are heftier (even those that don’t appear that way), each swing being slow and arduous. Because of that, they do hit really hard, but it also requires you to really learn the move sets and how to wield them effectively so you don’t end up taking a bunch of free hits.

The focus on heavy weaponry isn’t something I’m usually keen on (slow weapons rarely feel good to use), but as Loot River is a Souls-inspired game that forgoes a stamina system, it feels necessary. Combat in these sorts of games is dictated by a very particular rhythm that forces you to be very much aware of how many attacks you can land without putting yourself at risk. The weighty feel of each swing serves as a way to create that rhythm. If stamina isn’t the thing stopping you from spamming attacks relentlessly, having to be very conscious of the windup, range, and recovery of each swing will. It successfully instills the same fears of overextending that define Souls-like design. The way you easily fall into a trap of trying to fit just one more attack in because you’re so close to finishing off an enemy that you end up paying for your hubris. It’s so much easier to fall into in Loot River because there’s nothing stopping you. Hell, the game even makes successive attacks deal more damage, further tempting you to keep attacking. Without the safety of a stamina bar or equivalent, the game removes an easy visual signifier of whether you can (or should) act, forcing you to be much more proactive in your play as a result.

Additionally, as this is a game played on platforms you can move and reposition at will, the slow swing speed of most weapons feels designed to encourage you to make the most of the platform movement. I struggled a bit early on because I kept trying to just roll around enemies and get my hits in where I could. I was trying to play Loot River like I would any other Souls-like game. It wasn’t working well. Once I started actually using the platforms’ movement, a lot of harder foes went down with much less hassle. It does lead to a reliance on hit and run tactics sometimes – back off, charge a strong attack, move back in right as the attack becomes active to hit everyone gathered at the edge – but considering how easily you can become overwhelmed, it’s a good strategy.

Large groups of enemies often reside on tightly packed clusters of platforms, which become more and more common the deeper you get. As soon as you make landfall, everyone there will immediately start bearing down on you almost every time. You can try fighting them head on, but that almost always ends poorly. You can try to run past them, but chances are good they’ll be able to keep up with you just enough to make it onto whatever small platform you’re using to make an escape with, thus pitting you against a potential group of foes with very little room to maneuver. It instead encourages you to think creatively whenever possible, to consider the size and shape of your current raft and how best to place it to lure the enemy into the right spot for you to rush past and escape unscathed or to whittle away at their numbers safely until you can engage them directly.

Reaching the end of any zone leads you back to the hub, where you’re able to spend knowledge (the central currency) to unlock new weapons, armor, and spells to appear going forward. Each piece of armor has its own abilities, such as letting you use an additional dash or granting you an extra stat point or general defense in exchange for a smaller field of view. Spells are randomly assigned to weapons and provide great support utility via a variety of ranged attacks and a couple of nice movement options (a short range teleport and invisibility). The basic lightning spell is a bit awkward, though, due to how you seemingly can’t influence its trajectory. It’s good when it works, but difficult to use reliably.

Modifiers can be activated between runs as well, which do anything from unlocking shortcuts to make each run longer, randomizing starting equipment to altering certain enemy attributes, increasing the number of enemies throughout, or reducing the complexity of a zone to make it easier to navigate. You can only use a few at a time, though, which forces you to consider what you’re looking to achieve on each run.

Most importantly, however, you can choose to double your healing potions every time you swing by there. You start with only four healing potions (five if you use a modifier that adds one extra). By handing some off to the alchemist Soap before setting off to each new zone, you can double the amount you have available once you return. It creates a risk/reward scenario where you have to consider how much potions you actually need to get through the coming zone versus how much you think you’ll need for later areas.

Accessories further play into this by offering additional ways to heal yourself (assuming you’re lucky enough to find the right ones). Most of them are rings that offer simple stat boosts, but there are also some confer more notable effects. Successful parries healing a bit of health, for instance, or every attack dealing one point of damage in exchange for a small chance of getting a full heal; your first attack always teleporting you directly behind your target for easy backstab damage, allowing you easily avoid attacks and deal extra damage with the right weapons; a free revive that restores you to 50% health should you die at the cost of the trinket breaking. The types of effects they offer are varied and are key to making each run feel unique and interesting.

I stumbled upon a really strong build early on through the use of the items that healed me a good deal on each successful parry and teleported me behind enemies on hit. It effectively let me slay stronger foes safely if I had to engage them head on (can’t get hit if I’m always outside of their attack range) while also giving me plenty of leeway on parries. Any health I lost for a mistimed parry was going to be restored anyway, so it was the perfect time to learn how to do it. Even better, I also found armor that let me dash twice, making it that much easier to avoid damage. The timing on all this was perfect because I was running low on potions, so now I could just hold onto what I had left until I got back to the hub and then save the rest for when I really needed them.

It was great! It was the kind of moment where everything clicked into place, where breadth of possibilities became clear. I’d been enjoying Loot River plenty before then, but that was the moment where it truly came together.

But then, at some point, the accessories stopped dropping entirely. For the first few hours I was getting them regularly, but eventually they just… vanished. I can’t tell if it’s just a really strange bug or if the game changed in some drastic way pre-release or what. Their absence makes the loot pool feel much smaller and less interesting, though. New weapons and armor are good and all, but the rings were what really made each run feel unique. As of this writing (just before this review is published), I still haven’t seen any, even after starting new save files. I don’t know how or why they’ve ceased to exist, but it’s a definite loss.

An unfortunate side effect is that character growth then feels… moot. Runs in Loot River aren’t terribly long (maybe an hour or two at most depending on the route you take and how thorough you are), the number of levels you gain along the way being relatively few. The highest I’ve topped out at level-wise is around six or seven. That’s not nothing, but in the grand scheme, it doesn’t give you much room to really shape a build over the course of a run. Without the stat boost rings, which would allow me to either boost core stats further or boost stats I wasn’t as invested in to keep myself well-rounded, I ended up mostly focusing on health to ensure I could take hits, maybe a bit of endurance as well to increase poise so I can stagger enemies more often. Strength and dexterity didn’t feel especially useful since I could just wait for higher level weapons to drop to increase my attack power, particularly given how small the damage gains are.

It’s a shame because I’m now stuck playing an inferior version of the game. A version I’ve still enjoyed, but an inferior one nonetheless. The game’s fundamental aspects are strong enough to carry it in spite of that, but it’s hard not to think about how much better it could be if whatever changed/broke were reverted. I don’t know what happened, and I would hope it’s just some weird thing I alone encountered because Loot River really is great and I’ve enjoyed it in spite of whatever happened. The developers are at least swiftly updating the game to fix bugs and further fine tune things (latest patch just made elemental effects start being added to weapons pretty frequently now, which is a big change for the better), so I’m hopeful it’ll sort itself out eventually. In the meantime, if you’re fine with dealing with some potential weirdness as it continues to refine itself, Loot River is well worth checking out.