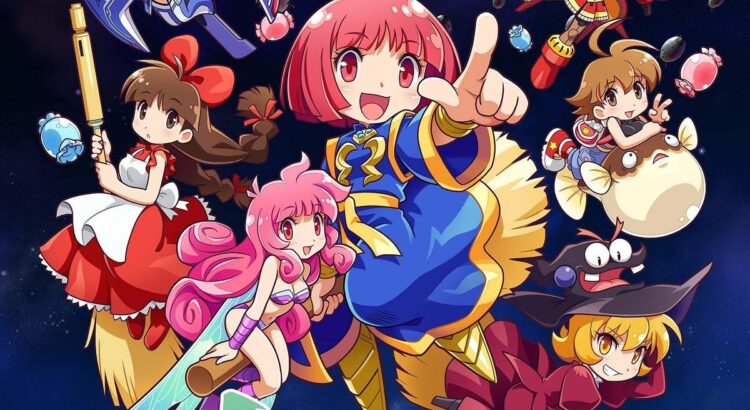 There are things that are better left to their own devices if they just work. That’s the case of ININ Games’ latest release in the Cotton series, which they’ve been steadily populating the eShop chock full of ports for the past year or so. Unlike previous games, though, Cotton Fantasy is a completely new release in the series, and is the first developed by ININ themselves. It also happens to be quite handily the prettiest of the bunch.

In terms of gameplay, if you’ve had any experience playing any of the Cotton games in the past, or any shoot ‘em up at all, you’ll feel right at home with Cotton Fantasy, as it’s basically a horizontal shooter tuned down to easy mode. That means that this game is as safe as they come in terms of difficulty and can be enjoyed by just about anyone who can mash the shoot button on their Switch.

That doesn’t mean that the game’s not worth playing just because it doesn’t provide much of a challenge. The extremely colorful and engaging presentation helps keep things fresh the further you shoot your way through story mode, where you’ll get to witness a cute little adventure starring titular Cotton and her equally cute friends as they destroy their way through hordes of all manner of monsters and the like.

If you’ve ever imagined doing really well in a game like Gradius but haven’t had nearly the skill needed to do so, well, Cotton Fantasy might just be the game for you. And you’ll be doing so in a variety of different ways since each of Cotton’s best buds are equipped with a host of weapons and skills that set them apart quite well. My favorite, guest character Umihare, from the Umihare Kawase series, rides (an aptly in theme) bubble fish and shoots projectiles in a pattern that does a very decent job at covering the screen with deadly spheres. Very neat!

Outside of the aforementioned story mode, where you can take alternate paths through different stages every time you play – sorta like Star Fox 64 back in the day – you can also drop by training mode and test characters out or see how you’re stacking against your friends or randoms in the global online leaderboards. Outside of that, there’s not much else going on in this witchy shoot ‘em up, which is a shame. An arcade mode would’ve been a welcome addition, allowing you to replay levels you finished or something similar, but nope, not the case here.

When it comes to bullet hell shooters, I don’t really need a whole lot in order to enjoy them. Big explosions and nice graphics, alongside a decent challenge curve is just about right when it comes to my personal taste playing these, and Cotton Fantasy checks nearly all of those boxes. It’s a tad too easy for me generally, but then again, for the time I’ve had the game in for review, I’ve had a couple of outings where I popped it in for a go after a tired day of work and it was just the thing I needed to unwind.

All in all, Cotton Fantasy keeps the series tradition of providing plenty of eye candy and a pushover level of challenge that should please newcomers to the genre even though veterans might find themselves somewhat bored by the straight ahead approach that the franchise is known for and it kept intact in this new entry. Regardless of where you stand, there’s no denying Cotton Fantasy is one heck of a charming little game any way you look at it.