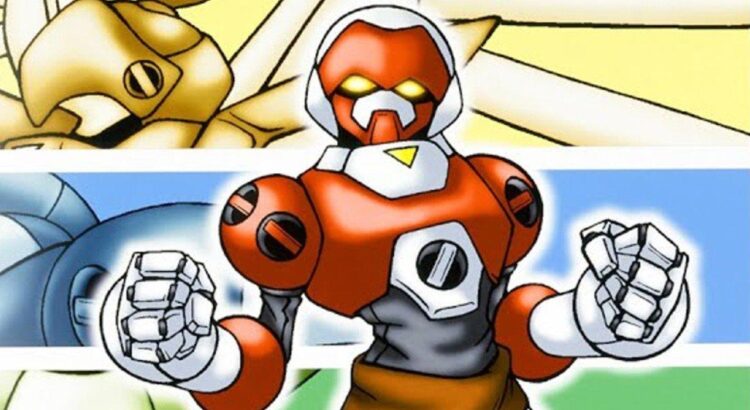 The latest in the cavalcade of Neo Geo Pocket releases on the Switch is Biomotor Unitron, a dungeon-based RPG where you collect materials and parts in order to put together an increasingly more powerful robot suit of armor in order to compete in an arena.

There’s not much of a story to Biomotor Unitron besides that, other than the few bits of dialogue you engage with the townspeople around the battleground you do your fighting in. Progress in the game is measured by the number of wins you manage to get at the arena, the further you get in the bigger the rewards and the higher titles you attain. But before any of that you have to build a robot that can get there, and let me tell you, it takes time. And time is money.

Biomotor Unitron is as traditional of a JRPG as you can find, a game of its age, really, where repetitive grinding will get you everywhere. But more importantly than grinding is farming, and farming for mats you’ll do plenty of in order to acquire the biggest and baddest weapons and armor parts in order to trounce the opposition. There’s quite an arsenal you can put together, and you’ll find that it’s worth to vary your options when it comes to coming out on top of fights since armaments tend to work differently depending on the configuration of your enemies in the arena.

Thankfully, there are a number of crafting options that become available the more you play the game, and they’ll require you to dive into the game’s confusingly put together dungeons in order to find the best items. Why do you want the best? Because the yield becomes increasingly better the rarer the mats you invest in, which makes farming a necessity if you don’t want to get stuck at the lower ranks. It stinks there.

SNK did a good job at providing a time sink of a game back in 1999 with Biomotor Unitron. Out of the dozens of games that were released for the Neo Geo Pocket at the time, this one’s got to be the most out of left field of the bunch, considering that most of what we got to see for that system were portable ports of the company’s arcade hit fighting games. That makes Biomotor Unitron, for as stuck in tradition as it is, an outlier within the catalog.

Then again, that was the case within the Neo Geo Color’s limited selection of games. Now we’re talking about the Switch, an entirely different case with a plethora of options when it comes to RPGs and plenty of much more modern and frankly more entertaining options. Does this fact make Biomotor Unitron a bad choice? It depends on whether you’re in the mood for the type of gameplay it delivers, one that’s certainly dated, a gem of its time that makes no qualms about showing its age.

If you’re into building a collection of historical pieces, the Switch is amounting to be quite the little museum. Between the many Sega Ages releases of the last few years, the bevvy of Switch Online older console games, and SNK’s effort at porting every single game they’ve ever released back in their golden days, we’re just spoiled as all hell here. Hopefully Biomotor Unitron isn’t the last of these releases. Even if it’s not the most exciting game you’ll ever get your hands on, the fact that it is readily available on Nintendo’s digital marketplace when it would otherwise be relegated to purely illegal means otherwise is worthy of praise.