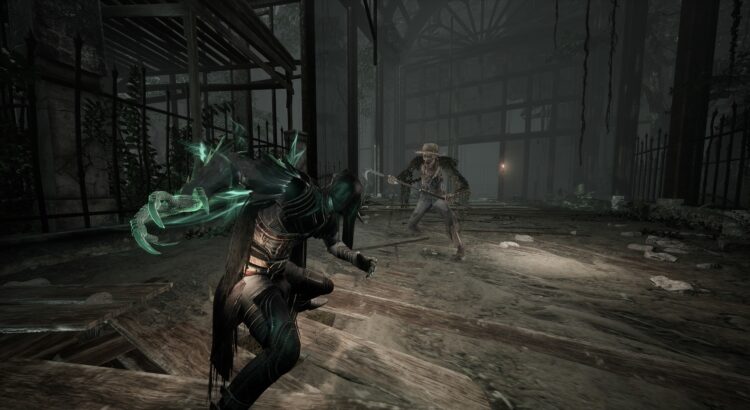 Thymesia is a game without a stamina bar. In any other game, that’s not notable, but in one so clearly inspired by From Software’s work? It’s significant.

Thymesia is an action-RPG set in a world beset by a deadly plague. It puts you in the role of Corvus, an alchemist who has to relive his memories to concoct a cure (or the next best thing). It’s a game where the Souls influence is obvious throughout. You run through drab, abandoned or crumbling towns and castles fighting monsters and the mindless husks of the populace that remain wandering aimlessly, unlocking shortcuts to make traversal easier and faster. Where the story is delivered primarily through brief conversations with the rare non-hostile character, and background and lore is found via scraps of text littered throughout the world. The sort of light, often hands-off approach to storytelling that provides only as much as you wish to engage with.

It is a game where you have a set number of healing potions that automatically refill upon resting at “beacons,” which also revive all the enemies in the area upon use, and collect “memories” by defeating foes to level up with that are left behind on death but can be retrieved should you not die again before reaching them. Heck, the text that appears on death or activating checkpoints is more or less the same as what you would see in a Souls game, down to the font and text size itself. It even ends the introductory tutorial with a boss you’re meant to lose to, a la Demon’s Souls or Elden Ring. Its influences are impossible to ignore. From mechanics to aesthetics and general vibes, it’s clearly trying to be a Souls-style game.

Except Thymesia doesn’t use a stamina bar, one of the fundamental aspects of the genre.

Traditionally, stamina is a foundational element because most of what makes the design of Souls-style combat work flows from it. Combat in these sorts of games follow a very particular rhythm that forces you to be aware of how many attacks you can land without putting yourself at risk. It intentionally limits your ability to act so as to teach you to be careful. Stamina archives that by forcefully limiting what you can do and when, adding a material cost to every swing of your sword or roll to safety, so you have to make them count.

Because there’s no stamina system, that material cost doesn’t exist. You can swing your weapon for as long as you want without restriction. You can roll away from attacks as many times as you need until you feel safe. The game has measures to avoid letting you attack endlessly without fear of reprisal, of course (an invisible “counter attack” gauge that builds over time), and the dodges have enough recovery to ensure you can’t just spam it and never take damage, but the absence of stamina alters the nature of combat greatly.

Most notably, there’s no restrictions on actions at all. Attacks are quick and can be canceled with ease into a parry with your dagger to counter a sudden attack or a backstep to create space. Drinking potions can even be interrupted up until Corvus begins to drink if you find yourself in a bad spot and need to retreat further before restoring health. With a stamina system, you would be locked into any one of those actions until the animation had finished to make them committal. You’re spending energy to do these actions, and so you can’t just cancel them whenever. You have to own up to your blunder and take the damage. Free from that friction, Thymesia takes a more aggressive approach to battle.

Offense is not based around carefully finding openings to exploit while always being conscious of the limits of your abilities, but rather moving quickly and wearing down your opponent as swiftly as possible. It goes about this in a unique fashion. Your main weapon, a sword, doesn’t deal direct damage, but rather “wounds” the enemy (deflecting attacks also inflicts wounds). These wounds are temporary and can be recovered if you back off for too long. Using “claw attacks” locks in that damage, forcing you to swap between the two attack types constantly.

It feels a bit odd at first because of how claw attacks work by default. At the start, you cannot seamlessly chain into claw attacks from sword strikes or parries. They’re a single hit move with just enough windup that there is a gap between you pressing the button and Corvus actually attacking. It makes claw attacks act a bit more committal as you need to find an opening to strike instead of just cleanly chaining between attack types. As I started leveling up and gaining skill points, however, I was able to change it from a single hit attack into a fast, multi-hit one instead. The trade-off was that I sacrificed higher raw damage (I could have kept it the same and made it stronger), but given how much Thymesia feels built for speed, I didn’t mind.

Once I did that, combat clicked instantly. Bouncing between sword strikes, parries, and claw attacks creates a satisfying rhythm. Moving between each one seamlessly, quickly chipping away at the enemy’s health until they’re downed and ready for the finishing blow, feels good. The limited enemy variety means you can pretty quickly auto-pilot your way to victory, but since the game isn’t terribly long (less than ten hours), it’s not really a problem.

It is rough around the edges, but in the way that a team who is clearly punching above their weight is. Its level design and the spaces you explore are drab and often uninteresting. There are moments of inspiration — a village built high on tree branches near a sinister circus that’s overrun with poison sacs or a garden of a research center overtaken by red crystals — but actually traversing and interacting with these spaces is lacking. It’s functional, but… staid. Boss battles range from thrilling duels that test your ability to meet the tempo of their attacks to just sort of okay, their (thankfully rare) unblockable attacks often frustrating due to how hard it is to gauge their range on top of how little time you have to get out of the way. But when the combat works as well as it does in Thymesia, when everything clicks and begins to flow, its shortcomings are easy to live with.

As more and more games take inspiration from the Souls games and play with those mechanics, I hope more consider taking Thymesia‘s tack of seeing what removing a fundamental aspect has. The Souls-like designation is more than just mechanics at this point, I think, and seeing more games challenge what genre entails is something I’d like to see. Thymesia‘s choice to remove stamina is odd on its face, but the results speak for themselves.