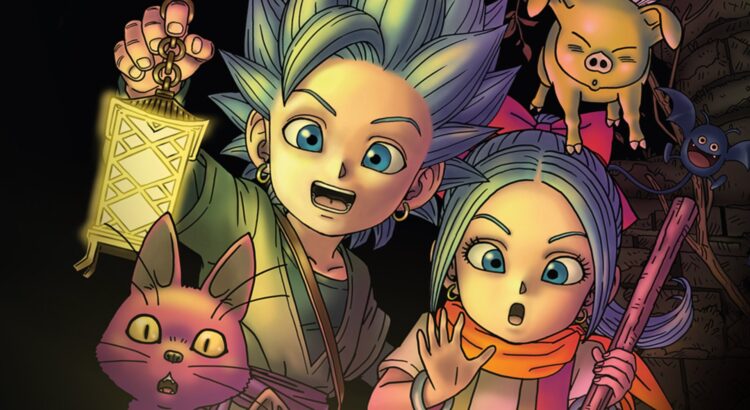 In the film National Treasure, Ben Gates replies to being asked if his group were treasure hunters with, “actually, we’re more like treasure protectors.”  This could apply to our intrepid protagonists here as well, as you’ll find and protect a wide variety of treasures on the course of your journey.  We drop in on blue haired siblings Erik and Mia (of Dragon Quest XI infamy) as children at the outset of the game, infiltrating a group of pirates, swiping treasure, and making a quick escape.

After the harrowing introductory tutorial section, Dragon Quest Treasures has our intrepid group finds a large run down fortress, choked by vines and falling apart.  Of course, this would make an excellent base, and over the course of your adventure, it will start to look a lot more habitable.

Your base isn’t just a random fixer upper, either.  There is a lot that you can do here, eventually expanding the facilities.  Perhaps most importantly, it’s here that you will rest and regroup before striking out at the various islands surrounding your base in search of treasure.  You’ll also craft ammo for your slingshot, explore the depths of the ruins in a multi-layered dungeon known as the Snarl and recruit friendly monsters to join your fam at the recruiting center.

Dragon Quest Treasures‘ monsters come in a variety of flavors and can be exceptionally useful.  While Erik and Mia come equipped with a dagger and a slingshot, the monsters that you can recruit do most of the heavy lifting, in terms of battling the many baddies out in the world.  Recruiting monsters is a bit of a process, however.  You have to encounter the monster out in the world and defeat it, impressing it enough for it to want to join your gang.  Alternatively, you can shoot it with a buddy pellet from your slingshot before defeating it to increase the likelihood it will join you.

Back at the recruitment center in your base, you’ll see monster cards of the monsters currently looking to join up.  These come in bronze, silver, gold, and prismatic, based on stats and number of abilities and rarity.  Each monster also has a “fee” they need to actually be recruited.  These can be gold or a number of resources that are harvestable out in the world, with higher level monsters needing increasingly rare resources to come on board.

While you can have three monsters in your party at once in Dragon Quest Treasures, some are more useful than others.  They will gain experience and level up, have a variety of stats and abilities, and will carry all that heavy treasure you find in the wild,  however unlike Pokemon, monsters don’t evolve.  This means if you want a more advanced version of a monster in your party, you’ll have to recruit it manually out in the field.

Monsters also have world exploring abilities, like launching you up to higher areas, sprinting across the world, gliding from high places and sinking beneath obstacles, only to reappear on the other side.  You’ll have to put all of these abilities to good use if you want to find all of the secrets on each island.

Monsters in battle will use their abilities automatically, with the exception of a screen filling finishing move, that you can activate.  You can order your monster party to go all out against a foe, or group around you in a more defensive posture, but these are the only actual orders you can issue to your monsters.  You can feed them a variety of different foods, however, with their favorite foods having the greatest effect at giving them temporary stat bonuses.  You can also equip your monsters with more permanent stat boosting monster medals, which drop rarely from defeated foes out in the field, and come in bronze/silver/gold varieties.

One nice thing about defeating monsters out in the wild and unearthing treasures is the fact that all of the experience you earn will not only go to your party monsters but also the monsters hanging out back at your base.  Back at your base, you can send teams of three monsters out into the wild, in the hopes of procuring rare resources or valuable treasures.  These missions can reward you with maps to treasure dungeons, monster medals, rare resources, locations of npc treasure hunting gang locations that you can raid for their treasure, locations of metal or bejeweled monsters and even iconic (usually the most valuable) treasures.

Speaking of the treasures in Dragon Quest Treasures, the real star of this game isn’t Erik, Mia, or that damned Metal King Slime that keeps running away as soon as you attack it.  That honor falls to virtual capitalism.  You’ll use your fancy magic compass on each of the islands to find all manner of treasure.  Treasure chests in gold and silver emit screen filling light as you haul them up from your buried location with a flourish.  When you finally manage to haul your prizes back to your base, they’ll be appraised and shower you with gold coins as they fill your vault, the most valuable treasures filling the screen as the word  “iconic” flashes above it in rainbow colored text.  True to your status as treasure protectors, the more treasure you unearth, the more attention you’ll draw from rival gang npc treasure hunters who want nothing more than to steal your hard earned booty.

Treasures come in a number of types, most of which are from past Dragon Quest games.  Your base apparently has a grading facility and will grade your loot from fine to good to excellent to mint, higher graded treasure bringing in more gold, obviously.  There are iconic level treasures, which will bring in millions of coins and bric a brac, which will only fetch a few thousand.  You’ll find everything from horse manure to crystalized horse manure.  As you reach different gold thresholds, your gang will rank up, conferring additional bonuses, such as increased treasure values, more spots for recruiting monsters and the ability to equip more monster medals.  Rival gangs can also attack your base and attempt to steal your most valuable treasures that you’ve stashed away in your Scrooge McDuck like vault, but they generally aren’t any harder to defeat than the ones you’d encounter out in the wild.

In shades of Dark Souls, rival npc gangs will pursue and attack you with their own monster party, attempting to steal your shiny treasure chests.  Thankfully, most of the time, their monsters are comparable in levels to yours and usually one or two finishing moves will finish them off.  You’ll get valuable experience for giving them a sound thrashing, plus possibly rare resources and monster medals as well.  If you find their hidden bases, you can storm the place, taking them all out and liberating their hard earned treasure.

There’s an overarching narrative about finding the dragonstones,  seven gemstones scattered throughout the world in the shapes of various dragon body parts.  Reminiscent of the classic SNES game, The 7th Saga, Dragon Quest Treasures has you racing several other npc teams to be the first to find these dragonstones, however unlike that game, they won’t actually beat you and claim any of these stones if you take too long.  If you just want to go out and find lots of loot, you can almost ignore this aspect of the game entirely, without any repercussions, however, there are several good reasons to go dragonstone hunting.

First, these are some of the most valuable treasures in Dragon Quest Treasures, easily earning you tens of millions of gold for each one.  The later you find these in the game, the higher your gang ranking will be and the more gold they’ll be worth.  Second, there are benefits for finishing the main story, like access to items such as the chimera wing, which will return you to town instantly from anywhere in the world, only acquirable through quests, generally, but once the main story is completed, it becomes a purchasable item.

There’s a multiplayer component in Dragon Quest Treasures, but it’s limited to hiding your treasures and letting people online (or specific friends via password) dig them up and find them.  Of course, your friends and online randos aren’t actually digging up your hard earned treasure, but sapphire colored replicas of it.  These replicas aren’t worth anything in terms of your overall vault total, but digging them up will give you the same number of experience as actual treasure, which can be great for leveling up.  You can also sell these replicas for gold at shops.

One of the best aspects of Dragon Quest Treasures lies in its fluidity of movement.  You can jump on a giant sabrecat and race across the land, only to jump off a high cliff, switch to a flying monster and glide gracefully to the ground.  The ability to run, jump, climb, launch yourself to high places and even use stealth to move under objects to find hidden areas really gives you a freedom of movement that you don’t really see too often, especially in non platformer games.

Criticisms include the fact that there are a few framerate drops here and there, especially in busy areas.  This is most notably seen in places where there are many treasures located in close proximity to each other, as the glowing light surrounding each chest will sometimes lag.  One major criticism of Dragon Quest Treasures is the lack of a fully fleshed out multiplayer mode, with proper monster party battles.

With elements of Pokemon, The 7th Saga, Super Mario Bros and even a little Dark Souls thrown in for good measure, Dragon Quest Treasures is an island hopping, booty finding good time.