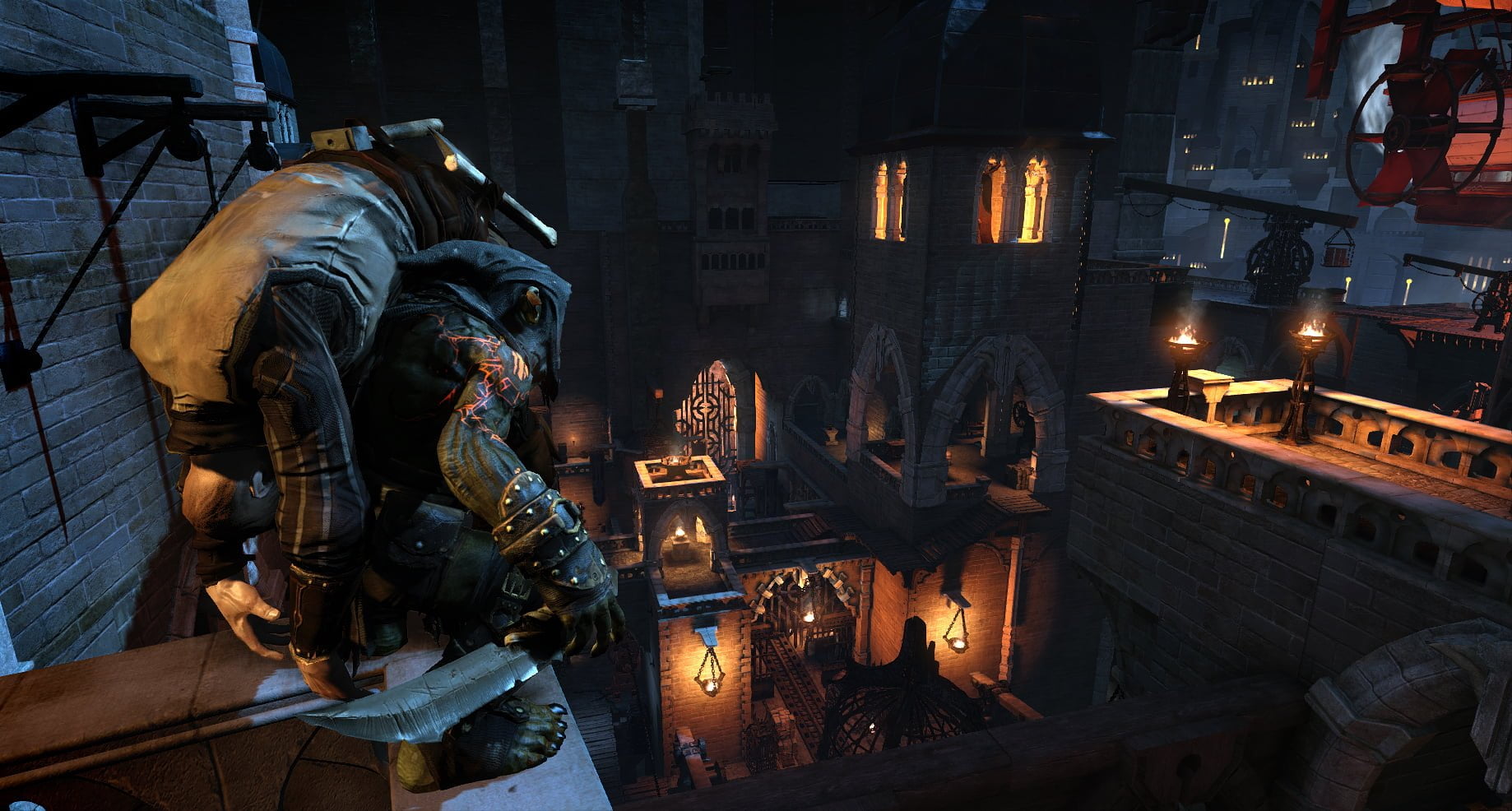 Styx: Master of Shadows, from Cyanide Studio, feels at odds with itself. It’s a stealth game that tries to court two different schools of stealth design: the modern open-ended approach and the classic rigidness of trial and error. For a while, it strikes a fine balance between the two, giving you plenty of room to play around and experiment without fear of an instant game over. But as the game goes on, that balance shits in favor of strict level design, all but abandoning the freedom offered in Styx’s early hours. In doing so, Styx doesn’t attain mastery of stealth so much as mere competency.

As the eponymous goblin, you slink around the tower of Akenash pulling off a number of small-scale thefts and occasionally getting your hands dirty in preparation for a major heist. Styx seeks the heart of the Tree of Life, the source of a substance known as amber, a powerful source of energy and something of a drug among humans. Only, he can’t remember why he wants the heart. He simply wakes in a cell, his desire to obtain the heart of the Tree of Life being the one thing he remembers, which is all he needs to know, far as he’s concerned. The story is told primarily through flashbacks, Styx relaying his exploits while under interrogation. Styx is a very callous character. He’s a crook through and through, concerned only with getting what he wants through whatever means necessary.

Each mission begins with one of these flashbacks, acting as a debriefing on what’s next. From there, it’s back to the hideout to upgrade skills and restock your inventory before heading out into the field once more. You can also replay previously completed missions to earn insignias from challenges like finishing a level with no kills or without being seen, which grant additional skill points. You can technically do those things on your first pass through a mission, but the menu doesn’t display your progress toward getting those insignias until you replay it, making it difficult to complete some of the challenges.

The levels in Styx are large and intricate. Numerous paths lie before you, giving you full control over how to approach any given situation. All the usual nooks and crannies you’d expect from a stealth game: wall hooks allow you to ascend and stay out of sight, while crawlspaces and tables give you a place to hide while sneaking about on ground level. But the size of the levels serve more than just that one purpose.

Tokens hidden in the furthest reaches of each locale entice you to explore, while the general scale of the area leaves you constantly wondering which path is your best bet. There were plenty of times where I’d end up straying far from where I was supposed to be because I thought I might find a quieter road than what the straightforward approach offered. Oftentimes that exploration led to trouble – a wrong turn that put me right in front of a pair of guards or a group of nasty bugs sensitive to sound, or a path that sent me back the way I came. Even when exploration turned up nothing, however, it helped me plan better for the next run should I get myself killed somehow. (Which I did. A lot.)

Failure doesn’t feel too frustrating in that regard, because if one approach fails, you’ve got a bunch of options to fall back on. Groups of guards can be bypassed by turning invisible and waiting for them to pass, stationary foes can be drawn out by vomiting up a clone and sending him out to catch their attention or latch onto them so you can walk on by unnoticed; or you can simply throw a knife and destroy the body with acid. Drop a chandelier to create a distraction, or, if all goes to hell and you’ve nowhere to run, take them head-on in combat with a few well-placed parries. You’re almost never at a loss for how to handle any situation.

I say “almost” because there are times where you are constrained – at least under certain circumstances. Occasionally you’ll reach the end of an area and the only way forward is through a small gate protected by a couple of knights. Now, knights are special because they cannot be fought; attempt to battle them and you’ll get cut down in one shot. Can’t throw knives at them either, because their helmets protect them from such attacks, including stealth kills. So you’re only option is to sneak past them. That’s not a problem so long as you’ve got enough amber to turn invisible or create a clone, but in the event you don’t and lack any backup vials, you’re stuck. At which point your only option is to reload an older save or restart the area entirely and be more careful with your amber consumption. In a game filled with options, cases like this greatly discourage experimentation.

There was one moment in particular that stands out. I was at the end of a mission, about to make my way to the exit. The bridge leading to it, however, was packed to the brim with guards. Now, under ideal circumstances, I could have used invisibility to creep past them all with ease. But I didn’t have enough amber, nor any spare vials, so that wasn’t an option. Fighting my way through wouldn’t work because the odds weren’t in my favor, nor were stealth kills much an option either due to the lack of cover. As soon as I’d kill one silently (which takes a few seconds), I’d be spotted before I could even begin to dispose of the body. And since it’s a bridge, I could only move forward through the throng of guards. I eventually figured it out after a half-hour of failure after failure by way of running through the area as fast as possible, not caring if I’d drawn the security’s attention.

It’s a problem compounded by the fact that you end up traversing the same few environments multiple times. Guard placements and patrol patterns may change, and new foes introduced, but generally speaking, once you’ve gone through an area once, you know how best to tackle it. Going through levels backward does certainly bring some fresh challenges along – namely in making paths you relied on once before not working so well when tackling the level in reverse – but they’re short lived in light of your newfound familiarity with the environments.

Content recycling becomes more common the deeper you get into Styx, fresh content drying up roughly around four or five missions in. New enemies make up the difference, but they also steadily push the game closer toward crippling cases of trial and error. Archers can slay you from afar with a bolt or two, ogres kill you if you happen to be within their vicinity upon waking up, elves can sense you whenever you’re within a certain distance, and the aforementioned knights are impervious to direct attacks or stealth kills. They do manage to keep things interesting by forcing you to employ different tactics – unlatching crates hanging from the ceiling onto unsuspecting guards, for instance – but do to do by giving you no other choice flies in the face of the freedom offered to you earlier in the game.

If that sounds up your alley, however, Goblin Mode is for you. In it, stealth is literally your sole option. All enemies can kill Styx in one hit, parries no longer an option. It’s tough and sometimes unforgivable, but it’s also a challenge of you choose to take part in. That it essentially becomes one giant game of trial and error is fine then because it’s an option – something you can avoid entirely if that’s not the kind of stealth gameplay you enjoy.

Which makes it all the more disappointing that so much of Styx fails to live up to that same promise. Its early hours provide fantastic open-ended stealth, while the later levels steadily become more reliant on limiting your options to create challenge. Styx: Master of Shadows is a fine game by all accounts, but one impaired by its steady descent into rigid design.