Throughout my time playing Dark Souls 2: Scholar of the First Sin, my stance on it constantly shifted. At one moment, I might think it a better version of Dark Souls 2, making all sorts of smart, small changes to streamline and improve the overall experience. And the next moment, I might think it a step back, a game that equates challenge with pure brutality, revising previously balanced encounters into nightmares of artificial difficulty and unfairness, overwhelming at every turn just for the sake of making things harder because From Software could rather than because they should.

Even now, having finished the game and messed around with new game plus, I still don’t quite know where I stand. Is it good? Is it bad? Is it better or is it worse? I don’t know. My answer to those questions changes depending on the day. And even then, I’m always second-guessing myself, uncertain on how to pass judgment on this confounding game. It makes tons of smart tweaks, but bogs them down by its insistence on making the game harder – and not necessarily for the better.

Dark Souls 2: Scholar of the First Sin is the “game of the year”/”definitive edition”/remaster of Dark Souls 2. It includes all the DLC that came out last year, improves the graphics slightly, and tweaks enemy and item placement to make the game feel fresh once more for returning players. It’s basically an excuse to release the game on PlayStation 4 and Xbox One, though it at least goes the extra mile to make this version differ in ways other than better performance on console.

Scholar of the First Sin is essentially a refined version of the original. Most of the small problems with the game – such as the lack of equipment variety in the early goings – are now fixed, creating a better experience overall. Progression is more open-ended, allowing you more freedom to tackle its levels in whatever order you so choose. It has more options for equipment early on, meaning you don’t have to trudge through more than half the game to get your build properly set. And best of all, you can now summon three people for co-op instead of two, which completely trivializes any roadblock you find yourself stuck at. Little things that make a huge difference.

The biggest change, however, are the enemy locations. Multiple areas throughout Scholar of the First Sin are populated by far more enemies than they were previously. The first area, the Forest of Fallen Giants, now has a space littered with hollowed foot soldiers – at least 12 or 15 of them as opposed to the four in the original game. There’s also an ogre – one of those large, hippo-esque monsters – hanging around the entrance to the area as well. And those are just the tame examples. The Pursuer now appears frequently throughout The Lost Bastille, the Iron Keep has more Alonne Knights that attack in packs while archers pelt you with greatarrows, and the Dragon Aerie now has hordes of undead who release corrosive acid upon exploding.

Some of these instances make certain encounters better and more manageable. The aforementioned spot in the forest? While there may be more soldiers there, they only rise one at a time as you get close to them, instead of them all charging you immediately upon your arrival. It’s one of those cases where it improves something over the original. The entirety of Drangleic Castle is another, wherein enemies are more reasonably spaced out, allowing you more moments to fight one-on-one than against pairs or groups. The stone soldiers that litter the area are no longer a nuisance that can only be dealt with from afar.

Examples like those play to the strengths of Dark Souls’ combat while retooling those encounters for the better, to make them more interesting and fair. They seem worse at first glance, but reveal themselves to be nowhere near as frightening as they appear. It’s a clever bit of deception, which the game uses extensively to goad you into being on guard, but also trick you into underestimating the situation. As someone who clocked a couple hundred hours into the original version, the biggest challenge wasn’t so much the remixed elements, but learning to forget everything I remembered about the game.

For every section that’s been improved, however, there are just as many areas where Scholar of the First Sin regresses. The Iron Keep is a prime example because it relies on sheer numbers to bolster the difficulty. Where in the original game you could at least always take each knight on solo, here you’re rarely so lucky. You can’t draw them out one at a time, as they always pull in packs, meaning you’re forced to fight groups of them. As anyone who’s played a Souls game can attest to, combating multiple opponents is far from ideal. The game just isn’t designed with that in mind. And yet… here we are.

The Shaded Woods are another one. Where before it was primarily populated by lions, it’s now made up of transparent foes who you cannot lock onto. In the brief foggy segment, it works to instill a sense of fear, as they often strike before you notice their presence. The lack of lock on felt like a result of the low visibility of the space rather than merely a case of cruelty on the game’s part. But without that context, it simply feels cheap and unfair; a case of leveraging the weaknesses of the combat to create artificial difficulty. 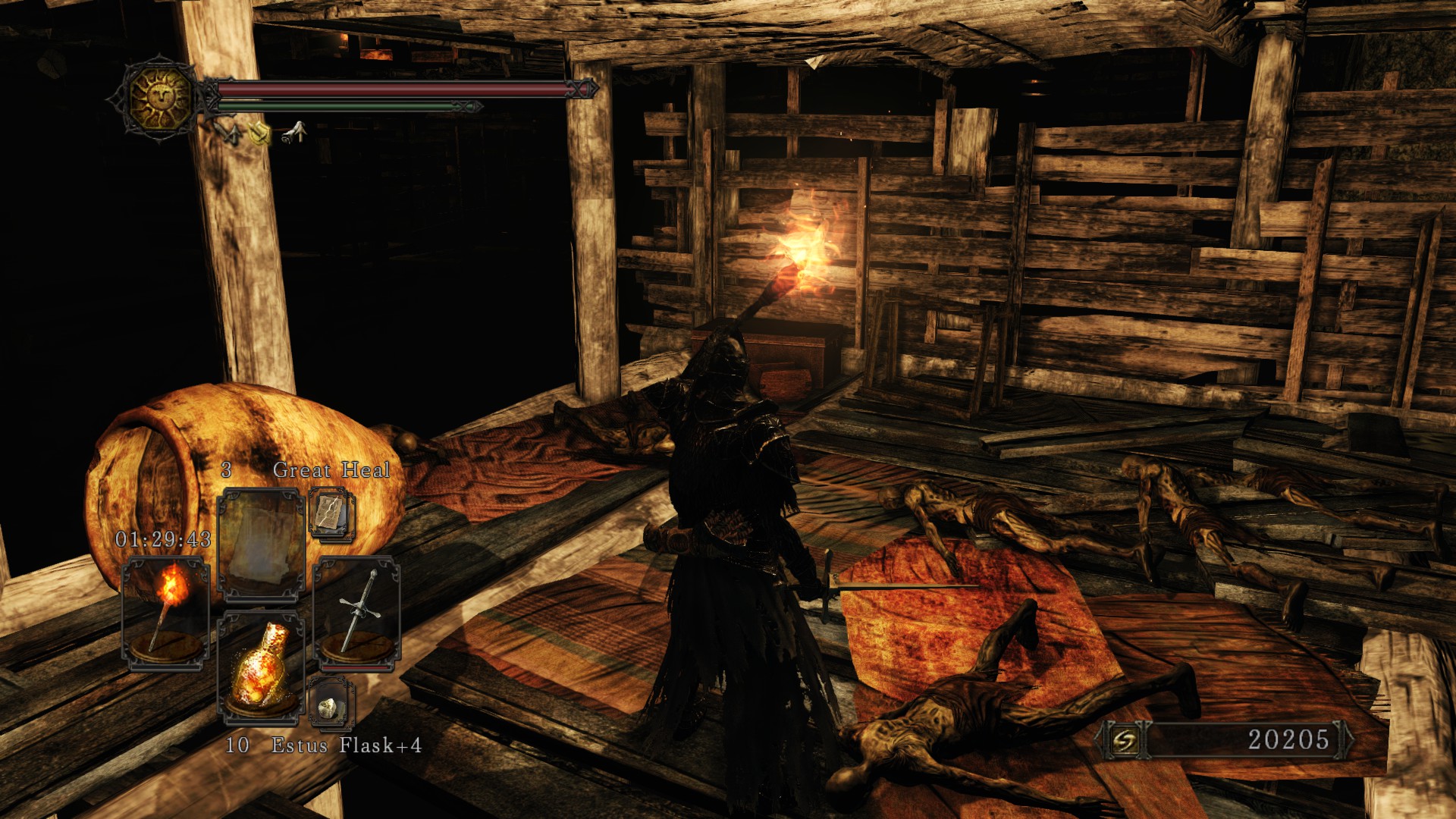 And that’s the thing: most of the changes to enemy placement are done for the sake of context. Adding the Heide Knights – those white-armored fellows who always sat around in random spots in the original game – to Heide’s Tower of Flame just makes sense. It’s all in the name of lore-friendliness, which is great. It enriches the world by providing cohesion between these spaces and the people who inhabit them. Such as how hollowed soldiers can be seen attacking the corpses of giants, still fighting a war that’s long over, or how people continue to mine for minerals in Tseldora.

Little touches like those are what make this version so much more interesting. It adds character to the world by giving its inhabitants a purpose that isn’t acting as another obstacle to cut down with your sword. It further illustrates the nature of what being hollow entails and the complexities of it. Before, the most Dark Souls 2 did to explore that were the homely spaces in The Gutter – an immaculate underground village at the bottom of a hole in Majula – where hollowed folks could be seen sitting around relaxing in well-furnished rooms. Now it depicts them in a variety of ways. It supports the narrative focus on the soul, our sense of self, and what it means to lose that.

Which is why it’s so frustrating when the game abandons that adherence to context just to squeeze out a few more drops of challenge. It’s the little things that make Scholar of the First Sin a better Dark Souls 2, not increasing the challenge for the sake of making the game harder. The gameplay enhancements come from encounters that have been refined to be fairer – or easier! – than those that aren’t, because they make for a more enjoyable, balanced experience.

For all my reservations, I still enjoyed Scholar of the First Sin. It’s still the same game, mostly, and the improvements definitely make a difference. I just wish its ideas of refinement didn’t correlate better with harder.