Last time I saw Manifold Garden it went under the name Relativity. The game hasn’t changed much since then. The demo this year showed same level from last year, only more fleshed out. I didn’t mind, though. I’ll take any chance I get to poke around in its stunning world.

Manifold Garden is a puzzle game wherein you explore intricate works of architectural splendor. The demo started off with a series of rudimentary block puzzles spread between a series of rooms that became more difficult over time. Each block needs to be placed on the panel of the corresponding color to open the way forward. Simple stuff on paper, but it quickly becomes fiendish once it starts playing with gravity. By stepping up to any wall and pressing R2, the world shifts the center of gravity, thus allowing you to walk on that surface. For the indoor sections of the level, it means a lot of running around on walls and ceilings as you move the colored blocks to their respective receptacles. In the outdoors, however, it opens up endless opportunities to explore.

I only played through a small part of the first level last year and the difficulty progression seemed pretty steady at the time. Having played the full level now, however, it doesn’t waste time in throwing more complex problems at you. Not because they introduced new mechanics or variables, but because the rooms themselves require you to think in multiple dimensions, especially as they start incorporating more abstract elements. One room in particular had a staircase that began on the ceiling and stopped a little ways short of the floor. One of the blocks needed to be placed on there, but it was just far enough out of reach that I couldn’t simply place it on the ledge of the lowest platform. It had me stumped for a good while. And this was still with the basic toolset. I can’t imagine how much more complex the later puzzles will be. 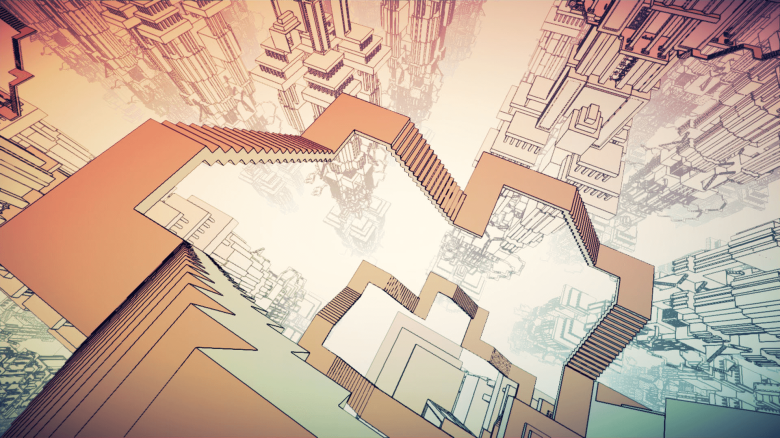 The level had me hopping between different ends of the area to power up towers that revealed the exit at the center of the structure. Once I’d opened it, a floor panel opened to reveal a winding staircase leading down – though since I was standing right on top of said panel, I ended up falling down the shaft instead. At the bottom stood a small portal that led to the next level. Looking at it from the front showed a long corridor, but looking at it from the side revealed it was nothing but a thin piece of wall. Felt a bit like Antichamber there.

The next area was pretty plain from what I recall. Lot of large, rectangular slabs of land along with a block or two lying around. Didn’t get a good look at it because I was distracted by the presence of another portal. This one led to the slope of staircases shown at the top of the article. There weren’t any immediate signs of puzzles anywhere, so I took it as an opportunity to sit back and gaze in wonder at the spectacle of it all.

Though the blocks seem to serve as the primary obstacle in Manifold Garden, just figuring out how to traverse these spaces seems like it could very well be the real puzzle. The structures that make up each level are massive and intricate. Though a lot of the levels I’ve gotten glimpses of look like fancy buildings, some of them feel more like abstract art. Something to be observed and admired from a far instead of a structure meant to be traversed. But that’s also what makes its environments so compelling. If I wasn’t pressed for time, I would have gladly just spent my entire appointment wandering around each level examining it in great detail, because simply exploring these beautiful spaces is enough to get me excited.

Manifold Garden will be released on PC and PlayStation 4. It doesn’t currently have a release date.