I have to make an admission: I quit trying to get into Kingdom Hearts early. I gave my best trying to play the original games on PlayStation 2, but after some horrendous platforming, I gave up. The series lore is one of the most hyped things about it, but for that very reason, I was never able to get into the many sequels and prequel games that have come out since. It all felt impenetrable to me. Even the main draw of the franchise, the tie-ins with Disney properties, wasn’t strong enough of an incentive to keep trying, and given that there are just so many other games to play, it never gave me enough reason to make more of an effort.

And then comes Kingdom Hearts III. It’s so purdy. It has Toy Story in it. I love Toy Story to death. Hook, line, and sinker. I had to try it. And so I did yesterday at Brazil Game Show. Lo and behold, I had a great time playing it! I totally glossed over story details, but from the little of it that I did absorb while testing the game is that Sora, the little dude you play as, can’t go into details about why the Heartless, the baddies, are invading Toy Story’s world. Outside of that, it was neat to see Toy Story’s visuals perfectly realized in true video game form. 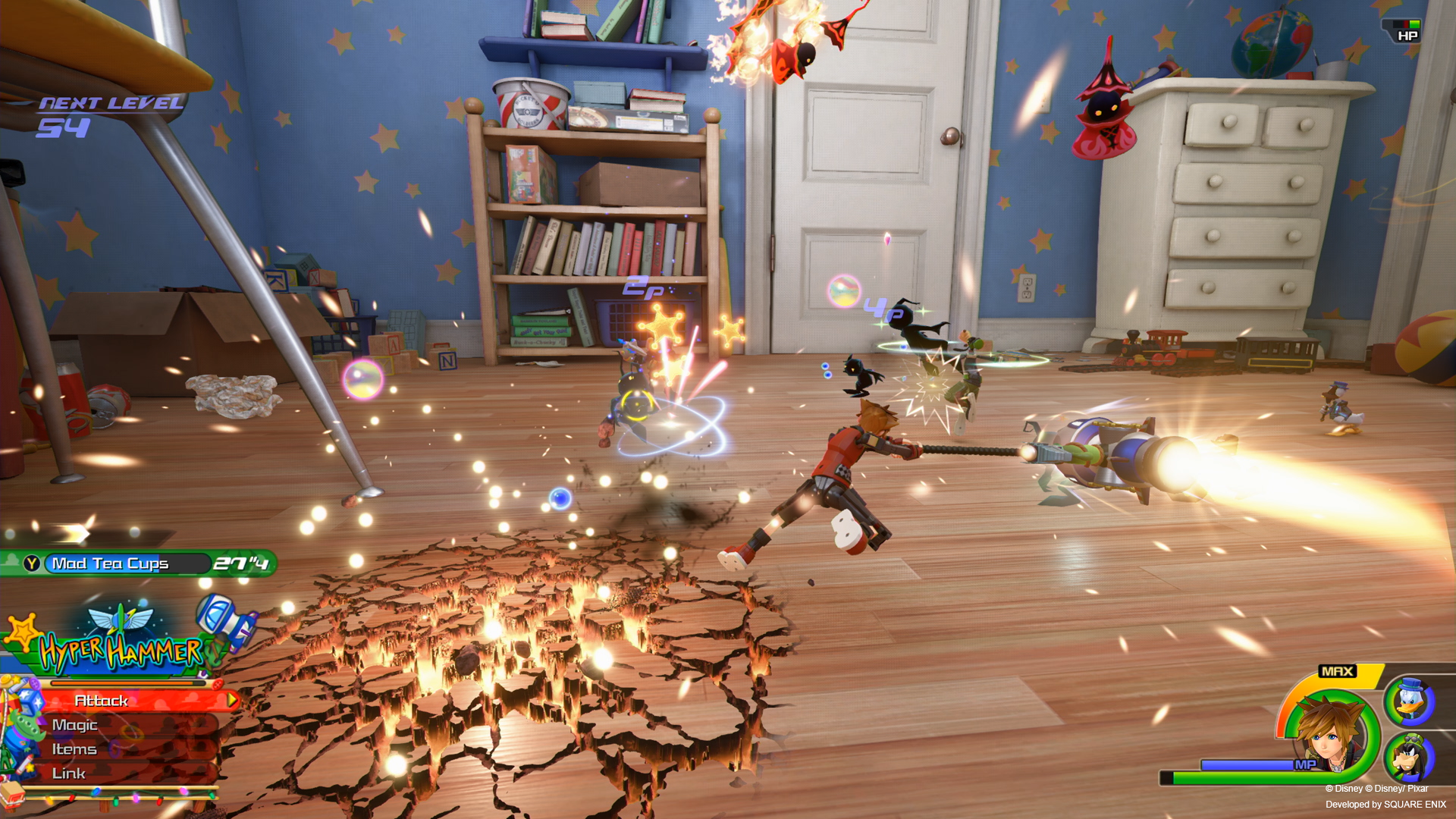 It seems that it was so long ago that Sony promised real-time graphics on the level of Pixar’s productions, and now we’re finally getting that in games. The amount of detail on every single one of Toy Story’s beloved characters is staggering to see, down to wear and tear damage that actual toys would have, not to mention the animation and voice work. It’s also really neat to see how Square Enix introduced the J-RPG conventions into that world, with Rex and Hamm geeking over Sora, Donald, and Goofy because they just happen to look like video game heroes in that universe, and given their guise as action figures, the three fit right in, much to Buzz Lightyear’s suspicious dismay.

The trio fought bunch of Heartless in Andy’s room, the whole thing going down in an arena that gave me direct control over Sora, and allowed me to combo every living being into submission with his keyblade (which turned into a hammer in Toy Story’s hub). I always thought that Kingdom Hearts’ combat was a little too simple, but it proved fun in the demo, even though it took me a bit of time to notice the menu on the corner of the screen that gave access to more skills like a traditional J-RPG, so it was only after three or so of these fights that I finally chucked a fireball or two.

Everything led to Sora and his pals, along with Woody and the Toy Story crew making their way to a huge toy store, where one of the villains suddenly appeared and made all of the toys there come alive and become evil. That’s when the mecha gameplay came in, and hell, I’m all about mecha. Sora could fight on the ground normally or jump into a toy ‘mobile suit’ and waste the opposition, which I did with pleasure. Cannons, punches, and special electrical attacks comprised his move set while inside the robot, and that fight proved to be quite hectic and fun. While I found fights to be largely not as involved as much as, say, one in Final Fantasy XII, they managed to pack a certain amount of punch just in the sheer number of enemies that you have to take out.
And with that, the demo closed. I have to say, Kingdom Hearts 3 impressed me. On one hand, I’m not 100% sure that’s because of the reasons that Square Enix wants me to be excited about this finally coming out — that is, as a die-hard fan of the franchise and lore, which I certainly am not — but they most surely have me for the tie-ins to Disney and the simpler gameplay that’s served in between dives into its many worlds. If all of them are as lovingly detailed as Toy Story’s, I might be into the idea of coming back and trying to learn Greek, I mean, Kingdom Hearts!

Kingdom Hearts III will be hitting PlayStation 4 and Xbox One early next year on January 25th.